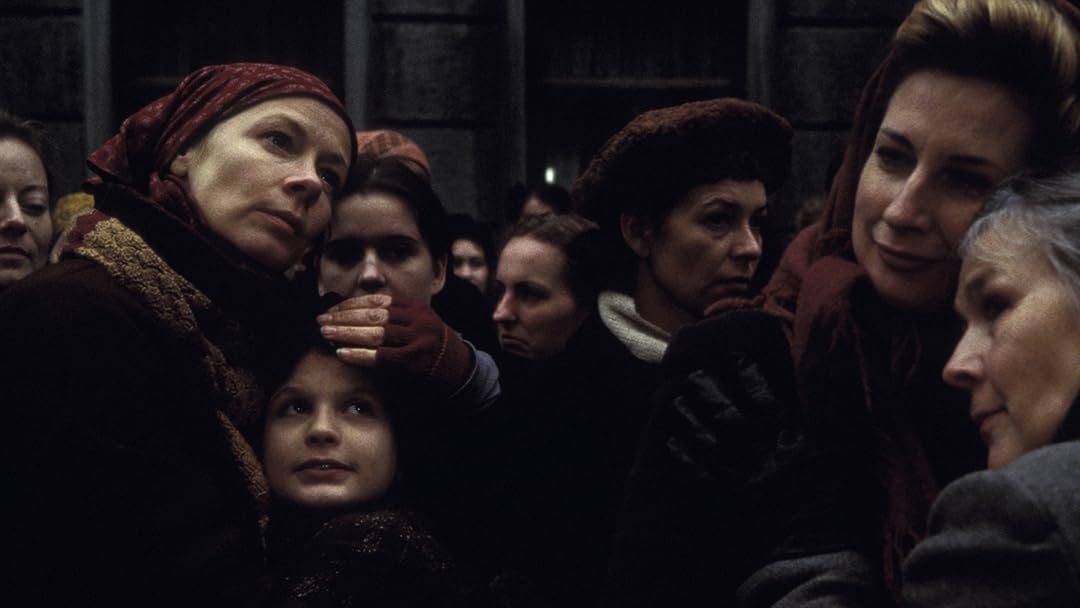 (171)
6.72 h 16 min2004PG-13
After the death of her father, Hannah becomes concerned with the strange behavior of her mother. As her mother's troubled childhood is revealed, Hannah realizes how little she ever knew.

IkeReviewed in the United States on February 14, 2019
5.0 out of 5 stars
Powerful and Moving
Verified purchase
I am forever learning new things about the holocaust and this film provided the latest lesson. Like most people, I originally envisioned that holocaust as being a neat well organized process, in which all the German participants were sneering SS types. The disabuse came first with Maus, the graphic novel/memoire by Art Spiegelman, which showed the holocaust to be a messy affair with victims trying and sometimes succeeding in staying under the radar. This film adds a dimension I had never considered, namely, what was the fate of Jews who happened to be married to Germans. Of course, such things occurred, and the film traces the heartbreak of such couples as they struggle for survival against the system, and the impact on survivors. Suspenseful, moving and masterfully done. It is well worth your time.
8 people found this helpful

GenoReviewed in the United States on May 29, 2017
5.0 out of 5 stars
Wow
Verified purchase
Made a 240 pound security officer sob.This may be one of the best movies I have ever seen.
22 people found this helpful

DetectorReviewed in the United States on January 9, 2018
3.0 out of 5 stars
The aryan wives are like the women in white who plagued Chilean dictators demanding ...
Verified purchase
German language film, which is a little confusing, since almost all the characters we meet in contemporary times live in America, and one is Nicaraguan, but they all speak German all the time, except for the occasional english phrase...just as if they were all Germans living in Germany. OK, never mind that, I understand its for a German audience. They paper that over, its ok. Initially, film leads us to believe that hannah's mother will be a central character in the film, but she's not; that turns out to be the Duchess. whose husband is a jew, and she saves hannah's mother during the holocaust, simply by taking her home and calling her daughter. The aryan wives are like the women in white who plagued Chilean dictators demanding to know what happened to their disappeared ones. Against all odds and expectations, they suddenly, and inexplicably succeed. We don't find out why, perhaps the answer is simply unknown to history. OK. So, Hannah learns from the kind Duchess to understand her mother and her mother, we find out so suddenly that its disturbing like a jumpcut, is transformed, reconciled to her daughter and to her marriage to a non-Jew. The ending is the celebration of a new generation assimilating, against religious and tribal prejudice. The feeling I get, is it was made to make you feel a little better about being German because there were a few very admirable, steadfast German heroines who rescued their Jewish spouses. That's cool, I suppose Germans could use a little something to feel good about their heritage vis a vis the Holocaust. But there's an unreality about the Jewish characters throughout, as if we are looking at them through a glass darkly, and we think we're going to get to know the mother, but we don't get to know her at all, we get to know the Duchess and the struggles that the German characters go through either opposing, supporting, or being equivocal about Nazi racial policies. The Jewish characters, I find out, are just cut-outs. I dunno, it made me cry a little, but in the end, I felt kind cheated. It initially seems to to be about the development of the Jewish characters, but it isn't, it's really an analysis of German character and the dilemma of living as a non-Nazi, or partially Nazi Aryan in a highly Nazified society, and the Jewish characters are not examined.
5 people found this helpful

Me2Reviewed in the United States on March 10, 2021
5.0 out of 5 stars
Another important story from WWII
Verified purchase
Aryan wives of Jewish husbands; I hadn't really considered the consequences of these "mixed" marriages for these couples (as well as Aryan men married to Jewish wives). Such could mean death for both during those horrific times.
This was a very long film, but it was a long journey for those involved too. Even though the story merged back and forth between the generations, the makers did a good job of meshing them too.
Little Ruth represents so many confused and terrified children who suffered and survived, scars and all.
By contrast today's angst of the things we get bent out of shape about pale when one watches these films.
I prefer the ones based on true circumstances as well as those telling personal experiences.
Every time I finish a movie like this, I just seem to have a need to stop..... reflect and think.
Before moving on to more mundane things of life.

raymond s.Reviewed in the United States on January 10, 2020
5.0 out of 5 stars
A Wonderful Film
Verified purchase
Berlin, February/March 1943: we learn of a very heart wrenching, (an understatement) and peronaly tortuous time. We are shown only only a week of this era. Trying to imagine this time as your new norm for the past ten years with no end in sight is something not one of us who was not there can personally grasp. And hundreds of thousands if not millions of people lived through this world every day. Here we get a snapshot.
Production values are high. Really good depictions of 40's Germany. Only problem and this is so small, I would not want to be our protagonists boyfriend on the other end of their phone call. Perhaps it's a script malfunction.
Watch this. You will learn, you wil will love these people and you can't miss.
2 people found this helpful

R. TappReviewed in the United States on February 7, 2017
4.0 out of 5 stars
This film will break your heart
Verified purchase
An amazing true story about "mixed marriages" between German women and Jewish men in Nazi Germany. Don't be put off by the way the film begins, at a somber Jewish funeral ritual where relationships are unclear and family tensions run high. Stick with it and things will become clear. This is a part of WWII history that was unknown to me and I am glad it has come to light.
17 people found this helpful

SarahReviewed in the United States on August 6, 2021
5.0 out of 5 stars
Interracial marriages during the Nazi Regime - amazing film
Verified purchase
I found it a fascinating part of history to watch as the Rosenstrasse protest in Berlin actually occurred in 1943 and the majority of German women were able to get their Jewish men back, so that they were not deported, but their is no talk of the Jewish women, which in the film made it appear they were all deported. It was sad to learn that the German men married to Jewish women divorced them under pressure as the film relays, which then made the Jewish women deportable. Its a very well done movie as it was the only mass public protest by Germans to take place during the Nazi regime.

Katerina RobertovlaReviewed in the United States on September 19, 2018
1.0 out of 5 stars
Amateurish. See recommendations on better films.
Verified purchase
Actors were okay Script was okay; however very little dramatic action. The pace was S.L.O.W. Just an amateur production. The beginning and ending were very improbable and overacted. Don't recommend. There's so many superior films about WWII, such as "Europa, Europa," "Lucie Aubrac," "Ida," "Defiance," "The Reader," and more.

You'd have to buy a DVD of "Lucie Aubrac," as it's nowhere on any streaming service. Love Daniel Auteil and Carole Bouquet, who play Raymond and Lucie Aubrac. A true story, very compelling.

"Ida" won the 2015 Academy Award for Best Foreign Language Film, becoming the first Polish film to do so. Excellent film.
4 people found this helpful
See all reviews
Back to top
Get to Know Us
Make Money with Us
Amazon Payment Products
Let Us Help You
EnglishChoose a language for shopping. United StatesChoose a country/region for shopping.
© 1996-2022, Amazon.com, Inc. or its affiliates