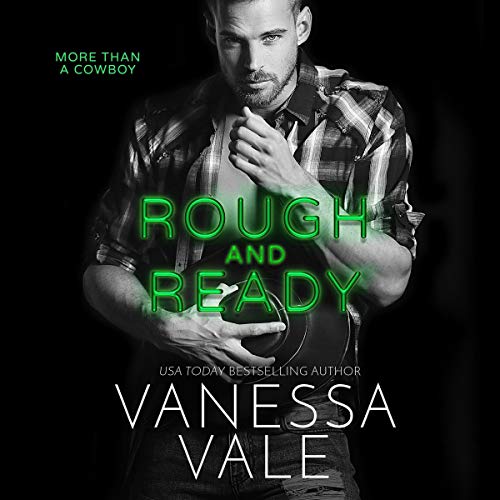 Rough and Ready: The More Than a Cowboy Novels, Book 2

Reed Johnson grew up on the streets rough and ready with his fists to survive. These days, all his fighting now is done in the ring. With the Outlaw as his coach, he’s way more than a cowboy. That was enough for him - until he meets his new neighbor.

Harper Reed is running from a dangerous past, but no matter how hard she tries, it follows. This time, she’s not alone. She runs right into the arms of Reed. She is his now. His to protect. His to save. To do so, he’ll have to return to the life he’s left behind. But the brainy PhD is worth the fight and with her, he’ll be ready for anything. Even something he never thought he deserved. Love.

Enjoy a free audiobook + more
Learn more about Membership
List Price: $25.87
You Save: $3.23 (12%)
By completing your purchase, you agree to Audible’s Conditions Of Use
Sold and delivered by Audible, an Amazon company
Share

4.6 out of 5 stars
4.6 out of 5
272 global ratings
How are ratings calculated?
To calculate the overall star rating and percentage breakdown by star, we don’t use a simple average. Instead, our system considers things like how recent a review is and if the reviewer bought the item on Amazon. It also analyzes reviews to verify trustworthiness.
Top reviews

Donna Repsher
5.0 out of 5 stars Hot, sexy, suspenseful and sweet--a great combination
Reviewed in the United States on March 19, 2021
Verified Purchase
I've been a Vanessa Vale fan since I got hooked on her Bridgewater series, but Rough and Ready, the second book in her More Than a Cowboy series, told in dual narration, was one gripping and emotional read, and aside from my personal ambivalence about insta-love romances in general, this was just such a well-written, angst-laden romance that it earned a 5-star rating from this reader.

We first meet Harper, our heroine, and she's in hiding, not only from a couple of thugs, but from her own brother, Cam, who'd been the apple of his wealthy parents' eyes all of his life, while Harper, who became a college professor, was treated as a disappoint by her parents. Cam has also been a bad boy, a criminal, a gambler, and a miserable excuse for a brother to Harper. He's due to be released from prison, and Harper, who testified against him at his trial, has been promised vengeance, and expects it. Harper thought a new phone number and a new location would keep her safe, but Cam is already calling her new phone, and knows where she is. When Cam's parents bailed him out of trouble the last time, they paid Harper hush money to remain silent, and it's that money that Cam wants, to pay off a large gambling debt to a loan shark. At first, he "sold" Harper to the loan shark as payment for that debt, but since she fought off the two thugs who decided they'd rape her before handing her over to their boss, that deal fell through.

She's just moved into a safe apartment, the building and training gym on the ground floor owned and run by Grayson, who was the hero in the first book in this series. When she's in the elevator, the doors slide open, and the man on the other side of those doors is huge, rough-looking, muscled, covered in tattoos, and he scares her half to death because he reminds her of the two henchmen who tried to rape her, also in an elevator. But this is the first time she's set eyes on another tenant, Reed, an MMA fighter, who is not only her neighbor, but who trains at Grayson's gym.

While Reed looks like a thug, he's anything but. His history, growing up on the wrong side of the tracks, raised in poverty and with horrible parents, should have turned him into a criminal like his father, but there's way more to Reed than meets the eye. He's doing well as an MMA fighter, but doesn't think he worth much to a woman like Harper, but his rough exterior hides a sweet guy with a good soul, and although he doesn't think he's worthy of Harper's affection, she's someone he really wants and desperately needs, and although Harper is frightened by him at first, he's someone she needs too.

In what at first appears to be a contemporary riff on a Beauty and the Beast tale, this novel is way more than that. At it's heart it's about two lost and frightened souls who try to save one another, and who learn that although they may at first be either drawn to or frightened by outward appearances, what's really important is seeing the the heart, the soul, the goodness, and the kindness of a person, hidden behind that mask. As Harper and Reed get to know one another, Ms. Vale turns on the heat, and while she's a pro at writing steamy sex scenes, the sweetness, sensitivity, and tenderness of those scenes in this novel were a thing of beauty. While Harper would prefer to keep on running and hiding, Reed chooses to do the exact opposite.

All in all, this may just be my favorite read from Vanessa Vale. It's rough, there's violence, there's fear, and graphic sex, but what won me over was the suspense and the well-drawn characters, and their passion and compassion for each other. This was an excellent read, and I'm happy to recommend it.
Read more
4 people found this helpful
Helpful
Report abuse

Denise DeCrescito (From In Here)
5.0 out of 5 stars Excellent , emotional story with interesting characters
Reviewed in the United States on March 19, 2021
Verified Purchase
“Rough and Ready” is book 2 in the More Than A Cowboy series from Vanessa Vale. Even if you’re already a fan of the author, like me you may also find that this book delivers more than you expect in terms of emotional impact and drama. It is a stand-alone, so you need not have read the first book in the series in order to enjoy this one. If you’ve read that first book, you’ll definitely recognized familiar characters, including Reed, the hero of this story.
Reed is an MMA cage fighter. His childhood years were brutal, he served time in juvenile detention 4 a serious crime, then spent years in the military, and after that he redefined himself as a successful, professional fighter. He knows that Harper, his brilliant and beautiful new neighbor, is way out of his league in every way. Harper is a college professor whose elegant demeanor hides a lot of painful secrets and stress that she lives with every day. She engages in risky sexual behaviors and almost compulsive physical exercise both for the same reason … she is trying to escape feelings that she just can’t handle. Despite their differences, the physical chemistry between them is as hot as a raging inferno. There are great secondary characters, including multiple despicable villains.

Harper and Reed are about as opposite one another as a couple can be and yet these 2 battered souls complement one another incredibly well. There was some very interesting role reversal in this book – when you read it, you’ll understand what I mean. You may find tears in your eyes a couple of times, but don’t be embarrassed about it because you’re not alone! There are some light moments judiciously scattered throughout this fast-paced story. I expected this would be a good book, but thr depth of gritty emotion in it really blew me away. Vanessa Vale, please let that seriously hot bad boy Frankie share his story with us!
Read more
2 people found this helpful
Helpful
Report abuse

Romancing the Dispatcher
5.0 out of 5 stars This book is emotional. And amazing. A roller coaster of chemistry, drama, and heat!
Reviewed in the United States on March 16, 2021
Verified Purchase
This book was emotional. And amazing. And kinda hard to read in some parts. Don't get me wrong, I devoured each page, not wanting to put the book down, but their story was harsh. Harper and Reed both had a past that made me want to weep for them. I'm all over the place with this book. But in the end, their story is full of hope for a life of happiness, even for the most damaged souls.

Harper is a runner. She runs to escape. She runs to forget. But her past is about to catch up with her, and this is something she can't outrun on her own. Then, at her lowest point, Reed becomes everything she never knew she needed! However, no matter how perfect they seem to be for each other, there was so much standing in their way!

This book was awesome! A roller coaster of up and down emotions, but still plenty of chemistry and an amazing connection between the main characters. I'm absolutely in awe of how great this book was! Definitely one that I will read again!
Read more
One person found this helpful
Helpful
Report abuse

Shweet Sandi
5.0 out of 5 stars Knock of a book
Reviewed in the United States on March 24, 2021
Verified Purchase
I always know when I get a Vanessa Vale book I am going to get a sexy good read. And she does live up to the hype once again! This is the second book in this series but you do not have to read them in order to understand or follow along with what is going on. Harper is friends with Emory and her fiance' Grayson who have given her a place to live there in their complex. Reed is her neighbor and an MMA fighter. He is big, burly, and let me tell you he will protect those he feels are taking advantage of or hurt. He has this instant draw toHarper when her brother Cam's past comes back to harm her.
This is not a lovely dovey book but a down and dirty one that will hit you in the gut and heart. Ms Vale does it again!
Read more
One person found this helpful
Helpful
Report abuse
See all reviews
Back to top
Get to Know Us
Make Money with Us
Amazon Payment Products
Let Us Help You
EnglishChoose a language for shopping. United StatesChoose a country/region for shopping.
© 1996-2022, Amazon.com, Inc. or its affiliates