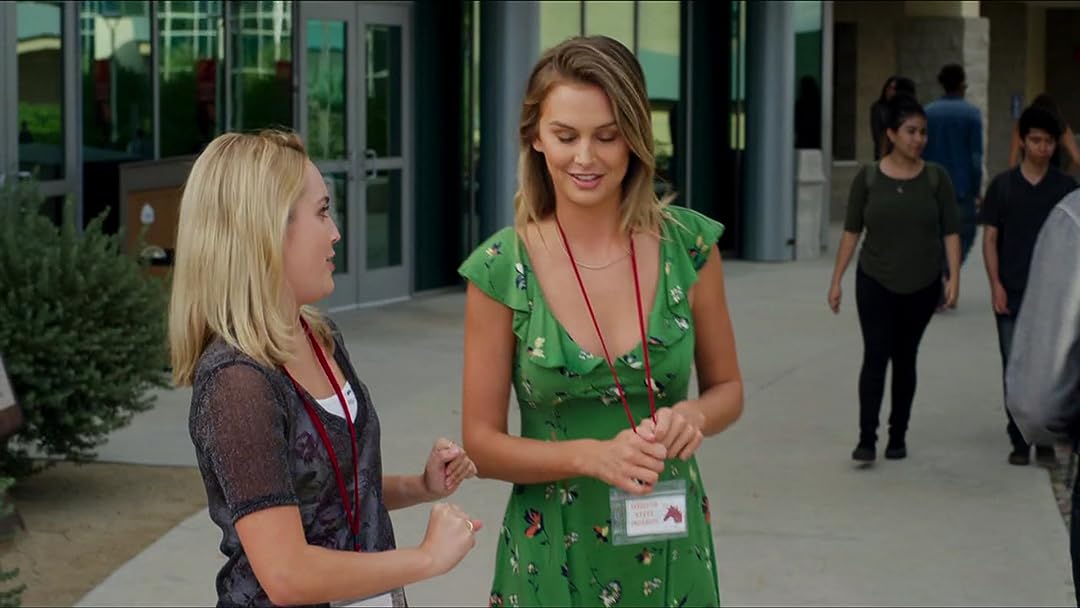 (135)
3.31 h 25 min2018R
While her cop father (Randy Couture) tries to stop the serial killer preying on her sorority sisters, new pledge Riley (Lala Kent) must not only endure cruel hazing rituals, but try to survive the demented killer.

Stephen O'BlenisReviewed in the United States on November 28, 2019
4.0 out of 5 stars
Horror Stalks The College Campus Once Again
Verified purchase
Ritualistic murders plague a college campus in The Row, a highly under-rated horror thriller. (3.3/10 on IMDB? Seriously?) The main point-of-view character for the movie is a first year student named Riley (Lala Kent), who's just arrived at the university with her best friend Becks (Mia Frampton). Upon their arrival the girls aren't anticipating having to contend with murder, instead being focused on fitting into college life and getting into the best parties. When a movie does this kind of thing on a college, usually they go one way or the other - sexy/fun on one hand, or disturbing/hazing-oriented/drugged out on the other hand. The Row attempts to straddle the line and do both, and gets (maybe surprisingly) quite high marks both ways. The hazing has to be part of the story, because when the murders start happening - girls killed and having limbs or other parts replaced with mannequin parts and made up to look like dolls - evidence starts to point to the killings being linked to a disturbing hazing ritual gone awry, which years ago left a girl dead. Riley's father (Randy Couture) happens to be on the local police force - admittedly, a convenient coincidence - and tries to get in on the case despite being suspended for a terrible accident at a drug raid a short time earlier. As the killings mount, investigators arrive at the conclusion that the killer is using the missing parts of the dead bodies to make his own doll of flesh.

More like a thriller earlier on, and more like a horror movie the further you go, The Row works well either way. I'm not going to claim it's an all-time masterpiece on a technical scale, but the production values and general filmmaking are noticeably higher than some of the other ultra-low profile movies similar to it. (The Row is so obscure that even I didn't know it existed until just a couple months ago, and I try to keep right on top of what new movies are coming out, especially horror movies). Additionally, every single female cast member is pretty amazing to look at. So if you're into movies like Sorority Row and Black Christmas, don't hesitate to give The Row a chance too; I think you'll like it. And by the way, don't forget to watch right till the end - there's a post-end credits scene that adds a new angle to the movie.

T. J. ClarkReviewed in the United States on December 27, 2020
1.0 out of 5 stars
Skip It
Verified purchase
I can appreciate a lot of different types of bad. I can do low budget. I can do cheesy. I can do campy. The Row was none of those. It was just straight up bad bad. An unengaging story, casting interchangeable pretty actors, and told badly with plot holes being the best thing about it. I think they realized what they were working with in post-production, and tried to fix it with some flashy editing, but that only made it worse.
2 people found this helpful

Charlotte J.Reviewed in the United States on November 5, 2018
1.0 out of 5 stars
Ignore the fake positive reviews. This movie is trash.
Verified purchase
I don't know why there are so many good reviews for this garbage. There is nothing of quality in this trainwreck of a movie. The acting is awful, like right out of highschool drama class awful, the cinematography is nonexistent, the plot is ridiculously predictable and it's like the movie was edited by a chimpanzee. The plot is very basic, sorority girls end up dead so the police investigate. This isn't fun or campy like slashers of the 80s this is horror if done by the MTV generation. I highly warn you to avoid this movie. Don't be like me and waste $20+ on a terrible, boring movie.
4 people found this helpful

Amber TerryReviewed in the United States on December 13, 2018
4.0 out of 5 stars
Good movie.
Verified purchase
Very good thriller movie!! Reminds u of the scream movies. The killer is defitnely a shocker!!!

KateReviewed in the United States on March 18, 2019
3.0 out of 5 stars
She did great. Good movie
Verified purchase
The only complaint it was to short they could have done so much more with storyline. Lela was Great.

Nicolas SuttonReviewed in the United States on December 11, 2018
3.0 out of 5 stars
Too fetch
Verified purchase
Like so fetch, too fetch for my blood. On a scale of 1-fetchilous, it was about a Paris Hilton
2 people found this helpful

maryReviewed in the United States on March 29, 2019
5.0 out of 5 stars
LaLa from vanderpump rules is why people watch this movie.
Verified purchase
LaLa is the only reason why this movie would be watched.
3 people found this helpful
See all reviews
Back to top
Get to Know Us
Make Money with Us
Amazon Payment Products
Let Us Help You
EnglishChoose a language for shopping. United StatesChoose a country/region for shopping.
© 1996-2022, Amazon.com, Inc. or its affiliates