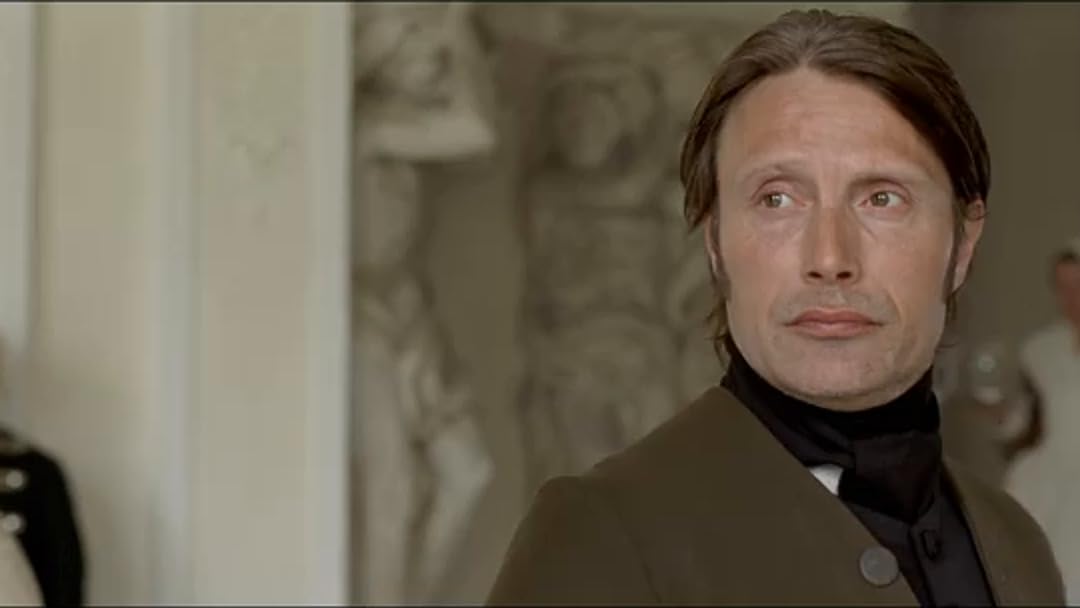 (1,744)7.52 h 17 min2012X-RayR
The true story of an ordinary man who wins a queen's heart and starts a revolution. Foreign language movie with subtitles

a readerReviewed in the United States on October 22, 2017
5.0 out of 5 stars
A quiet masterpiece - DO NOT overlook this film
Verified purchase
I saw this in the theater when my husband (who is a film scholar) was out-of-town and I was so impressed by it that I bought a copy, to try to convince him to watch it. For some reason, that endeavor was like pulling teeth, but when we finally watched it together a few nights ago, my husband had to admit that it fully lived up to everything I had said about it.

The film is based on a staggering series of events that had an explosive impact on Denmark, just as Europe was being transformed by the Enlightenment. The acting is truly exceptional... not only, as one would expect, from Mads Mikkelsen, but also by the two actors who play the king and queen... we were particularly amazed to learn in the extras that the actor who so masterfully plays the king is new to film acting! The writing and direction are superb.

When interviewed at the Berlin Film Festival, Mads Mikkelsen said it was his favorite of the films he has starred in... HIGHLY recommended!

Amazon CustomerReviewed in the United States on August 23, 2020
5.0 out of 5 stars
well done!
Verified purchase
I read ALLOT of historical non-fiction about royalty and have never read or heard this story before so my review is based purely on thoughts of the movie itself. EXCELLENT! the acting was GREAT and they picked the perfect people to play the parts they did. Very good actors/actresses ! I find it difficult at times to be truly engrossed in films with sub-titles yet they tend to be the only ones ( other than British royalty) that one can find on royalty of other countries and in this case I was blown away. There was a melancholy to the film but with the subject matter from the one telling the story it added to the film. Was very very impressed.
6 people found this helpful

D.F.Reviewed in the United States on April 21, 2020
5.0 out of 5 stars
Sad Hstorical Events Depicted Beautifully. "A" Plus Movie
Verified purchase
This was definitely not a boring movie. You must watch with English captions because the movie was made with actors speaking Dutch. True events according to the history books regarding this love affair. A beautiful princess marries a weirdo king who has an obsession with self pleasure, sleeping around, and he has the mentality of a child. The queen falls in love with the king's doctor, who was a real gentleman but stupid for sleeping with her. The ending of this movie was unpredictable and nail-biting. Sad historical events that was depicted beautifully.
6 people found this helpful

Linda Sue RichardsReviewed in the United States on September 2, 2016
5.0 out of 5 stars
A tragic and true story told beautifully!
Verified purchase
I've seen this movie three times because I love it so much. It is the tragic and true story of the young Queen Caroline Matilde of Denmark, her erratic and mentally unstable husband King Christian, and the German royal physician Johann Frederich Struensee. Power struggles within the court, a medieval power structure in Denmark that suppresses it's people, and two people who are enchanted by the spirit of the Enlightenment, and then, each other. The acting of Alicia Vikander and Mads Mikkelsen as the doomed lovers is heart-breaking. The costumes and sets are lucious. This story is part of Denmark's history, the cultural and political collision and two people caught in the crush of history. It fully deserved and won the Academy Award for Best Foreign Film.
24 people found this helpful

VIRGOINFJReviewed in the United States on March 28, 2021
5.0 out of 5 stars
Extraordinary Historical Film
Verified purchase
This was a long film, but worth the time it took for the story to unfold. Incredibly well acted--the chemistry between the two leading characters (Alicia Vikander and Mads Mikkelson) is amazing, even with the difference in their ages. The attention to detail throughout is outstanding, the direction is strong and as crazy as the King was--his child-like behavior made him both an object of ridicule and to be pitied. This is not an easy feat for an actor, but Mikkel Boe Folsgaard pulled it off. I was not familiar with this story about Denmark and I'm glad it wasn't short-changed by making the film shorter.
2 people found this helpful

LohengrinReviewed in the United States on May 13, 2021
4.0 out of 5 stars
Good, but predictable
Verified purchase
Perhaps the great reviews got me over-psyched for this movie. I thought it good, but not fabulous. This is probably the fifth Mad Mikkelsen movie I've seen. I enjoy his work enough.

The movie very much reminded me of the series "Ekaterina: The Rise of Catherine the Great" which I enjoyed on Amazon Prime. Both portray a mentally challenged monarch (Peter III of Russia in the series) and offer sumptuous sets. I might prefer the Ekaterina more for having more intrigue and drama, but it is difficult to compare a movie with a series.

NunnayrbznzReviewed in the United States on August 16, 2016
5.0 out of 5 stars
Excellent in every way
Verified purchase
You can recognize an excellent foreign language film when at the end you suddenly realize you had been reading subtitles! Anything that engaging is obviously a testament to the excellent acting, direction & editing. Had the film been too slow, the music inappropriate, or the story not reflected so well by movement, expression, and voiceless storytelling, the brain would have been taken away from the memorizing story and been reminded that I was reading subtitles rather than being told a fascinating story. I guess I was suddenly fluent in Danish! The nice thing about history is that it reminds us that lives never simply disappear, there is always a trace influencing the future. I always wish the dead could see the ultimate value of their lives. It was lucky that the real story was written and passed along so it could make such a direct impact. It was interesting to see that Denmark, always viewed as very progressive, had the same bleak systems in the beginning. Even though the US had a birth from revolution it still had the same sort of system relying on slavery, indentured servitude, and "marriage" until each of those systems were changed by different forms of rebellion, even the personal quiet ones. When I hear (read) people complain about subtitles, I do think there are some very bad subtitled movies, but it's because it just wasn't a good movie and the subtitling really underscored how bad it was.
6 people found this helpful

Cole CReviewed in the United States on August 25, 2015
5.0 out of 5 stars
The Peasants Are Revolting.
Verified purchase
Don't blow off this film just because of the lame title, turgid start and the fact that it's a costume drama.

Once it gets going there is just as much betrayal and intrigue as any season of Game of Thrones (only this is a true story, not a pastiche rip off of every myth in history). The acting is uniformly excellent, the love interest (AV) is REALLY good, better than the blonde dope with the chipmunk cheeks and the dragons who likes to take her clothes off.

MM is fantastic, and the guy who plays the King is great in a crucial role. The film wouldn't work without him being excellent.

Also admirable are the production design and overall palette of the film. A lot of grays and creams, not many bright colors. The music by Gabriel Yared and another guy is also very good. All in all a lot of production value for what must have been a modest budget.

Particularly good is the way the director contrasts the life of the nobility with the lives of the peasants. He doesn't beat you over the head with it, which is refreshing. It will help to have a least a passing knowledge of the contemporaneous French Revolution (which is the elephant in the room, of course). If you know who Voltaire, Robespierre etc are, and what happened to much of the nobility, you will be in good shape.

If you enjoy mad kings you might also enjoy "Ludwig" by Luchino Visconti. With out-of-this-world casting of Romy Schneider and Helmet Berger (disclaimer: running time is nearly 4 hours and it's hard to find) but worth it. Of course any film by Visconti is a treasure.
4 people found this helpful
See all reviews
Back to top
Get to Know Us
Make Money with Us
Amazon Payment Products
Let Us Help You
EnglishChoose a language for shopping. United StatesChoose a country/region for shopping.
© 1996-2021, Amazon.com, Inc. or its affiliates