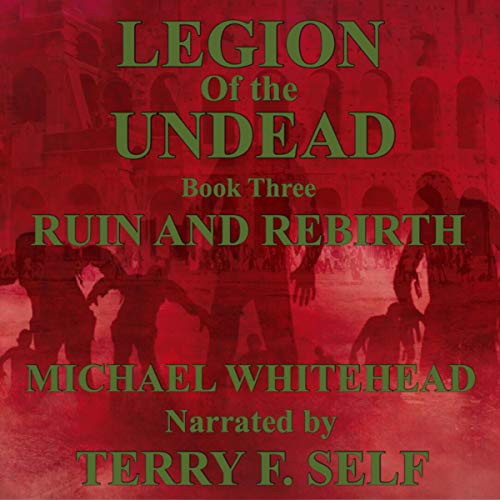 Ruin and Rebirth: Legion of the Undead, Book 3

Michael Whitehead (Author, Publisher), Terry F. Self (Narrator)
5.0 out of 5 stars 1 rating
See all formats and editions
Sorry, there was a problem loading this page. Try again.

Ruin and desolation have fallen on the Roman Empire.

The undead have destroyed everything in their path. The greatest city in the world in nothing more than a wasteland. Men gather in the furthest corners of the empire, preparing for their final stand. The last army of Rome, the last fighting force of mankind.

Across the empire, a group of desperate friends carry with them one last hope. They must travel to the heart of the undead. They must be willing to sacrifice. They must be ready to give everything they have in order to save Rome and each other.

Out of ruin there may be rebirth.

DabOfDarkness
5.0 out of 5 stars A riveting ending to great series!
Reviewed in the United States on September 24, 2018
Note: While this is Book 3 in the series, it works mostly OK as a stand alone. The series is worthy, so I recommend starting at Book 1 for entertainment value.

Lucia and the archer Vitas have made it this far and they aren’t giving up! These were my two favorite characters from Book 1 and it’s good to see they have survived the zombie plague to play important roles in Book 3. It’s been a few months since the end of Book 2, but our little band of heroes is on a nebulous quest. Lucia has gotten better and better with weapons and avoiding zombies. She pulls her own weight while also noting how much she’s stepped outside the typical Roman woman’s role in society. These are extraordinary circumstances and they require shields, weapons, and some common sense. The men in her group are all for it because this is a fight for humanity. No room for shrinking violets here!

Meanwhile, back in Rome proper, some few humans have managed to survive by scavenging for supplies and hiding from zombies. There are a few brave folks that ban together to rescue those that can be brought back to one central location. Garrick, a butcher, is a lead character in these scenes. He’s smart, careful, and becomes a major force in the fight to reclaim Rome.

Flavia and her husband do much to bring the survivors of Rome together. I really like Flavia because she’s competent, gets stuff done, and yet sticks to the societal boundaries of the time and location. She doesn’t get to pick up a weapon but she does use her wits. She shows bravery in the toughest moments and appreciates what others risk to keep her and others safe.

Back in Germania, Vitus and Lucia keep moving their band north. Regulus is at the heart of something, having visions of the source of the plague. Vedus (spelling?) has been showing Regulus a temple via these visions. So there’s this supernatural quality to the story and as it progresses, Regulus becomes more and more aware of what might await them. Lucia and Vitus do everything they can to get the weakening Regulus north.

The Roman Empire was huge and contained many cultures. This series and this book have nods to that. There’s a young Chinese lad and the Persian warrior Harkour. And the Spaniard (Gallus, if I recall correctly). I love that the Roman Empire isn’t white washed in this series.

The final conclusion to the tale is carried out on two fronts: the truth of Regulus’s visions and back in the City of Rome where frenzied zombies threaten to eradicate human life. It was only in the last moments that I realized what a toll this plague would take. It pulled on my heart strings, being both horrible and beautiful at once. The concept of sacrifice is well captured in these scenes. It’s a worthy ending to a worthy series. 5/5 stars.

The Narration: Terry Self is his usual outstanding. Every character was distinct and the ladies sounded like women. I especially appreciate how he kept Vitus and Vedus very clearly delineated from each other as it would be easy for a listener to mix up these names if the narration was sub-par. His true gift this time is working with all the emotions of the characters. They are seeing their society fall in short order and so much has already been lost. I also liked his various accents. The pacing was perfect and there were no technical issues with the recording. 5/5 stars.
Read more
Helpful
Report abuse
See all reviews
Back to top
Get to Know Us
Make Money with Us
Amazon Payment Products
Let Us Help You
EnglishChoose a language for shopping. United StatesChoose a country/region for shopping.
© 1996-2021, Amazon.com, Inc. or its affiliates