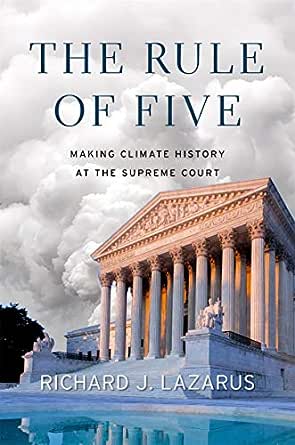 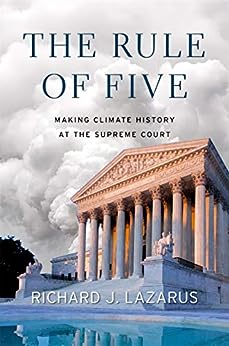 The Rule of Five: Making Climate History at the Supreme Court Kindle Edition

“The Rule of Five is the gripping story of the most important environmental law case ever decided by the US Supreme Court. Richard Lazarus’s compelling narrative is enlivened by colorful characters, a canny dissection of courtroom strategy, and a case where the stakes are, literally, as big as the world.”―Scott Turow, author of Presumed Innocent

“In the tradition of A Civil Action, this book makes a compelling story of the court fight that paved the way for regulating the emissions now overheating the planet. It offers a poignant reminder of how far we’ve come―and how far we still must go.”―Bill McKibben, author of The End of Nature

“Wonderful…The inside story of how this case came to be, how its lawyers struggled and fought over theories and roles, and how the late Justice John Paul Stevens patched together the five votes needed to secure a majority…Lazarus walks readers through all of the procedural steps and legal theories that surrounded this case, using lucid prose that is easy for nonlawyers to follow. The book is a master class in how the Supreme Court works and, more broadly, how major cases navigate through the legal system.”―Michael B. Gerrard, Science

“Gripping…Weaves the tale of how Mendelson’s petition led to the landmark decision, how he brought along the other environmental advocates despite bitter infighting, and how missteps by their opponents gave the lawsuit wings. Lazarus, who interviewed participants in the case, from lawyers to Supreme Court justices, writes like a novelist.”―Caroline Fredrickson, Washington Monthly

“In vivid detail, with every sentence clear to a nonlawyer, Lazarus traces the story of the case through eight years of ups and downs…A riveting story, beautifully told.”―Jessica T. Mathews, Foreign Affairs

“[A] masterpiece…Offers a behind-the-scenes look at every aspect of the case, from the Bush administration’s fierce opposition to the internecine conflicts among the petitioners to the razor-thin 5-4 victory.”―E

“The Rule of Five is the definitive inside account of one of the key court decisions of our time. It’s also more than that. Richard Lazarus makes vivid the culture of the Supreme Court and the sheer unlikeliness of history. There’s no better book if you want to understand the past, present, and future of environmental litigation.”―Elizabeth Kolbert, author of The Sixth Extinction

“A character-driven thriller about how climate change came to the fore of U.S. politics and legal action…An exciting, tension-filled analysis of an improbable environmental triumph and an influential federal ruling whose effects have rippled out to the other branches of government, the states, and the private sector ever since.”―Rachel Jagareski, Foreword Reviews

“The Rule of Five is a compelling read on a critical and timely topic. It mixes storytelling with a soup-to-nuts view of a pivotal case contested across all three branches of government. The focus on the six Carbon Dioxide Warriors adds to the richness of the story and demonstrates how the often-abstract nature of the law can actually be very personality-driven. Lazarus also does an excellent job illuminating the inner workings of the Supreme Court and of the second most important court in the land―the US Court of Appeals for the District of Columbia Circuit.”―Dan Reicher, former US Assistant Secretary of Energy

“As legal drama, The Rule of Five is a tour de force. It offers a look into the inner workings of the nation’s highest court, and a history of its most important environmental decision. With impressive research, including interviews with the key players, and succinct explanations of relevant law and Supreme Court practice, the narrative makes the story accessible to anyone interested in this case, the Court, and the future of the planet.”―Jonathan Z. Cannon, author of Environment in the Balance: The Green Movement and the Supreme Court --This text refers to the hardcover edition.