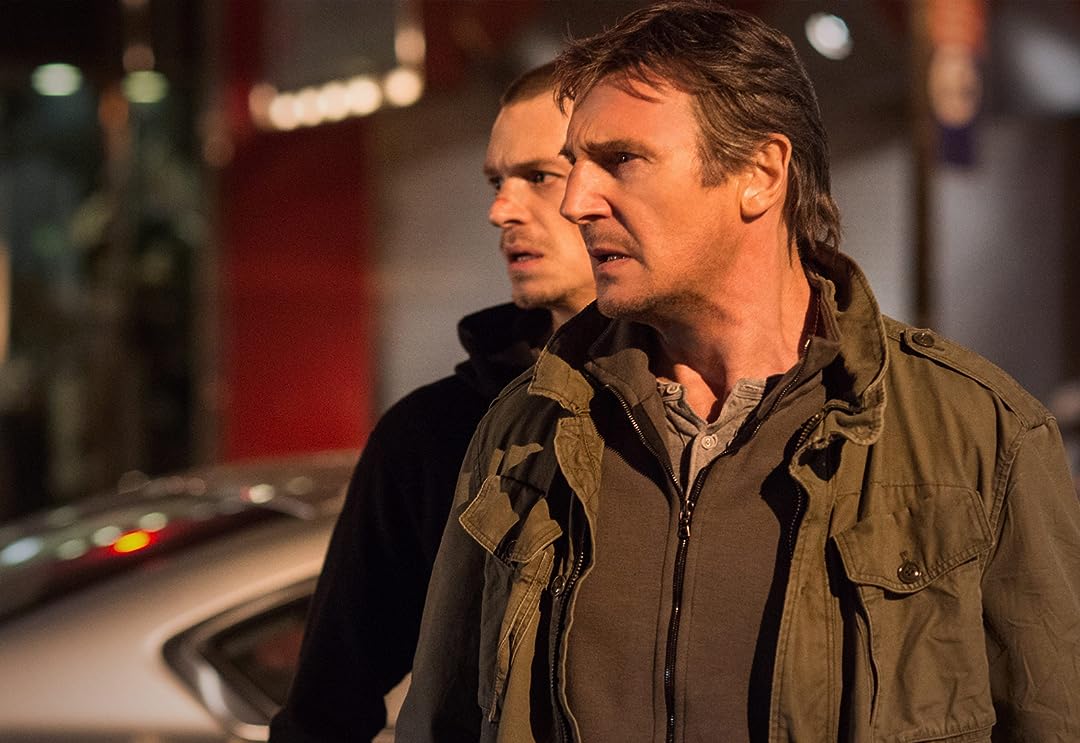 lasniteReviewed in the United States on June 13, 2017
3.0 out of 5 stars
It was ok. Better at home than in the theater
Verified purchase
It was okay. The father, Jimmy, is an drunken retired hitman for the mob. The son, Micheal, wants nothing to do with him, Thru circumstances of chance, Micheal witnesses the son (Danny) of his father's boss (Shawn) kill two people. Although Shawn tells his son, Danny to leave it alone, Danny tries to kill Micheal, but ends up being killed himself by Jimmy. Shawn then makes it his vow to kill both Micheal and Jimmy in retaliation. Jimmy tells Micheal that he only needs to follow his orders for one night and then they can go their separate ways again, Jimmy goes the night protecting Micheal thru a hail of bullets all over NYC.

It was an ok movie. The father/son interaction and not being able to forgive was the over arching premise. Although the action was good, the storyline didn't quite draw me in. The son's need to blame his father for everything that went wrong in his life seemed a little over the top. Also, would you really kill your best friend who has done so much for you even though you know it was your son's fault? Still the acting was spot on and the supporting roles by Common, Ed, and Vincent were excellent.

Lori BReviewed in the United States on May 7, 2019
3.0 out of 5 stars
Same old plot, with a great car chase.
Verified purchase
Liam Neeson is intense as usual.
Great cop/Liam car chase.
Typical bad guy with a heart plot,
So no real interest that way. Utube Neeson’s audition for the Santa role in the movie!

Liam Neeson’s movie “5 Minutes of Heaven” is really his best; a thought provoking and intense movie set in the mean streets of Dublin at the beginning. If you don’t know what “the troubles” in Ireland mean, its worth googling before watching the film..

rbmusicman/and/movie-fan'Reviewed in the United States on July 8, 2015
5.0 out of 5 stars
'IT ENDS TONIGHT !' - ('LIAM NEESON' ON FORM IN THIS THRILLER')
Verified purchase
'IT ENDS TONIGHT ! - 'LIAM NEESON' ON FORM IN THIS THRILLER'
Mobsters Hit-Man 'Jimmy Conlon' (Liam Neeson) now aged 55 and long-time friend of Mob-Boss 'Shawn Maguire'(Ed Harris)
was once known as the 'Gravedigger' ......but is now haunted by the past, he drinks too much, and has hit a low-ebb in life.....
His relationship with son 'Mike' (Joel Kinnaman) is non-existent.......
For 30 years NYPD Cop 'John Harding' (Vincent D'Onofrio) has been trying to nail 'Jimmy' but has always been one-step behind.
When 'Mike' witnesses 'Shawn's' out of control son 'Danny' (Boyd Holbrook) kill someone, 'Mike's' life is under threat, 'Jimmy'
wants to keep his estranged son safe, he'll need a clear head to do so, 'Mike' will not want his fathers help but as events turn
out, both 'Jimmy' and his son become a target, 'Shawn' wants to even the score, and tells 'Jimmy' so face to face.
When 'Mike' is taken into custody, 'Jimmy' knows things don't feel right, he has to spring his son.
The two now become hunted by both the police led by 'John Harding' and indeed 'Shawn' and his heavily armed hoods...
'Shawn' decides to hire the ruthless and efficient professional hit-man 'Andrew Price' (Common) confident that he won't stop
until he completes the task.
'Mike's' immediate priority is to ensure his wife and children are out of danger....
Now the chase is on, it's going to be a long night.
This is 'Liam Neeson' at the top of his game.......with car-chases, fire-fights, hand to hand and often brutal combat sequences....
...all coming together to make this a heart-pounding, edge of your seat action-packed roller-coaster ride.
The violence is often graphic and there is frequent use of colourful language...
Great Picture and Sound Quality.
Features -
* Includes two featurettes - 'Shoot All Night' and 'Liam Neeson' - Action All Night.
* Deleted Scenes.
5 people found this helpful

prisrobReviewed in the United States on June 16, 2015
4.0 out of 5 stars
Tense, Action Oriented Film
Verified purchase
'Run All Night' is a tough film with plenty of action. In fact much of the action will have you on the edge of your seat. Rooting for the good guys who may be the bad guys, it is all convoluted.

Liam Neeson, plays Jimmy Conlon, a has been mob enforcer. In fact so bad he has dreams of the people he killed. he worked for the toughest of the mob, Shawn Maguire, played by Ed Harris. Jimmy wakes up in a bar, and just starts drinking again. He now scrounges money from Shawn’s son Danny, played terrifically by Boyd Holbrook. Hence the tough guy is now a laughing stock. He had a family he never paid much attention to. His son, Mike, played by Joel Kinnaman. Kinnaman was the driving force detective in the series, 'The Killing'. He us living the straight life, working as a limo driver. He has a wife and two children.

So, here are the players. Danny has mixed with an Albanian mob to bring drugs into his father's business. Dad wants nothing to do with it and says no. Danny is in big trouble, and when the Albanian mob shows up that night, all Hell breaks loose. Mike is the chauffeur test drove the Albanians to Danny's office. He gets mixed up in the fireworks, and he and his father, Jimmy take off. The film centers around Shawn McGuire's hunt for both Mike and Jimmy, and the FBI looking for all of them. A very tense action oriented film, with tough guys, violence gore and grits. If this is your forte, than this film is for you.

S.A.S.Reviewed in the United States on January 29, 2021
5.0 out of 5 stars
Happy Customer!!!!
Verified purchase
I chose this movie because I love Liam Neeson and and Common. I was pleasantly surprised to see him in this type of role (quite the opposite of Taken 1,2....) and it was a stellar performance. As for Common this is the second time I have seen him as an assassin and I loved it. He held his own, an excellent performance as well. I was not disappointed.

Kenneth HarriganReviewed in the United States on June 24, 2015
3.0 out of 5 stars
Run All Night should Run Silent.
Verified purchase
Bias Alert: I am hooked on action movies so my opinion here maybe slightly slanted. I have been a big fan Liam Neeson since the first Taken film. But I was disappointed in this film which I missed in the theater. The dialog was HORRIBLE. Now that I have got that out of my system the action sequences were very good and there was plenty of them. The storyline was very good also, but the execution of that storyline was not. If this was a silent movie I would have enjoyed it so much more. The acting was very good and Oh by the way did I mention plenty of action, gun fights, car chases, hand to hand and foot chases. I will watch this film again but I will have my headphones on while listening to some of my favorite music.
No Excessive Violence, Minimal if any foul language, I'm trying to remember if there was one quick walk through a topless bar.

BJ FraserReviewed in the United States on June 21, 2015
2.0 out of 5 stars
Just Watch Road to Perdition Again
Verified purchase
If you've already seen Road to Perdition then you've already seen this movie. Seriously this is almost the same movie, except in modern-day New York instead of the early 30s Midwest. There's a hit man (Liam Neeson instead of Tom Hanks) for an Irish mob boss (Ed Harris instead of the late Paul Newman) and the hit man's son sees the mob boss's son kill someone and so the mob boss sends goons to kill the hit man's son so the hit man has to take on the whole mob (and his boss) to save his son. In this case the son is an adult, but still. The mob boss even hires an assassin (Common instead of Jude Law) whose face gets messed up and there's a final shootout at a house by a lake. It's like, jeez why'd I bother watching this when I already own Road to Perdition?
2 people found this helpful

Chuck NelsonReviewed in the United States on July 31, 2021
4.0 out of 5 stars
Typical Liam Neeson film
Verified purchase
As a big fan of Liam Neeson, I have 6 of his movies, this one follows in the same pattern. This one has the
added element of not only taking on the bad guys but also finding ways to save his son. This is the first one
where he dies in the end of the movie.
See all reviews
Back to top
Get to Know Us
Make Money with Us
Amazon Payment Products
Let Us Help You
EnglishChoose a language for shopping. United StatesChoose a country/region for shopping.
© 1996-2021, Amazon.com, Inc. or its affiliates