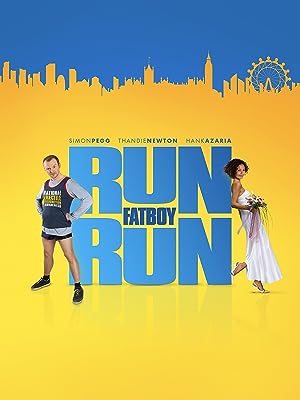 Amazon_CustomerReviewed in the United States on January 5, 2014
5.0 out of 5 stars
Awesome Underdog Story
Verified purchase
I had no clue who Simon Pegg was until I found this movie and have been a fan of his ever since. I actually got the movie because I am a Thandie Newton fan and had never seen her in a comedy. Mind you, her role is not comedic at all, but this story is so cute and all of the characters do a great job. I also discovered Dylan Moran (I hope I got the name right - he's Thandie's cousin in the movie). SO FUNNY!

The movie is about Pegg who stood up his girlfriend (Newton) at their wedding while she was pregnant with his baby. The story then fast forwards to 5 or 6 years later when they've moved on and made their arrangements to co-parent, etc... Newton has a "perfect in every way" boyfriend (played by Hank Azaria) who is getting serious with her, and Pegg wants to win her back by running in the London Marathon (because the boyfriend runs marathons). The story is funny, clean and has a great ending. It lags just a tad in the middle for me (because I am not a fan of sports at ALL (except basketball) and the whole running thing was a bit taxing), but not so much that I would turn it off. I thoroughly enjoyed the film.

BradyReviewed in the United States on December 29, 2015
4.0 out of 5 stars
Charming, relaxed, funny.
Verified purchase
This is a movie you watch on a less than perfect day, when your brain is fried from too much work/school, and you need something to cheer you up.

Its story is predictable yet charming and its characters are diverse and often times hilarious. You can't help but feel there were some missed opportunities, such as exploring the other characters more in depth, but in the end this movie hits just the right spot.

In the end, this film is clearly not Simon's best but I don't believe it's necessarily supposed to be. This is a simple, sweet, funny movie and it doesn't need to be anything more than that.

beatcallReviewed in the United States on August 15, 2019
5.0 out of 5 stars
Simon Pegg
Verified purchase
When I watched the movie Paul, about an Alien with Seth Rogan's voice, and how funny it was, I was hooked. I've started collecting Simon Pegg and Nick Frost movies.

Manuel AponteReviewed in the United States on July 9, 2012
4.0 out of 5 stars
Feel good comedy Simon Pegg style
Verified purchase
I'm a big Simon Pegg and David Schwimmer (Ross from friends directs this movie) fan, so have that in mind if you read this review. This is great fun, it is a heart warming movie that even though it falls within a lot of the rom com cliches will give you a great time watching it. Seeing Hank Azaria as a bad guy is great, his character in this movie is not as caricaturesque as some other antagonist he's portrayed before so you don't get as much "free laughs" from it. Simon Pegg's performance is just what we would expect from him and those who enjoy his movies will definitely will enjoy this one as well!

JohnReviewed in the United States on June 15, 2021
5.0 out of 5 stars
Best. Movie. Ever. Simon Pegg in short shorts! 😍
Verified purchase
Hilarious movie with the usually Simon Pegg humor with a heart warming story line. It’s one of my go tos and actually inspired me to run the marathon. Oh and you get to see Simon in real short shorts and it’s great

StandingWolfReviewed in the United States on May 14, 2017
5.0 out of 5 stars
Worth awatch.
Verified purchase
Honestly, yes, the plot is a worn one. It's "been done" tons of times before but sometimes, you find a version that's a bit more delightful than you'd expect. Pegg really brings a bit of humanity to the dramatic moments, but doesn't shirk the campy parts, of course. Worth a watch.

terpfan1980Reviewed in the United States on September 26, 2008
4.0 out of 5 stars
Remember when "charming" wasn't such a negative?
Verified purchase
First, a warning to fans of Shaun of the Dead or Hot Fuzz, the more popular of the Simon Pegg starred films: this isn't a film that would seemed to have come from the same team of film makers, that is despite the fact that Simon Pegg did help develop the story for this film. There are lines of humor and jokes in this film that hint at the playful spirit shown in those earlier films, but as a whole this movie is much more in the "charming" category where those films were done in a different manner entirely. Perhaps the difference is David Schwimmer's direction, perhaps it's the screen play, or perhaps Pegg was intentionally aiming for charming in an effort to widen his range and appeal, either way the result here is a film that fans of the earlier movies may be disappointed in.

If you can get past the idea that this film is going to be charming, rather than more satirical and crude, well, you find that the result isn't that bad. 5 star material, not so much for me, and really probably more in the 3.5 range overall, but I'm rounding up a bit as I happen to think charming isn't such a bad thing to be.

Simon Pegg plays Dennis, a man that ditched his pregnant girlfriend (Libby, played by Thande Newton) at the altar. Years later he finds himself working as a security guard that can't run more than a few blocks to try to catch the shoplifter that ripped off the shop we works at. Ah, the difference a few years, many cigarettes and not so healthy eating makes for.

Dennis is a not so dependable father to the son that Libby has been raising by herself, and meanwhile Libby has found another potential love interest (played by Hank Azaria) who seems to make Dennis all the more sad over the love he lost.

Eventually (not so far along really), Dennis decides that he'll run in the big marathon to impress Libby, not just because he wants to impress her, but because his competitor for Libby's interest is going to run in the event. Can a guy whose life is such a mess, not to mention the lack of being physically fit, actually run a marathon? That's what you'll be watching to find out. :-)

There are several crude jokes mixed into the film along the way, and several minutes of the same mixed into the outtakes that are included on the Blu-ray disc. Nothing that is that harsh, but those that are easily offended should consider themselves warned. A few instances of rough language also help get the film that rating it sports, so again if you are easily offended perhaps you're better off looking elsewhere.

Picture quality on the Blu-ray is nice. The soundtrack is enjoyable and the musical selections that are included fit nicely where they are placed. Give this romantic comedy a chance to charm you and you may find it more of a winner than you expected. Certainly worth a rental, not far from the buy it rating.
16 people found this helpful

W. WehrsReviewed in the United States on December 26, 2013
3.0 out of 5 stars
Not Simon Pegg's best, but still funny
Verified purchase
Plot summary: a middle-aged man-child who ran away from his wedding and avoided responsibilities all his life decides to prove that he can finish something - anything - to his former fiancee and their child.

Simon is good without Nick Frost, but a part of the Cornetto trilogy this is not. There are some funny bits and some heart to the film, but there was just nothing to qualify it as overly memorable. I chuckled, but didn't laugh out loud.

It's a good rental, but I don't know I'd buy the disc again.
See all reviews
Back to top
Get to Know Us
Make Money with Us
Amazon Payment Products
Let Us Help You
EnglishChoose a language for shopping. United StatesChoose a country/region for shopping.
© 1996-2022, Amazon.com, Inc. or its affiliates