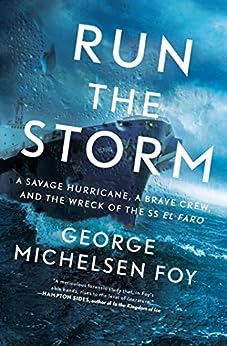 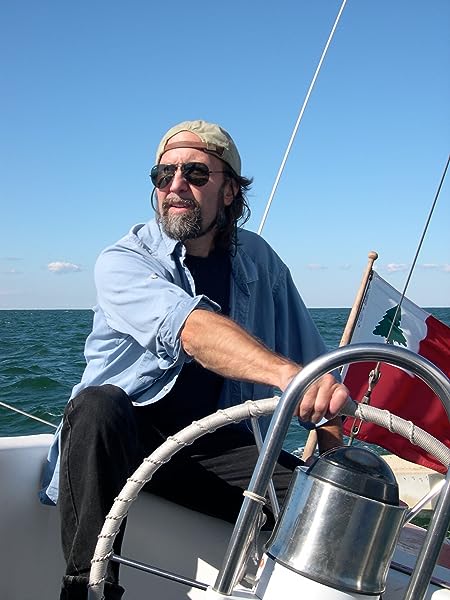 Run the Storm: A Savage Hurricane, a Brave Crew, and the Wreck of the SS El Faro Kindle Edition

by George Michelsen Foy (Author) Format: Kindle Edition
See all formats and editions
Sorry, there was a problem loading this page. Try again.
Read more Read less
Previous page
Next page
Due to its large file size, this book may take longer to download

George Michelsen Foy is the author of Run the Storm, Finding North: How Navigation Makes Us Human and Zero Decibels: The Quest for Absolute Silence, as well as twelve critically acclaimed novels. He was a recipient of a National Endowment of the Arts fellowship in fiction and his articles, reviews, and stories have been published by Rolling Stone, The Boston Globe, Harper's, The New York Times, and Men's Journal, among others. A former officer on British coastal freighters, he teaches creative writing at NYU, holds a US Coast Guard coastal captain’s license, and divides his time between Cape Cod and New York.

4.5 out of 5 stars
4.5 out of 5
158 global ratings
How are ratings calculated?
To calculate the overall star rating and percentage breakdown by star, we don’t use a simple average. Instead, our system considers things like how recent a review is and if the reviewer bought the item on Amazon. It also analyzes reviews to verify trustworthiness.

Kelly Burke
5.0 out of 5 stars historical weather analysis and an amazing amount of large vessel engineering data
Reviewed in the United States on June 1, 2018
Verified Purchase
Stories about maritime disasters, airline crashes and similar topics are rarely on my reading list. As a cruising sailor with a lifelong career as an airline pilot I’ve observed that authors and screenwriters rarely get it right in highly specialized and mostly closed fields where much of the reading public has almost no first-hand experience.

But George M.Foy set the hook with his previous title, “Finding North”, a very personal, well researched and thoroughly fascinating treatment of the navigational imperative that affects us all. Especially significant to me are his treatment of GPS and what he calls, “Cybernav”— automated navigation systems—how they affect us and at what cost?

With “Run The Storm” Foy reels me right in. This is anything but your ordinary disaster story. His impressively detailed research uncovers the chain of events that conspired as they usually do, to culminate in the finally unavoidable accident while rarely if ever interjecting the author into the story. He relies on factual data, interviews with credible sources, recorded data, historical weather analysis and an amazing amount of large vessel engineering data, yet the human side shines through in ways that range from ordinary to incredible. And it is, in the end, a story of the human spirit, and human failure on many levels. Coast Guard and National Transportation Safety Board investigational results give us their probable cause assessments, but Foy’s gradual un-layering of the details puts the reader in the terrifyingly omniscient position of knowing what’s coming and why, but being unable to shout through the pages to the crew, and the National Weather Service, and the shipping company, to Do Something To Break This Chain!

With this work, George M. Foy has also exposed a theme common wherever the conflict between corporate profit and safety clash; the pressure either expressed or implied to serve the bottom line first, the potential for inappropriate compromise and the price to be paid for lack of aggressive independent oversight, all themes that are compelling and common as waves on the sea. A great read by a first class author.

Joan Warner
5.0 out of 5 stars A PAGE-TURNER—WITHOUT AN OUNCE OF SENSATIONALISM
Reviewed in the United States on May 11, 2018
Verified Purchase
This is a work of integrity, compassion, and old-fashioned shoe-leather journalism. I didn't know much about commercial shipping or weather systems when I opened the book; now I not only know more, I care. How does George Michelsen Foy manage to make a container ship's pumps, holds, and consoles (not to mention the physics of how a tropical depression becomes a Category 4 hurricane) so fascinating? Here's how: He starts and ends with El Faro's people, the mates and hands and captain who uncomplainingly do their jobs until they can't do them any more.

Some "disaster book" authors tug at the reader's pity or conscience by resorting to inventions and assumptions. Foy doesn't play those tricks. When no one knows exactly what occurred at a particular moment, he reports that no one knows exactly what occurred. When he makes an informed guess, he says "maybe" and "perhaps." He acknowledges the agonizing void at the center of this story—the "why" that won't ever be answered. And still he keeps you racing through his book, because you HAVE to know what happens to El Faro and her people at the end.

Brett A. Fishwild
4.0 out of 5 stars Great summary, could use a little editing
Reviewed in the United States on November 13, 2018
Verified Purchase
I agree with several of the good and the not so good comments people have made about this book. First off, the book is definitely worth the cost and is a good read. Even though I had read through the final NTSB report when it came out and can say there is nothing new in Run the Storm, I still found it hard to put down. The timeline is laid out pretty well, the language is not overly technical, and there is not much bias in regards to conditions that lead up to the disaster. The use of voice transcripts from the recovered ships "black box" were very effective in building the narrative. As for the reason I give this book only 4 stars, the writing could have been edited better. The language at time gets overly flowery like the author bent WAY over backwards to attempt prose when a simple description would have sufficed, and there are sentences that contain several commas and semicolons (as in several of both in a single sentence) that run on for an entire paragraph. That seemed to get worse in the latter half of the book.

Glad I bought this book and I can say that last section describing when the ship went down, told almost entirely from the voice transcripts, was downright chilling.

E. R.
2.0 out of 5 stars Should be called "Run-On the Storm."
Reviewed in the United States on November 6, 2018
Verified Purchase
There is a lot of interesting information here - it's a massive pity that Foy apparently neither knows how to edit himself, nor employ someone qualified to do it for him. Misplaced commas and em dashes are legion, but the run-on sentences are - as far as I am concerned - an unforgivable sin; they transform reading from a transporting experience to a tiresome slog. And these aren't borderline suspects, here - we are talking single sentences that chew up an ENTIRE PARAGRAPH. I don't care how arresting the story is, or how loaded down a book is with interesting facts - bad writing is bad writing.
Read more
5 people found this helpful
Helpful
Report abuse
See all reviews