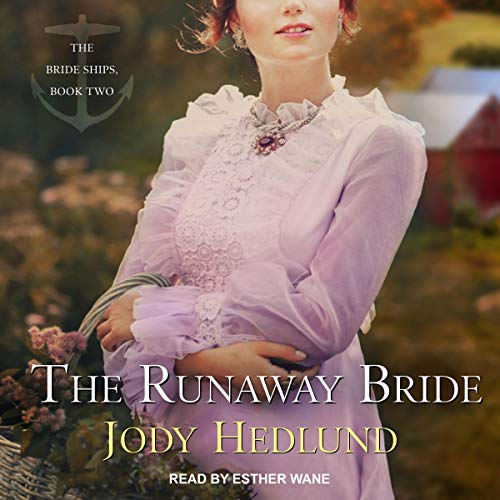 Wealthy Arabella Lawrence flees to British Columbia on a bride ship still wearing the scars of past mistakes. One of the few single women in the boomtown, she immediately has suitors, but she is determined not to find herself trapped again by a poor choice.

Vying for her hand are two very different men. Lieutenant Richard Drummond is a gentleman in the Navy and is held in high esteem. Peter Kelly is the town's baker and has worked hard to build a thriving business. He and Drummond not only compete for Arabella's affections, but clash over their views of how the natives should be treated in the midst of a smallpox outbreak.

As Arabella begins to overcome her fears, she discovers someone in dire need - a starving girl abandoned by her tribe. Intent on helping the girl, Arabella leans on Peter's advice and guidance. Will she have the wisdom to make the right decision or will seeking what's right cost both her and Peter everything?

Your audiobook is waiting!
Learn more about membership
List Price: $20.99
You Save: $2.62 (12%)
By completing your purchase, you agree to Audible’s Conditions Of Use
Sold and delivered by Audible, an Amazon company
Share

Stephanie McCallTop Contributor: Harry Potter
4.0 out of 5 stars She Ran to Save Her Life, But Forgot About Her Heart
Reviewed in the United States 🇺🇸 on March 28, 2020
Verified Purchase
Jody Hedlund returns with a new Bride Ships book, and takes us into the psyche of another type of woman who might have chosen a bride ship voyage--even if she didn't have to and arguably didn't need to. After meeting Arabella Lawrence in The Reluctant Bride, I looked forward to her story and found the results a pleasure to read.

Arabella does a great job presenting the POV of a wealthier bride without coming off snobby, shallow, or overly sheltered. She does admit she has classist attitudes, but here you can tell they are a product of her time and the pressures placed on women of her standing. Inside Arabella lurks a compassionate, hardworking, independent woman screaming to get out, and seeing her make that journey was probably the most gratifying part of the book.

As for hero Pete Kelly, he's not the match I'd have chosen for Arabella--funny, since she feels the same way for much of Runaway Bride. I enjoyed him though, because he is an atypical hero for this type of novel. That is, he's charming and he knows it. He flirts shamelessly and as Arabella says, can be downright arrogant and annoying. But unlike a lot of other annoying characters, Pete is also an endearing man with a good heart, one who manages to be realistically flawed without turning off readers. I did think he was way too forward and cavalier at various points, but he develops mature love for Arabella, and again, watching him grow is a high point.

I also enjoyed the secondary characters and underlying plot. Some people might argue it's not best to read about smallpox during a coronavirus pandemic, but I found some solace there. I enjoyed Haiel-Wat, Kwa-nis, and the other native characters, and was sobered and interested in how they may have been used as biological warfare weapons. Once again, Jody proves she can make historical issues current and find the universal themes within events that happened long ago. Arabella and Pete's emotional and spiritual development as people kept my interest much better than their romance at times.

There are some small-to-medium issues, but most are a matter of preference. For instance, I wanted to see more development of certain plot points, and more character development around those. For instance, Arabella comes to love cake baking, but it's rather sudden, and we rarely see her baking in a scene or nurturing creative ideas. I wanted to see how this woman learned to develop interests that weren't class-based, and how she would make them her own. The presence of Hayward, who by the way is a wonderful secondary character, helped some, but I needed more shading.

The same is true for Pete. His wild past is alluded to several times, but we're not given many specifics as to what caused the rift in his family, other than not wanting to take over Dad's bakehouse (which, okay, but families work through that sort of conflict every day and across centuries). I also felt like Pete's spiritual development was rushed, and frankly, I got kind of tired of seeing him get arrested.

Jody repeats some concepts again and again, especially within introspection (it's made *very* clear, for instance, that Arabella feels uncertain about marrying below her station--because she thinks about it over and over). She also shortchanges or demeans some characters (I hated the character of Blind Billy because he is quite literally defined by blindness and a grouchy personality--very one-note). Because of these issues, maybe Runaway Bride is more a 3.5. However, it's still a solid book and a good addition to the series.

Erin L
4.0 out of 5 stars Great historical romance!
Reviewed in the United States 🇺🇸 on July 20, 2020
Verified Purchase
4.5 stars for this second installment of the bride ships series. Fans of the first book will be glad to see Arabella Lawrence's story. We are introduced to her in the first story and enticed by the fact that she has a back-story worth knowing. If you haven't read the first book, this one can definitey stand alone. The main characters from book 1 are side characters in this book, but you don't need their story to understand and enjoy this one.

Once again, we follow the story of a woman on the bride ship coming from England to British Columbia (this time one of the wealthier class), and a man from the colony. Peter Kelley is the town baker and while he's not of the same class as Arabella, he is determined to win her heart. His competitive spirit is stoked when the gentleman of her class that seeks her affection is his nemesis. Their story was a fun one to follow. Pete reminded me a great deal of my husband in his jesting confidence and I appreciated that about his character. As with book 1, my minor complaints are that the thoughts and conversations regarding their differences in class (and I get it, it was a big deal) were fairly repetitive and their attraction was a bit more steamy than I liked (though that's a personal preference). Again, both very minor and combined only resulting in a half star from a 5 star review. All in all, an enjoyable read. I would recommend to fans of inspirational historical romance.
Read more
Helpful
Report abuse

I had an ebook copy of this book and I purchased the narration from Audible.

My thoughts about this book:

• A loved the story between a man and a woman from different classes. A wealthy woman that ran away from an arranged marriage and a kind baker.

• I was intrigued by the premise of a bride ship headed to Vancouver.

• I liked the relationship of caring that Peter and Arabella had with each other. I felt it throughout the book. They were people I easily became attached to.

• How much baggage do we carry with us in life? Do we unconsciously drag it along life's pathway hindering our forward progression? These were questions I pondered as I read this book. I like books that make me think.

• The descriptions of locations and emotions were well done and easy to visualize. I felt a part of the scenes.

• The author writes with an easy-to-follow prose that guides the reader without confusion.

• There were some religious overtones in this book, but it was a natural part of the characters' lives. This book was not preachy.

• This story was well edited.

• This was a clean read.

• The narrator did an exceptional job and brought this story to life.

I enjoyed this book very much and I highly recommend it. It is a unique romance and I think you'll enjoy it. I plan to read more books by this author.
Read more
3 people found this helpful
Helpful
Report abuse

Betsy
5.0 out of 5 stars Great Series!
Reviewed in the United States 🇺🇸 on January 2, 2022
Verified Purchase
This series has given me a fascinating look into the Bride Ships that traveled from England to British Columbia in the 19th century. Book Two focuses on an upper class woman who boarded the Bride Ships to avoid an arranged marriage. The romantic tension between the hero, Pete, and heroine, Arabella, was palpable while the brewing and ongoing conflict between Pete and a naval officer regarding the indigenous peoples and Arabella added much drama to the story. While part of a series, each book can stand on its own and I have read the first three out of order while fully enjoying each one.
I listened to this via audiobook and couldn’t wait to get back to it again. The story and narration were excellent!
Read more
Helpful
Report abuse
See all reviews

ginette
5.0 out of 5 stars Finding strength and faith
Reviewed in Canada 🇨🇦 on January 26, 2021
Verified Purchase
The story of a woman who had suffered much physically and emotionally. She finds courage and strength as she faces new challenges. She finds faith in God and the love of her life.
Read more
Report abuse
See all reviews