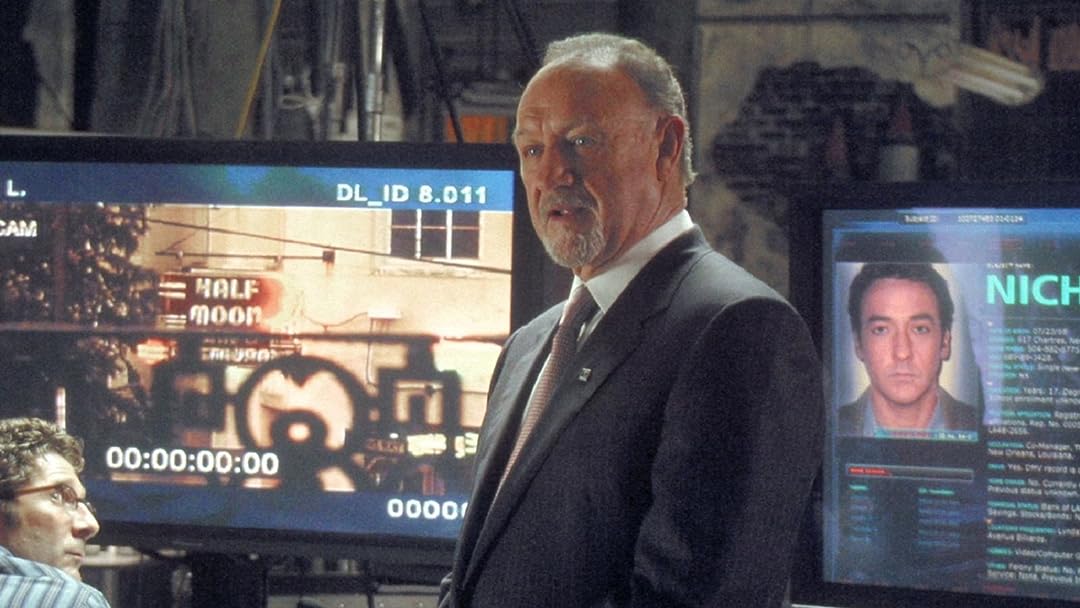 Commie CrusherReviewed in the United States on October 14, 2021
1.0 out of 5 stars
Further evidence that Communists run Hollywood.
Verified purchase
The founding fathers didn't just come from a hunting trip or a sports shooting competition when they included the 2nd Amendment in the Bill of RIGHTS.

It was provided so that We The People could put down any future tyrant or rogue regime like the one we have now, who thinks the power belongs to the government.

What do you think the potential danger might be if only the government had all the guns?

What could possibly go wrong?... I don't know... Ask the victims of the former Soviet Union or Hitler's Germany...

Good guys with guns can stop a bad guy with a gun.

Hint... Bad guys don't obey gun laws... And they view buildings and schools that have guns prohibited signs posted on their doors and windows as target rich environments.

Butterflymom54Reviewed in the United States on July 17, 2018
5.0 out of 5 stars
A wakeup call to arms, justice served!
Verified purchase
I love all of the actors in this movie. They all did a great job with the script and the story is stellar. I sincerely hope and pray that everyone who views this movie will watch with an open mind and really see what needs to be addressed here. Yes Americans have been given the legal right to bear arms! But to protect their families, homes and businesses and the borders of our country. That right does not mean to arm criminals, drug dealers, and the mentally insane. We have got to step up as citizens of this country and write new laws that hold the gun companies accountable for poor decisions. I would not put a firecracker in my small child's hand because that child is immature and not yet able to understand the seriousness of that firecracker. I believe parents need to be held accountable for their kids getting a firecracker and using it to kill, maim and ruin lives. I believe the law should never be able to take away guns but have better laws in place as to how these guns are distributed and used. Our law enforcement, drug agencies, schools and military should have firearms that can face a large number of attackers. Home owners only need firearms that protect. Hunters can use a certain type too although we now live in a time where men can get meat from the grocery store and the butcher. Again I am not suggesting firearms get taken away from them either. It is not the maker or the distributer that concerns me but the seller. I thought the entire story was a good portrayal of an effort to hold those accountable, accountable. Enjoy!!
10 people found this helpful

Stella CarrierReviewed in the United States on July 5, 2019
5.0 out of 5 stars
Controversial Legal Debate/Jury Film
Verified purchase
I admit that watching this film Runaway Jury piqued my interest to watch to see how others might see potential jury events even if fictional influenced by some time especially less than 4 weeks ago when I found out that I was selected to potentially be considered for jury duty within the next 3 days. I had also been selected for jury duty in both 2013 and 2016 and I am understanding that it is my duty as an American born citizen to do jury duty. I admit that I have yet to be on jury duty for the second day after being selected and I was curious to see how it is portrayed for those selected/chosen to do their second day Hollywood style. Of course, even I understand that jury duty in the way it is portrayed in this film is completely different in real life. However, it was fascinating to see the characters of juror Nick Easter (John Cusack) and Marlee (Rachel Weisz) act completely different from what is initially expected in the film of trial that involves prominent lawyers Rankin Fitch (Gene Hackman), Lawrence Greene (Jeremy Priven), Wendell Rohr (Dustin Hoffman) and judge Frederick Harkin (Bruce McGill) and how they handle a trial involving a workplace shooting. Of course more actors and actresses are featured in this film and this film plays with the controversial debate of gun companies and workplace shootings. I intuitively and logically understand that some of the most popular, well liked, andor highly regarded people take a public stand right out the gate on how they feel about certain gun control issues even as they pertain to workplace shootings. However, I admit that the reason why I am tip-toeing around publicly taking a side on if gun companies/businesses are to be held responsible in this online amazon review is because I need to give myself more time to research both sides of the debate in order to more intelligently/wisely make a more informed decision (including looking up more research before I even secretly take a side pertaining to gun control involving a tragic workplace incident in Virginia Beach Virginia less than 2 months ago at the time of this July 2019 writing that was temporarily covered all over national news outlets).
5 people found this helpful

Amazon CustomerReviewed in the United States on September 17, 2021
1.0 out of 5 stars
Not for the sophisticated audience
Verified purchase
Hollywoodie with its obvious script. Entire premise purports to be dramatically real but doesn't feel at all like anything that could happen. Pretty ridiculous actually. If I was 20 years old again, it would probably have made me think, "I'm watching an intelligent movie." But at 55, it seems entirely trite and so unrealistic that it put me to sleep. Best part is Gene Hackman and Dustin Hoffman, just to see them, not that even they could save this film.
3 people found this helpful

mathwonkReviewed in the United States on November 20, 2021
3.0 out of 5 stars
excellent movie, poor quality dvd
Verified purchase
This is my favorite movie based on a John Grisham book. The acting, directing and writing are all fine. This particular dvd however, although from a good name company: 20th century fox regency films, was hardly worth watching. The color was washed out and dull, almost like watching a Ted Turner colorized movie that had formerly been black and white. It was disappointing and took away from the pleasure so much that I will not watch this dvd again. Low price, but low quality as well. I do not know what to do about this. I.e. how do you choose a good one when you have to see it to know it is bad? With a good quality dvd, this movie is worth 5 stars; the 3 stars are for the quality of visual reproduction on this dvd.

joel wingReviewed in the United States on August 5, 2021
3.0 out of 5 stars
Seems more and more contrives the more times I see it
Verified purchase
This movie is about jury tampering and gun violence. A wife is suing a gun company over the shooting death of her husband. There are three different parties attempting to sway the jury their way. The first time I saw it I liked this movie but the more times I’ve seen it since it comes off more and more contrived. Yes it’s got a touching ending and the back and forth is interesting but the basic premise that these people can manipulate the jurors comes off as a gimmick to get you interested in the concluding message.
One person found this helpful

teols2016Reviewed in the United States on June 21, 2014
5.0 out of 5 stars
A Great Adaptation...
Verified purchase
While a number of important things were changed from the John Grisham novel this was based on (including the removal of the word "The" from the title), this film retained the spirit of its source material and was better for it. After her husband is murdered by a workplace shooter who then killed himself, she resolves to sue the gun manufacturer who made the murder weapon. She is represented by Wendell Rohr, played by Dustin Hoffman, an idealistic attorney who desires to finally hold the gun makers accountable for what their products are used for. Unbeknownst to them, the defense has retained Rankin Fitch, played by Gene Hackman, a man with a knack for profiling people who uses his talents to help select juries and, more importantly, manipulate the selected jury to vote in his clients' favor. In the middle of this is Nicholas Easter, played by John Cusack, a young man working at a videogame arcade who is summoned for jury duty and, after being a wise guy towards the judge, is selected to sit on the jury of the gun case. But it soon becomes apparent, to the viewer at least, that good old Nick Easter is up to something. And then there's the fact that Rankin Fitch is suddenly receiving calls from a mysterious woman called Marlee, played by Rachel Weisz, who knows all about his illegal activities and intends to outdo him. This was a great adaptation with an all-star cast. I especially enjoyed the confrontation between Gene Hackman and Dustin Hoffman...this was apparently their first scene together ever after they'd already been good friends for over forty years. Speaking of Dustin Hoffman, his character Wendell Rohr is more ethical in the movie than the book but he is thankfully not prissy...I credit that to the actor. I liked this movie very much and I don't care that the subject of the lawsuit in the center of the plot was guns instead of cigarettes as was the case in the book. The ending was a bit corny and too perfect, but I'll let that go. Enjoy.
15 people found this helpful

John JonesReviewed in the United States on January 15, 2021
5.0 out of 5 stars
Letting a jury make its own decision without outside persuasion and manipulation
Verified purchase
The premise of the movie is simple. An unrealistic covert group works to protect the interest of a large corporate entity by manipulating the jury pool, and jurors to reach a favorable outcome financially.

It is entirely unrealistic that any group could have such accurate and pervasive methods to 'conjure' a jury verdict in a landmark case, but it does tantalize the imagination.

I won't say any more to muddy the waters and spoil the outcome, but it's a fun ride, and if a conspiracy theory is a genre that you enjoy, then you will have a hell of a fun time with this flick.
One person found this helpful
See all reviews
Back to top
Get to Know Us
Make Money with Us
Amazon Payment Products
Let Us Help You
EnglishChoose a language for shopping. United StatesChoose a country/region for shopping.
© 1996-2022, Amazon.com, Inc. or its affiliates