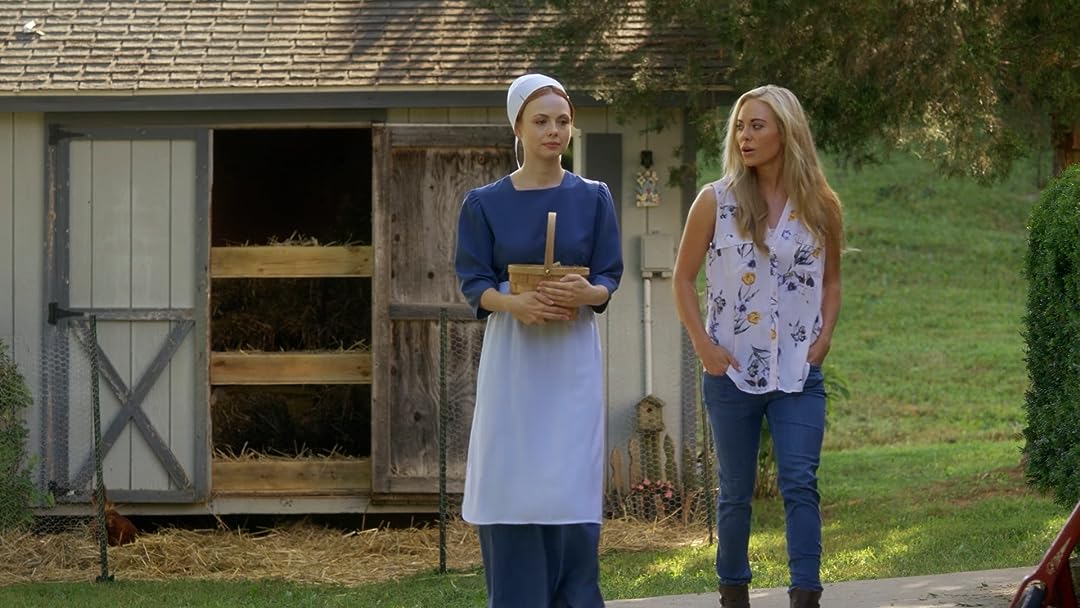 (251)
6.21 h 34 min2018X-RayPG
A reality TV star leaves Hollywood and finds herself in Amish country where she must decide between staying in her newfound reality or returning to her old one.

Kindle CustomerReviewed in the United States on June 12, 2020
3.0 out of 5 stars
Not as good as I'd hoped
Verified purchase
It started out cute, although the heroine's brunette wig is atrociously bad. Like, somebody should publicly apologize for it. But the acting was fairly good and Trevor Donovan is pretty enjoyable in everything he's in, but this is a movie that just sort of dropped everything important along the way and had a dumb resolution. Storylines like the inn keeper being forced to give up her inn and marry the bishop's son--what happened with that? Did she do it? Why wasn't that storyline resolved? I thought the chemistry between the leads was okay and I would have liked to have seen more done with the heroine's cooking skills since it was brought up so often. Not one I would watch again.
23 people found this helpful

SarahReviewed in the United States on August 7, 2020
1.0 out of 5 stars
A "Sarah"ble Disappointment
Verified purchase
Calling this a "movie" is a loose interpretation of the term, at best. These characters can take their Forever 21 clearance bin outfits all the way back to acting school where they belong. I have seen better wigs in the dumpster behind my local Party City. Even the bland malevolence of the off-brand Hemsworth brother love interest was not enough to save this train wreck. Unfortunately, much like a train wreck, I could not take my eyes off it. In this the year 2020, I would like to take a minute to ask for #justiceforSarah. She was done dirty and there are no two ways about it. All the supporting characters had worse ends than the aforementioned garbage wig. Also, as a personal note, I was sort of hoping for more Amish people. Just me? The overt religious overtones make me think the creators of this movie were on the right track, but fell short of their final destination. In brief: y'all need Jesus.
17 people found this helpful

Jacqueline StigmanReviewed in the United States on January 21, 2020
4.0 out of 5 stars
3.5 Stars. So called Entertainment Biz meets the Amish world
Verified purchase
I enjoyed the movie. Some rather large issues that could have been dealt with more deeply. Patriarchal Amish "Bishop" & his power over women who are Amish. Same power issue with the woman actress caught up in the preditory tinsel clutches of LA. Love conquering all when life is simplified so one can see what is truly important. Could have been much better. But the Amish woman's acting stood out. Because of her acting and also bec her character had more depth. So I was disappointed that her story was not completed. Her issues not addressed or fixed. That was a big fail. Still 4 stars Because I did enjoy the movie.
12 people found this helpful

RoxyReviewed in the United States on April 1, 2019
2.0 out of 5 stars
Seriously Yikes - Spoilers In This Review
Verified purchase
The first few minutes in and the story is completely implausible. The female lead is wearing a $10 wig that looks terrible and is totally out of style even back in the 70s when feathered hair was a thing. The male lead long hair makes him look like a 70s throwback. They are a cute couple but the grooming and wigs guarantees they could never be reality show stars, due to the clear inferiority of the wardrobe and the hair on both leads.
When the lead actress removes the wig, her hair is perfect and would have been easily believable with her original look. Also, what the heck is going on with the audio and Tatum O’Neals voice? It’s really bad.
The scene where the lead actress drives off the road is totally nuts. No woman would ignore car trouble, toss her phone out the window and then run off the road like that when traveling alone to parts unknown. It’s clearly another audio error that was added in during post where her engine is making funky noises. No one would ignore it since they were loud enough to be heard over the radio, no matter how upset you are at what you are hearing.

AndrewReviewed in the United States on September 1, 2019
4.0 out of 5 stars
Cute, Predictable Story for an Easy Movie Night
Verified purchase
Annie starts as a popular actress on a TV show, but runs away from it all following plot shakeups and learning the male lead didn't actually care about her. She ends up hiding out in an Amish community after driving her car into a ditch. She meets a guy, the actor from the TV shows finds her and yada yada yada. Nothing unpredictable at all about this movie. My complaint is there were a couple of subplots that were never resolved. Issues surrounding the Inn and the grumpy old Amish man were forgotten about by the end. Overall, not a bad watch. Provides some beautiful scenery as well.
11 people found this helpful

NMFLReviewed in the United States on October 22, 2018
5.0 out of 5 stars
Lasting impression
Verified purchase
I loved this film. I couldn’t stop thinking about it even days later. It was emotional and heartfelt, had great actors playing compelling characters, and you wanted them to come out on top. The standouts were Jay K. Johnson as Gabe, and Jace Delafosse as Tevin. The relationship that developed between these two strangers who, on the surface, should have nothing in common, was honest and palpable. Scott Sandsberry did an amazing job of creating multifaceted characters with depth and back-stories that made me feel like I knew them really well. I enjoyed the story and performances so much that I plan to watch again.
9 people found this helpful

Vance R. Purtell Sr.Reviewed in the United States on October 19, 2019
4.0 out of 5 stars
Those eyebrows though...
Verified purchase
Cute, clean movie which is rare to find these days. I agree with the comments about the wig being fake which is easy to overlook. However once you see the terrrrrrrrrribly uneven, awkward, asymmetrical eyebrows in a few scenes, you cannot UN-see it. Overall, sweet story with a 'meh' ending - while we see the resolution of one main character, we get no resolution on the Amish character, Sarah. Worth a one-time watch but doesn't make the top 20.
8 people found this helpful

Amazon CustomerReviewed in the United States on January 20, 2021
2.0 out of 5 stars
Really bad
Verified purchase
I had to watch all the way to the end, like a train wreck. I gave it 1 star but now I'm changing it to 2 because it's crossed over from bad to worse and back to entertaining again just to see how bad it is.

Everyone has already mentioned the wig. I usually don't notice that kind of thing, but I noticed. Bad green screen during the car scenes. So bad it was distracting. The eyebrows that you can't unsee.

The Amish: there's just 2 Amish characters? Very weird. And Sarah, the Amish girl, apparently won't speak using contractions? I googled it, and that's not a thing. Super awkward dialogue. I feel like they did a real disservice to Amish people and just used their religion to prove how "middle of nowhere" the character had gone. In one scene the Amish girl has ridden in a car to buy groceries (questionable) and among the (only 2 bags of) groceries is a loaf of bread. Really?

In one scene, she turns the nice guy down for a dinner date and tells him that she isn't looking to date right now. A couple scenes later, the SAME DAY, she accepts the hunky guy's offer for dinner, and that's perfectly fine. And she has a glass of wine at the early dinner which is not a date.

Super predictable plot, bad script writing, bad acting. Would give it a C+ if it had been an assignment for a high school theater student.