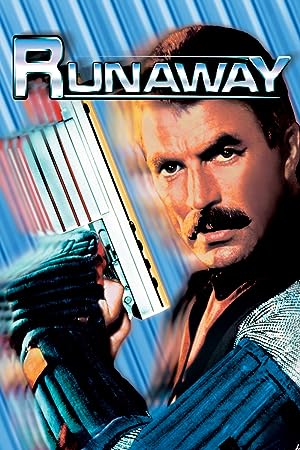 Sheri N.Reviewed in the United States on July 13, 2019
4.0 out of 5 stars
Fun 80's Movie
Verified purchase
When I was a kid, I wasn't allowed to watch this because of the violence. Now that I'm an adult (depending on who you ask), I rediscovered this little gem. I've always liked Tom Selleck, and there was a good reason he was in demand in the 80's. Some people can't get past his Magnum P.I. days, but that's only because they don't know/ care about his long list of successful movies like Quigley Down Under, 3 Men and a Baby, and Mr. Baseball.

There were obviously some parts of the movie that haven't aged well; it was visionary, not magic. They were working with the tools of the day to tell a story. Admittedly when the robots attacked, there were a few moments where I didn't have the reaction they were going for. However, if you can look past the shortcomings it's a good show.

The thing is, it predicted the problems many in IT security have only just now started getting headaches about. Ask one, if you happen to know someone in that industry, about security for IoT and what a nightmare that is. Everyone and their mother has a device on them that is open to hacking, which presents a unique problem for people charged with protection in that area.

If there was ever a movie that I would agree to having a reboot/ remake of, it would be this movie.

HoppyRooReviewed in the United States on October 27, 2020
3.0 out of 5 stars
So much good with so much bad
Verified purchase
For our younger audiences, this movie came out WAY WAY before anyone had cell phones, drones, even remotely AI robots, etc... it stole a lot of these ideas from other sources, and there are better movies ( predating this one ) that do it better...

So, ignoring all that... this is a fun little action flick that's more than 35+ years old... AND, I've seen the plot from THIS movie stolen by a TON of more recent movies ( in more ways than one )... it's got crazy shot-em-up scenes where the bad guy "might" have guidance controlled bullets... trust in robots, no wait DON'T trust in robots! And, of course, it's got all sorts of crazy 80's hair and cars... which I hear are making a comeback... lol...

Good? - Hey, we can relate to the main characters... We get scared when they get scared... type of thing... fast pasted enough to easily keep my attention...

Bad? - Some criminal gunned down 2 cops and they leave it to Magnum PI ( the robot detective ) to solve the case? Good gawd, the entire police force would be swarming... so check your logic and be-livability at the window and just have fun...

3 stars from me...
7 people found this helpful

T. PorterReviewed in the United States on July 10, 2019
1.0 out of 5 stars
Parents- heads up!
Verified purchase
I decided to try this movie out, figuring it wouldn't be too bad because it's from the 80's and rated PG-13. Well, the shock came when a full on view topless woman walks around looking for who knows what, hopefully a bra or a shirt. This was surprising and I didn't expect it, so I figured I would let all parents know. I didn't finish it because I was irritated about that and to be honest, it was kind of boring.
10 people found this helpful

MBA, SETReviewed in the United States on September 16, 2018
2.0 out of 5 stars
Tom Selleck is a Horrible Actor Without a Ferrari and Hawaii Propping Him Up
Verified purchase
The story sucked too. The son was the only good acting in this movie, but not enough to make Selleck look good without him driving a Ferrari in Hawaii.
In acting, Selleck can finally do one thing pretty well, now finally at age 70+ after decades of practice. He purses his lips, scrunching up the bottom of his face in a scowl. You see him attempt that here with poor success. Finally, in Blue Bloods, he is good at that, but grossly over uses this one acting expression he can do, in Blue Bloods. Maybe he isn't acting when he does it. At his age now, it could be pain from hemorrhoids from forcing his big body into those sparsely padded seats, riding in that Ferrari in Magnum P.I.
And the robots... in 1984 the spiders were pretty neat herein. The other robots in the movie were boxes with an arm and lights, yet they supposedly could do most everything humans could do. Incongruent to all the other robots, were the driver robots. They looked like human forms- why didn't other robots look like that? Because the driver was a mannequin that just sat there.
One thing in the movie was prophetic. The "bullets with your name on it."
6 people found this helpful

Francis Booth LynchReviewed in the United States on March 4, 2021
2.0 out of 5 stars
Fun to watch but fairly pointless
Verified purchase
Movie 4 of 1984 and 114 overall in my journey through films of my lifetime.

Story time: so as you can tell for being a pretty big film fan I have not seen very many hit movies. My dad was single and worked third shift, my grandmother worked during the day and we didn't have a lot of money. I was typically alone and when we did get time together my dad didn't value time in the movie theater. He would have much rather hung out on his Bayliner boat with me and a friend or two. How did he get the money for a boat? Actually the boat was one of the reasons beyond many others why we had so little money. However 1984 saw two trips to the theater (if you are from Louisville, KY it was the famous one on Bardstown Rd that serviced most of the city for decades). The first was on a Saturday night, on a whim, after boating all day my dad took my friend and I to see "Indiana Jones and the Temple of Doom." Another night, not long later we just went blindly to the theater and hoped to get lucky. We narrowed our choices to two films based on the movie posters but neither looked all that appealing. There was no turning back because I had no idea the next time I'd get a chance to see a movie. One choice was "Dune." The other choice was "Runaway." I remember the poster had Tom Selleck hiding with a gun around the corner from a mechanical spider. We chose "Dune." Today I'm a pretty big Lynch fan but at the time I was pretty bored. I always wondered if I would have liked "Runaway" more. Well I'll put my cards on the table now and confidently say only an hour into the movie and 37 years later that I would have most certainly have liked "Runaway" more! Today? Not so much.

Some may try to convince you that the technology in "Runaway" was way ahead of its time and predictive in nature. This, however, is flatly untrue. Just look at "GI Joe" or "Star Wars" figures and their sundry accessories for evidence. Kids have an active imagination and I can't think of a technology in this movie that we hadn't imagined and fit into functionality in our play sessions. What "Runaway" did do was realize the vision of this tech and tried, badly, to show it normalized in a future setting. There is one tech that I specifically came up with as a kid but thought it was a bad idea even for playing with action figures. That idea: a seeking bullet. Heat seeking missiles made sense but what would a smart bullet seek? I recall several times, at least two, where I thought about it and thought it didn't make sense so rejected it. Why was this really stupid idea good enough for "Runaway?" If the movie had answered my question then I'd at least have respect for it but of course it didn't. This was not the worst part of "Runaway" though. What about the fact that the mechanical spiders are "loaded with acid?" That reveal was definitely worse but did get quite a grin out of me. Unfortunately this was not the lowest point for the picture. The low point had to be the pointless inclusion of psychics in the film. Why, just - why? It wasn't even necessary to cover any plot holes as far as I could tell. Gene Simmons was comedically bad. He had a good look for the role but the director relied too heavily on this and it ended up being funny to see Simmons stare at the camera trying to look scary.

On the bright side pacing was not a problem. Tom Selleck was compelling to watch as always. The best part was the unintentional humor. While it wouldn't make the producers happy or made the experience better for me.

EloReviewed in the United States on August 21, 2018
4.0 out of 5 stars
Great Sci-Fi Flick!
Verified purchase
This is one of the '80s movies that established my love for science fiction. Younger audiences should keep in mind that the film was made in 1984. We didn't have drones with cameras, AI in our houses, retinal security, etc., so it was all believably futuristic back then. So much of this science fiction movie has become science fact!
Also - Gene Simmons!
17 people found this helpful

Bob EvansReviewed in the United States on June 24, 2021
5.0 out of 5 stars
Sci Fi romp thats Fun and Oddly Prophetic
Verified purchase
I really enjoyed this movie. The writers weren't too far off on a lot of their predictions of the future. Tom Selleck and Cynthia Rhodes are very watchable and have great chemistry. Gene Simmons does his part as an able bad guy. It's a good watch, high budget camp but it's pretty well done. For me it clicked.

One of the interesting things about most sci fi movies set in the near future is most fail to predict the internet or how information tech, information sharing and interconnection between people would have such a profound effect on our lives. The idea of the internet and smart phones and exactly how those ideas were actually implemented had not really been contemplated by writers. Most focus on the mechanics of the future, robots and gadgets and such. What actually happened, the real future is much more nuanced but much like the Gutenberg Press, incredibly transformative. The real power, the real future, is in information.

T.RoseReviewed in the United States on September 7, 2018
5.0 out of 5 stars
The future from the 80s point of view
Verified purchase
If one is to judge this movie from this present time it would fall short of expectations. But...if one would travel back to the 80s to see that this movie is a cliff hanger without all the special effects then one can appreciate it for all its' action and suspense. I especially liked the highway tactics with the remote control gadgets. The acting seemed a little out of place at times...a little too script, but the story line was superb. This is the invention of Michael Crichton's mind, a futuristic thinker. All those inventions he thought of are a present day reality. A good film. I would see it again.
11 people found this helpful
See all reviews
Back to top
Get to Know Us
Make Money with Us
Amazon Payment Products
Let Us Help You
EnglishChoose a language for shopping. United StatesChoose a country/region for shopping.
© 1996-2022, Amazon.com, Inc. or its affiliates