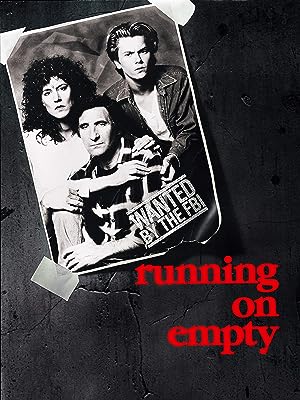 (784)
1 h 56 min1988PG-13
This is the tale of a young man whose parents were political agitators in the 1960s. Ever since the family has been changing locations, changing their names and hiding from the FBI.

Dr. PaulReviewed in the United States on June 12, 2021
5.0 out of 5 stars
Running on Empty keeps the fires burning and holds up after all these years
Verified purchase
I suppose one can admit that not all films stand the test of time, and some timestamp themselves well while others mark their place in history and leave themselves there. Running On Empty has not only stood the test of time, but takes you into the 80s and lets you explore the relationships between a family focused on a time and place in history, while at the same time, shows us that some things about family will never and have never changed. I first saw Running on Empty on video tape - way back when - and really liked it on every level, from acting by a stellar cast, to writing and direction. This is not a sweeping drama, but rather an every day, every man/woman’s film about what matters most - the love we share with others - in this case family. And a family who gave up one family to save their’s. But with aging and time moving on, the sands of time are shifting again.

River Phoenix (in what I think is his best film) is Danny Pope, the teen son of Annie (Christine Lahti) and Arther (Judd Hirsch) a couple on the run. Their 1970s college/youth activities got them in trouble with the Feds and now in order to avoid prison, they’ve spent years on the run. But time is running out - the Feds are closing in once again and now with two sons in tow, the parents have to decide what’s really important. Danny meets Lorna (Martha Plimpton) falls in love, and...

This cast cannot be beat. The supporting actors are outstanding, the main cast superb. The script is nearly flawless with characters clear, voices true, and subtleties told out at just the right moments.

When Amazon put this one on sale I grabbed it - and already have enjoyed a couple times. This one stays high on my must-watch-again list.

Pontiac GuyReviewed in the United States on November 28, 2018
5.0 out of 5 stars
Great Entertaining Movie
Verified purchase
For whatever reason, my teenage daughter became interested in River Phoenix and wanted to watch this movie so we rented it. What a pleasant surprise. Well written and good performances from everyone. Hollywood doesn't make movies like this anymore sadly, just an interesting and thought provoking story that's quite entertaining. It saddens me to think about what Hollywood did to River, but I'm glad movies like this show what a great talent he was and not just a pretty face.
8 people found this helpful

Dustin PutmanReviewed in the United States on July 2, 2017
5.0 out of 5 stars
A perfect film, looking better than ever on Blu-ray
Verified purchase
RUNNING ON EMPTY can always be counted on to move me to tears. It's one of those rare perfect films, a character drama of eloquence, compassion and consequence that fires on all cylinders. Sidney Lumet's direction is sublime. The performances from River Phoenix, Christine Lahti, Judd Hirsch and Martha Plimpton are unforgettable. It is beautifully photographed by Gerry Fisher. The list of wonderful scenes fill up all 116 minutes of its running time, but I especially adore the birthday party sing-along to James Taylor's "Fire and Rain," and another sequence between Lahti's character and her estranged father (Stephen Hill) that is simply devastating.

RUNNING ON EMPTY came out in September 1988 but it hasn't aged a day in 29 years. I am beyond happy Warner Archive Collection has given it the love it deserves with a just-released Blu-ray and a lovely new 2K remaster. One of my all-time favorites, guaranteed to stick with you long after the credits have rolled.
25 people found this helpful

R. ErpReviewed in the United States on June 7, 2020
5.0 out of 5 stars
such an extraordinary film
Verified purchase
I'm a huge fan of River Phoenix, and have been searching for good 80s movies that I haven't already seen. I definitely recommend watching Running on Empty. The acting is on point, especially River. It's just an incredible film all around. Such a raw, and pure glimpse of someone's life. It feels so close to home, even if you're life is completely different from the character's in the film. The ending had me practically bawling. This film should have gotten much more attention from the media than it did. It's much more real and heartfelt than something like Sixteen Candles, which I also love, they're just different kinds of movies. Yes, this is an entertaining film, but it can be pretty rough to watch for some people. It's not visually disturbing, but it deals with a handful of deep subjects. I recommend watching it as a family, specifically if you have older/teen children. It's also a completely different experience watching it own your own. I myself, have seen it about four times in the past four months. They just don't make movies like this anymore.
2 people found this helpful

JeffreyReviewed in the United States on December 7, 2021
5.0 out of 5 stars
Beautiful widescreen transfer on blu-ray
Verified purchase
This was such a huge improvement over the old full-frame DVD, as well as the old laserdisc I had of this film, which I LOVE. The only extra is the trailer, and the film is still in mono as it always was, but the picture quality is wonderful on this blu-ray from Warner.
One person found this helpful

Clarke DunhamReviewed in the United States on August 20, 2021
4.0 out of 5 stars
A disturtbing but important subject for film. You should see it.
Verified purchase
A very earnest film about a very earnest subject. Extremely well acted and well directed. You need to be in the right mood to watch "Running on Empty" but it's an important subject to be aware of, and a subject that is always passed over in considering our "checquered" political history. These facts deserve much more attention than they get.

AnalynReviewed in the United States on November 11, 2021
5.0 out of 5 stars
Fantastic movie! A hidden gem.
Verified purchase
I actually only found out about this movie through Motherland: Fort Salem. The creator of the show said one of the character's backstory was influenced by this movie so I decided to check it out and while it enhanced that series for me, it's a great movie by itself. The performances were fantastic and kept me engaged the entire time.

Brian CaudillReviewed in the United States on March 22, 2022
5.0 out of 5 stars
Great Acting
Verified purchase
This movie takes me back to my childhood, mostly because in my memory I knew there was a movie that had fire and rain by James Taylor, and I remember Judd Hirsch being in the movie. As I searched for it and found it I realized why I loved it so much when I was a kid.
See all reviews
Back to top
Get to Know Us
Make Money with Us
Amazon Payment Products
Let Us Help You
EnglishChoose a language for shopping. United StatesChoose a country/region for shopping.
© 1996-2022, Amazon.com, Inc. or its affiliates