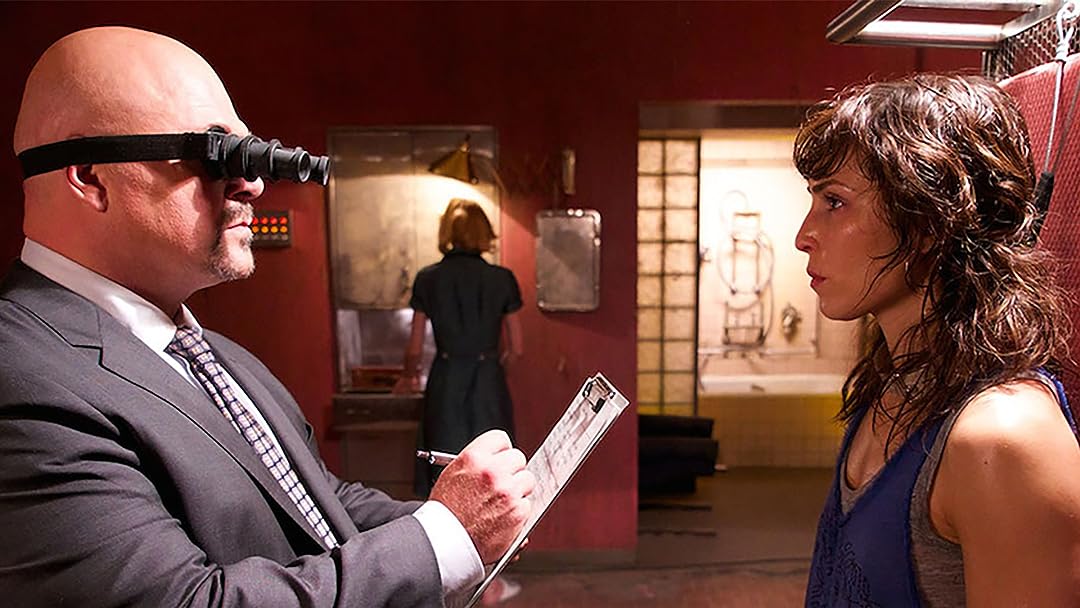 CS Doc LewisReviewed in the United States on July 1, 2021
1.0 out of 5 stars
Boring Plus Spoilers
Verified purchase
I watched this on Prime and wasted my time. I'm going to boil it down so you don't have to watch it. Massive spoiler alert...stop reading if you want to watch the movie. Divorced, single mom gets abducted by strangers. At first, it seems like they might be aliens. However, they're forcing a genetic alteration in humans by pushing them past their fears by terrorizing them. IF they survive, they live as non-feeling, emotionless who look human but obviously have no humanity left. That's it. Hopefully, I saved you 1.5 hours of your time. The script is horrible. The directing is the same. It's very low budget and even with the stars in this...it's NOT worth watching. I wouldn't even give it a single star but I had to do it so I could write this. Pick something else.
26 people found this helpful

Red LionsReviewed in the United States on June 20, 2020
1.0 out of 5 stars
Miserable bad torture-porn pointless mess
Verified purchase
This is a really trashy low budget bad film. I watched it because its suppose to be a sci-fi movie but Its only apparent purpose is to show multiple scenes of fetish type bondage and torture to I guess try to shock the audience. It didn't. It was just dumb and unpleasant.
35 people found this helpful

D. BiddleReviewed in the United States on January 24, 2021
3.0 out of 5 stars
Engrossing
Verified purchase
There is a sea of garbage superficial crap movies on Prime. I really like Noomi Rapace and science fiction so I figured I'd give this one a try. I was actually into the movie for its entire length. There are certainly plenty of sci-fi tropes but the questions of why Renee is there and who her captors are definitely kept my attention. I knew at the final moment of the movie that it was going to end there and I was so disappointed to not learn more but it was an appropriate ending. In my opinion, a five star rating should really be rare. A four star rating is excellent. A three star rating is a decent/good movie. Less than that is probably crap. I think this is definitely an engrossing entertaining movie. Excellent? Not without learning more of the story. I think it's worth checking out.
9 people found this helpful

KristianReviewed in the United States on August 30, 2019
2.0 out of 5 stars
An intelligent thriller minus the intelligence and thrills.
Verified purchase
After watching the trailer, I thought to myself "This looks pretty bad, but I'm going to watch it anyway." and I was still let down. Watching this movie feels to me what it might be like if a nerdy 10-year-old watched their first horror movie then tried to scare adults by saying "I'm the devil." In their mind, they are the embodiment of terror, but from the adult's standpoint it's just annoying, and you're waiting for them to go to bed because you have to work early in the morning but they won't shut up about it for an hour and a half and you wish you had used protection and never had this little dramatic loser who is just like his dumb uncle Edward on the other side of the family.
This tried to be an intellectual thriller, and it could have been had the writing not been devoid of intellectualism, and thrills. The acting was terrible with a capital T across the board, except for Noomi Rapace who actually decided to try even if no one else did.
Lastly (literally) this movie has the most anticlimactic ending I can recall. This should have been a five minute after school Halloween special for preteens read by Vincent Price that ended with "...but now she was one of them. Mwuahaha!" Unfortunately, the director made a 90 minute movie out of it that failed harder than that last person you saw on youtube trying a skateboard trick that fell on the handrail, landing on their crotch.
As a parting statement, I will just say that I like movies that are so bad they’re good, but this isn’t that kind of bad. It just sucks in a boring way.

Well, I just wasted an hour plus of a lazy Sunday afternoon. But more importantly, what a waste of Noomi Rapace's talent.

Avid readerReviewed in the United States on August 5, 2020
4.0 out of 5 stars
"of course this will involve pain."
Verified purchase
This is a very intriguing film, and the torture is more on the psychological scale than physical pain. It turns out she has been under heavy surveillance, and this results in her being kidnaped. Everyone involved seem so incredibly cold and professional. They act very concerned with her well being, but yet she is totally restrained and confined in a room, that is secured by a loud lock. The sound of the lock is like that of a jail cell closing behind a prisoner, and it meant to give a sense of helplessness. She is asked a lot of questions, but never given a what or why. A positive of the movie is that the reason is kept far into the story, and even then unwrapped very slowly. The title of the film is rupture, but the reason why is not going to be guessed until it is disclosed, and even then the reason still obscured. This approach helped sell the movie to me, as it is not a run of the mill story. Otherwise, I would have given it only three stars. Oh, by the way, her role shows that she is very smart. She doesn't make stupid mistakes, and for a movie with a female lead, refreshing.
13 people found this helpful

MISSunderstoodReviewed in the United States on February 8, 2022
2.0 out of 5 stars
What...did...I...just...watch!!??
Verified purchase
If I had to describe Rupture in just one word, it would be...bizarre. I could end my review right there, honestly. But I won't.

Why? That's another word that comes to mind. Why did this film need to come into existence? The screenplay is straight out of a madman's nightmares, except the madman decided, hey, why waste the nightmare when I can turn it into a laughably bad film instead. And laughably bad it is indeed.

I feel like fans of odd cult films, think Eraserhead or The Neon Demon, would enjoy Rupture. It's not scary nor particularly edgy, just intriguingly weird; like Bjork's 2001 Oscars swan dress, Rupture will be remembered for all the wrong reasons. But hey, it will be unforgettable as once seen, it cannot be unseen.

Ok, what's so bad about Rupture? Yeah, the screenplay. Just the idea of it is absurd, and I'm not even going to say why, you'll just have to watch it to find out. And then there's the most goodness-awful special effects that will have you laughing at the sight of what you are going to see. I mean, the dialogue isn't bad, the acting is solid, you'll root for the heroine; and the set design, props and costumes all created a mood, but the special effects totally tanked it.

The ending also just plain stinks on two fronts. Now, I hate when screenwriters try to be ironic in the name of an ending with a twist. The ending does offer a twist, but not a twist I wanted twisted. And the film didn't know where to end. An ending that would have already been disappointing instead kept going, leading to an even more disappointing ending that left off on a cliffhanger with no straightforward resolution.

All in all, watch Rupture for the weirdness factor. I give it 2 stars only due to the quality acting.

XyVector Media ServicesReviewed in the United States on September 19, 2021
1.0 out of 5 stars
Most Painfully Obvious Cheap Thrill
Verified purchase
From the start I was wondering if I'd finish this. Only the suspense of wondering who the people were kept me interested, but it was not Noomi R's less than stellar performance as a mother (did not pull that off). She has great fitness, i.e. legs, etc. and does well with physical feats and so her acrobatics come off on camera. But the very start with the large title and red color and creepy music did nothing for this but signal "oh no, terrifying cliche's dead ahead!" The sets were extremely cheap. I thought maybe that whole factory thing might have been used as they found it, except for the cheap colored lights they brought in. Many obvious cinema no-nos abound which include illogical twists as well. And when we do find out who these people are...massive understated disappointment and terrible ending.
One person found this helpful
See all reviews
Back to top
Get to Know Us
Make Money with Us
Amazon Payment Products
Let Us Help You
EnglishChoose a language for shopping. United StatesChoose a country/region for shopping.
© 1996-2022, Amazon.com, Inc. or its affiliates