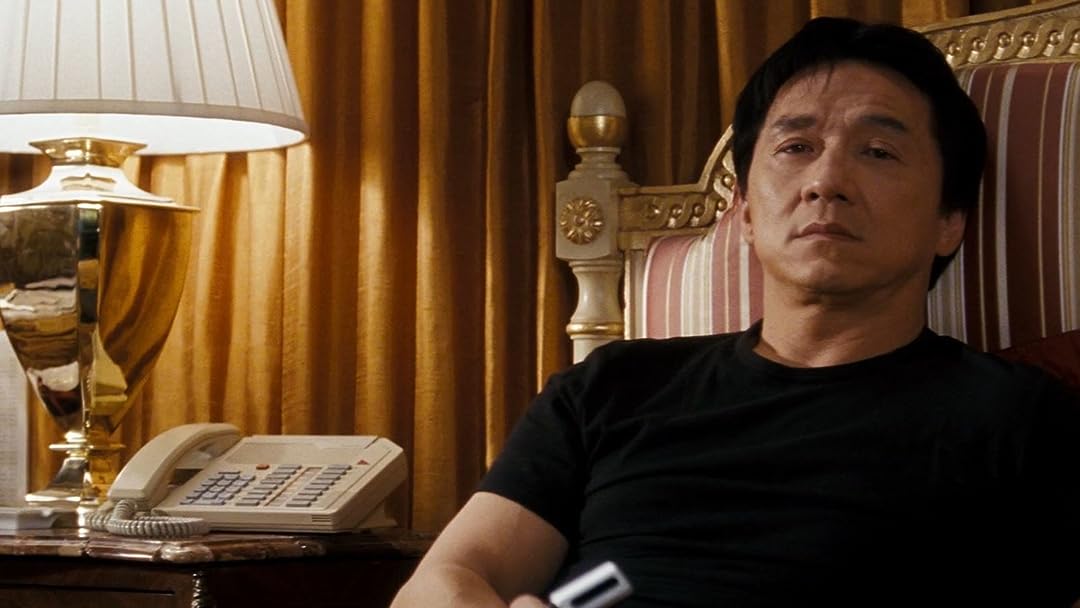 joel wingReviewed in the United States on August 25, 2020
4.0 out of 5 stars
The funniest Rush Hour of them all
Verified purchase
Each Rush Hour built on the one before it and actually got better as they progressed. Basically there was more jokes and more action in each film. This time Lee (Jackie Chan) and Carter (Chris Tucker) are facing off against the Chinese Triads which takes them to Paris, France. I think it’s the funniest of the three.

The emphasis on the jokes is shown throughout. For instance, Lee and Carter go to a Kung Fu school and Carter gets in a fight with the tallest man in the world, a very large Chinese fellow and then the master shows up and they do a play on the who’s on first routine from Abbott and Costello. Another time Lee and Carter capture a French Chinese gangster and they get into an insult match using a nun as a French-English translator.

The movie also attempts to close the circle on the entire series. Thus at the start Lee is back with the Chinese Ambassador Solon Han (Tzi ma). Lee and Carter are also reunited with the ambassador’s daughter Soo Yung (Zhang Jingchu). They obviously knew this was going to be the last in the series so they brought back familiar faces for some nostalgia.

Overall it is a lot of fun and the best of all the Rush Hour movies. The jokes are better and so is the action.
C

Dope AFReviewed in the United States on September 2, 2019
1.0 out of 5 stars
TL;DR A Sequel No One Asked For
Verified purchase
TL;DR (Too, Long; Didn't Read) Version

Rush Hour was an iconic movie that paired two seemingly different actors together to create cinema gold back in the late 90s. 9 years later, the third movie in the franchise is a sequel that no one asked for. Purely money grabs from the studios that ultimately tarnish the story of the original.

The good
- There are a few lines in the movie that are quite funny.

The bad
- The jokes from Chris Tucker falls flat and we are left with his insistent yelling and blabbering.
- The plot is widely unbelievable and unrealistic.
- Jackie Chan's character, Lee, is morphed into a sex-obsessed persona that ruins his fearless justice innocence of the original.
- The magic that was captured from the duo in the original is lost in this movie.
- The movie drags and rather than creating something new, they depend on the magic of the original to push the movie forward.

Final Verdict: Avoid this movie if you are a fan of the original.
4 people found this helpful

CherilynReviewed in the United States on October 12, 2016
4.0 out of 5 stars
Jackie Chan keeps you laughing!
Verified purchase
When watching a reviewing a movie you really need to start with your expectations. This is a martial arts comedy and as such you know there is going to be some level of sillyness and not expect it to move you all that much. It's an action movie after all. If there were no fight scenes would we even go watch it at all? If you liked the other two movies you will like this one too. Jackie Chan and Chris Tucker work well together and kept me laughing. Sure there are some parts in the movie that are vulgar. But really, are you expecting a martial arts movie to be like kids Disney movie?
I'm not sure why people are judging the movie against what it never was intended to be. If you don't like martial arts movies then why would you watch this in the first place? If you don't like stupid humor comedy, again why would you even watch it? It's not going to win an academy award for the best drama it's a martial arts comedy, indented to make you laugh and awe you with Jackie Chan's amazing fighting ability. Take it for what it is and just enjoy it!
6 people found this helpful

Jon SvensonReviewed in the United States on July 30, 2019
4.0 out of 5 stars
Can't believe I'm reviewing this years after it came out
Verified purchase
If you liked the first two Rush Hours and can look past the tired jokes to get to the action, you'll love this move. I do, and I've seen it multiple times. Jackie Chan is the straight guy while Chris Tucker is the joker, and while Chris over does it many times, Jacky is solid through and through.

A great action popcorn movie for the weekend.

Bruce WinningReviewed in the United States on July 27, 2019
5.0 out of 5 stars
Everything I like for a movie to be
Verified purchase
Like I said, everything. I like 16:9 video. I like 5.1 audio. I like punching and kicking. I like explosions. And above all, I like shooting. I like car pursuits. I planned to watch Rush Hour and then Rush Hour 2 and then this movie but Rush Hour 2 was not a Prime offering so I just skipped to the chase. I couldn't watch a Rush Hour more than once a year and I was recommended 3 so I was very glad. If you like action and violence then this is the solution.
One person found this helpful

depReviewed in the United States on February 17, 2020
3.0 out of 5 stars
Disappointing
Verified purchase
Definitely the least enjoyable of the 3 Rush Hour movies. Lacks the charm of the first two movies. Nobody seems to put much effort in the project. Chris Tucker is even more annoying than usual. The bit about Lee's almost girlfriend Isabella from Rush Hour 2 is especially distasteful. It's a shame, I like Jackie Chan, and Chris Tucker would be okay if he learned to tone it down.
One person found this helpful

GMANReviewed in the United States on May 11, 2022
4.0 out of 5 stars
Funny but not the funniest
Verified purchase
Every movie in this series went downhill from the original. But still good.

KCReviewed in the United States on September 4, 2021
5.0 out of 5 stars
Action & laughs...Loved all three of these movies!
Verified purchase
My husband, 40 year old son & I all loved all three of these movies. Full of action & laughs... need I say more?!
See all reviews
Back to top
Get to Know Us
Make Money with Us
Amazon Payment Products
Let Us Help You
EnglishChoose a language for shopping. United StatesChoose a country/region for shopping.
© 1996-2022, Amazon.com, Inc. or its affiliates