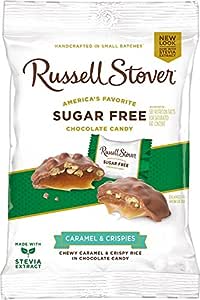 Each piece of Russell Stover Sugar Free Crispy Caramel comes individually wrapped in a 3-ounce bag. These candies with crispy rice and chewy caramel in smooth chocolate candy are made with stevia extract, delivering the taste and tradition you remember, without the sugar. Our chocolate candies have a guarantee of quality of freshness and are made from scratch with the finest ingredients. Russell Stover Chocolates is an American Classic est. 1923; Made from our hearts with tradition and passion.

The product is labelled to United States standards and may differ from similar products sold elsewhere in its ingredients, labeling and allergen warnings

Please reconsider if you live in a warm climate. Chocolate can melt shipping to warm weather areas of the country. I cannot be responsible for melted chocolate.

Statements regarding dietary supplements have not been evaluated by the FDA and are not intended to diagnose, treat, cure, or prevent any disease or health condition.

4.3 out of 5 stars
4.3 out of 5
331 customer ratings
How does Amazon calculate star ratings?
Amazon calculates a product’s star ratings based on a machine learned model instead of a raw data average. The model takes into account factors including the age of a rating, whether the ratings are from verified purchasers, and factors that establish reviewer trustworthiness.

Truth CrusaderTop Contributor: Pets
3.0 out of 5 stars Delicious, but too good to be true, be forewarned
Reviewed in the United States on January 2, 2019
Flavor: Pecan DelightSize: 3 Ounce (Pack of 12)Verified Purchase
Usually, I don't like sugar free chocolate. I've tried all the brands. Some have malitol, which has an off taste, and comes w/a warning about possible bowel issues. I guess that's ok if you want a laxative. Other chocolates like Lilly's, which gets rave reviews, though I can't figure out why, is quite expensive and to my taste has a low quality flavor and texture. They claim to sweeten with stevia, and they do, but they don't mention on the item page that they also have erythritol which again can cause issues, such as bloating, stomach cramps, and bowel issues. Then there's choczero which has monkfruit and it's ok, but every package I've ever gotten no matter what store, has had rancid nuts. So after going through all these and more, I found Russell Stover. I had tried sugar free Stover in the past and they were not good. However, recently I saw them advertised as now made with stevia extract. Stevia & chocolate! All the low carb and keto disciples rave about the combination. Well, I grabbed some of these and tasted the different candies they made. The ones I really liked were the pecan delight, and they were amazing. I thought I'd finally found something low carb in chocolate that tasted like real chocolate candy. Woo hoo! But then, I noticed some gastric side effects. I thought it was a fluke and continued on with my evening candy treat as a reward for watching my carbs. Unfortunately, the side effects continued. Shocked that stevia could do such a thing, I re-read the packaged. The front says "made with stevia extract". However, the back of the package tells a different story. I found that they have malitol. Lots of it. The first ingredient "chocolate candy" lists malitol, as it's first ingredient. Several ingredients later stevia is listed and then more malitol. So now, there's a decision to be made. These are really good, but don't think you're going to have a couple without being reminded of it for hours and hours afterwards. And if that's not enough to discourage you, after finding this out, I did some research on malitol. It's almost as high on the glucose index as sugar! What the heck! So though this product tastes really good, like real chocolate candy with sugar, it's just about as bad for you. Well that might explain why my weight loss stalled even though I dutifully watched my carbs. I should have known it was too good to be true.
Read more
65 people found this helpful
Helpful
Comment Report abuse

RockNRolla
4.0 out of 5 stars Yummy, but not good for Diabetics or Keto
Reviewed in the United States on May 10, 2019
Flavor: ToffeeSize: 3 Ounce (Pack of 12)Verified Purchase
This tastes soooo good! It is made with Maltitol, so it WILL effect your glycemic index negatively, so if you're diabetic or trying to do Keto, eat sparingly or STAY AWAY. I had to learn the hard way, as these treats kicked me out of Ketosis.
Read more
19 people found this helpful
Helpful
Comment Report abuse

D. Stoner
3.0 out of 5 stars Delicious but stomach turbulence
Reviewed in the United States on May 22, 2019
Flavor: Pecan DelightSize: 3 Ounce (Pack of 12)Verified Purchase
These are absolutely delicious; cannot tell the difference between these and full sugar. However, due to the sugar substitute in them, eating just two or three will make you gassy, and eating a bunch of them - well just don't do it.
Read more
11 people found this helpful
Helpful
Comment Report abuse

Writenow
5.0 out of 5 stars Best sugar free candy Russell Stover has EVER made. Delicious!!!
Reviewed in the United States on May 21, 2018
Flavor: CaramelSize: 3 Ounce (Pack of 12)Verified Purchase
These are my absolutely favorite Russell Stover chocolates. They do NOT have any funny after taste. They are simply DELICIOUS!!! If you have a sensitivity to some sugar free ingredients, I would caution you not to eat more than 1-2 of these. They are so rich and wonderful, you don’t really need more than that. One or two after dinner completely satisfies my craving for smooth chocolate and caramel!!! These really help me stay on my diet.
Read more
10 people found this helpful
Helpful
Comment Report abuse

Ahairst
5.0 out of 5 stars Enjoy with caution
Reviewed in the United States on May 29, 2018
Flavor: Crispy CaramelSize: 3 Ounce (Pack of 12)Verified Purchase
These are DELICIOUS, but beware that if you eat more than 1-3 a day you will most likely have gas or diarrhea because of the sugar alcohols. Have many friends who love these too and all say the same thing. They are a great treat in moderation to help with sugar and chocolate cravings, but don't go overboard
Read more
8 people found this helpful
Helpful
Comment Report abuse

Kati C
1.0 out of 5 stars AWFUL and DISAPPOINTING!!
Reviewed in the United States on October 23, 2017
Flavor: Crispy CaramelSize: 3 Ounce (Pack of 12)Verified Purchase
These are one of my favorite candies. BUT- something has changed. I just ordered a case of these and was so excited for them to arrive. When get did, I was beyond disappointed. The chocolate coating is all gray and old looking, the filling is basically non-existent and the taste is horrible, I opened multiple bags from the case and they are all the same. Definitely a let down. Don't waste the money buying these.
Read more

Paul
3.0 out of 5 stars Good taste but still unhealthy...
Reviewed in the United States on February 26, 2012
Flavor: Almond DelightSize: 3 Ounce (Pack of 12)Verified Purchase
These sweets taste pretty good, but they have substantial shortcomings. First, their sugar-free status is more of a misleading marketing ploy than an actual health benefit. Although the sweets do not contain sucrose (table sugar), they are heavily sweetened with "sugar alcohols" (largely maltitol). Because maltitol is less sweet than sugar, the manufacturers appear to be using very large quantities of it. Although maltitol has a slightly lower glycemic index than sucrose, it still increases blood sugar (glucose) levels substantially and, therefore, this food is not appropriate for people who are concerned about their glucose levels. The second problem with these candies is that, as is well known, maltitol causes significant flatulence in most people; hence, eating more than one or two candies spells intestinal trouble. Third, as is, unfortunately, the case with many sweets that are advertised as being chocolate products, the amount of quality chocolate in the candies is small; they are covered in chocolate, but their inside is primarily a maltitol-based caramel substitute, which has only health drawbacks and no benefits (compared to chocolate, which at least has some benefits). Finally, the product contains saturated fats and what appear to be, from the labeling, some form of trans fats. The manufacturers are pretty honest about the contents of the candies, but they still exploit the "sugar-free" label they are permitted to use by law, when, in fact, the product is not sugar-free - it's only sucrose free. In summary, these candies are tasty, but they contain large amounts of unhealthy sugar alcohols and fats, and larger servings cause heavy flatulence.
Read more
21 people found this helpful
Helpful
Comment Report abuse
See all reviews from the United States

Anthony Cartwright
5.0 out of 5 stars Ideal for diabetics
Reviewed in the United Kingdom on January 15, 2020
Flavor: Sea Salt Milk Chocolate Pecan DelightSize: 3 Ounce (Pack of 1)Verified Purchase
Bit costly for what you get in the packet but a nice treat for diabetics as a treat
Read more
Helpful
Sending feedback...
Thank you for your feedback.
Sorry, we failed to record your vote. Please try again
Report abuse

Disclaimer: While we work to ensure that product information is correct, on occasion manufacturers may alter their ingredient lists. Actual product packaging and materials may contain more and/or different information than that shown on our Web site. We recommend that you do not solely rely on the information presented and that you always read labels, warnings, and directions before using or consuming a product. For additional information about a product, please contact the manufacturer. Content on this site is for reference purposes and is not intended to substitute for advice given by a physician, pharmacist, or other licensed health-care professional. You should not use this information as self-diagnosis or for treating a health problem or disease. Contact your health-care provider immediately if you suspect that you have a medical problem. Information and statements regarding dietary supplements have not been evaluated by the Food and Drug Administration and are not intended to diagnose, treat, cure, or prevent any disease or health condition. Amazon.com assumes no liability for inaccuracies or misstatements about products.