The Kindle title is not currently available for purchase
You've subscribed to ! We will preorder your items within 24 hours of when they become available. When new books are released, we'll charge your default payment method for the lowest price available during the pre-order period.
Update your device or payment method, cancel individual pre-orders or your subscription at
Your Memberships & Subscriptions
There was an error. We were unable to process your subscription due to an error. Please refresh and try again.
Share <Embed> 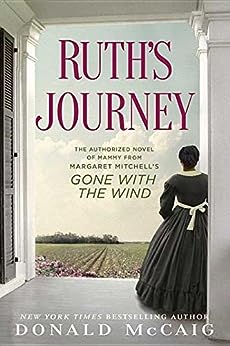 Ruth's Journey: The Authorized Novel of Mammy from

Format: Digital
See all formats and editions
Sorry, there was a problem loading this page. Try again.

4.3 out of 5 stars
4.3 out of 5
713 global ratings
How are ratings calculated?
To calculate the overall star rating and percentage breakdown by star, we don’t use a simple average. Instead, our system considers things like how recent a review is and if the reviewer bought the item on Amazon. It also analyzes reviews to verify trustworthiness.
Top reviews

Kindle Customer
3.0 out of 5 stars Depressing
Reviewed in the United States on June 19, 2018
Verified Purchase
This is a depressing book. Never finds any relief from hard down sadness.
The first half drags, but does pick up in the second half. However it stays depressing.
I admire the author, as it is well written and historically accurate. It was a depressing and shameful time in history, and the author showcases this in Ruth's story.
Kept hoping Ruth would find a smidgen of happiness. After her husband was murdered and her only child was sold then died, Ruth never loved or was loved again.
Although Ruth's story ends long before she dies, the reader knows her life never gets any better.
If the intent of the author was to make the descendents of this era of US history feel shame or anger, it falls short. It is just too depressing. It rams the horrible to the point, that it is overload.
I am sorry I read this book, something I rarely feel.
I do applaud the author for putting this story together. Obviously he is a gifted writer. Way above average. But in my opinion this book is not a good look.
Read more
25 people found this helpful
Helpful
Report abuse

Mark Schoeneman
1.0 out of 5 stars A true gone with the fan will not enjoy this book
Reviewed in the United States on April 30, 2018
Verified Purchase
A true gone with the fan will not enjoy this book. It was very confusing in the beginning and most of the way through. To many people thrown together to fast with not enough character developement. Truth is the book is barely about mammy. Also the copycats that were between Scarlet and Solange which will be explained away by granddaughter taking after grandmother. It was parts of GWTW just rebooted. There is also a part which implies Ruth or Mammy knew of the Butlers before she came to Tara. In GWTH during the drapery scene Scarlet says Rhett has the money and Mammy says who dat a yankee? Now If Mammy was so traumatized by what the Butlers did to her family I would think she would know who Rhett Butler is. Considering in this book mammy meets Rhett in the library after his and Scarlets talk.
Read more
21 people found this helpful
Helpful
Report abuse

Jennifer L. Bolt
5.0 out of 5 stars Very Good!
Reviewed in the United States on December 25, 2019
Verified Purchase
This novel gives such a fascinating background to the Mammy we THOUGHT we knew! It starts with Scarlett's grandmother in France, then Saint Domingue (later known as Haiti), where Ruth was born and miraculously survived when her entire family was slaughtered. The story goes through the drama, love, pain, betrayal, twists, turns, and surprising connections of her life as a slave mammy (and shockingly also as a "free" woman and a mother of her own child herself for a time before ever coming to Tara!) in Savannah, Georgia, Charleston, South Carolina. And of course we see her life and her coming to Tara, and eventually to rise above the other slaves (and some might say nearly equal to Mistress Ellen) at Tara, and her perspective on Scarlett, her family, Rhett Butler (and his circle, as introduced in Mr. McCaig's other novel "Rhett Butler's People"). Seeing the familiar events and characters from the beginning of Margaret Mitchell's Gone With the Wind through her eyes, her wisdom, and her foreknowledge was, while not completely surprising, gives an insight into how much slaves witnessed and knew in the Old South.
Read more
6 people found this helpful
Helpful
Report abuse

A reader
3.0 out of 5 stars It feels contrived.
Reviewed in the United States on June 14, 2019
Verified Purchase
Solange insisted Ruth speak French not Creole. Why was Ruth speaking "slave dialect" ? It seems like Solange would still speak French with Ruth when alone. I would have liked it for Ruth to learn to read. I know the author wanted to incorporate his book about Rhett Butler into the story, but the Ravenel storyline was just too contrived. Also Solange's family name, Escarlatte. Really?
It was a good story for what it was, but it did not have the feeling of Mitchell's GWTW. It tried to blend the stories, but just missed the mark.
Read more
8 people found this helpful
Helpful
Report abuse

Swing Dancer
1.0 out of 5 stars Huge disappointment.
Reviewed in the United States on April 12, 2017
Verified Purchase
I'm a huge fan of GWTW, both the movie and the book, so I was intrigued.  Big disappointment.  The first 1/3 of the book is really about Solange, Ellen O'Hara's mother; Ruth (Mammy) is a minor character.  The next 1/3 of the book is about Ruth's marriage and the death of her husband and child and is not at all the Mammy from the book or movie.  In this account she has "the sight" and can foresee someone's premature death.  In the last 1/3 of the book Mammy is again a minor character; this section of the book is about Scarlett, who is painted as a tomboy with no redeeming qualities.  There are several scenes in this book that run completely counter to the book and movie. For example, in GWTW when Bonnie is born Mammy is thrilled and tells Rhett that she has now been present at the birth of 3 generations of girls in the family. In this book she foresees Bonnie's death and is saddened.
If you're a GWTW fan, this book is not going to please you.
Read more
26 people found this helpful
Helpful
Report abuse
See all reviews

Amazon Customer
5.0 out of 5 stars quite an informative book.
Reviewed in the United Kingdom on November 6, 2018
Verified Purchase
taken from the point of view of mammy this book is quite upsetting in certain points but it is very riveting to read very hard to put down. loved it.
Read more
Report abuse

BGreenwood
4.0 out of 5 stars Good read.
Reviewed in Canada on September 18, 2020
Verified Purchase
I learned a lot about the movements of French and African people from the small island and coastal colonies around the u.s. and how they came to be around Georgia and Carolina etc... That as fascinating. And it fleshes out a very beloved character from Mitchell's GWTW.
Read more
Report abuse

Sharron Parasiuk
5.0 out of 5 stars Love it
Reviewed in Canada on November 21, 2021
Verified Purchase
Love it for gone with the wind readers
Read more
Report abuse

Wendy Hart
5.0 out of 5 stars Excellent
Reviewed in Canada on February 16, 2019
Verified Purchase
Very well done. More historical information than I expected. Can’t imagine what living as a black girl back then was really like.
Read more
Report abuse

Jennifer L.
5.0 out of 5 stars Like new!
Reviewed in Canada on July 22, 2019
Verified Purchase
Great condition
Read more
Report abuse
See all reviews
Back to top
Get to Know Us
Make Money with Us
Amazon Payment Products
Let Us Help You
EnglishChoose a language for shopping. United StatesChoose a country/region for shopping.
© 1996-2021, Amazon.com, Inc. or its affiliates