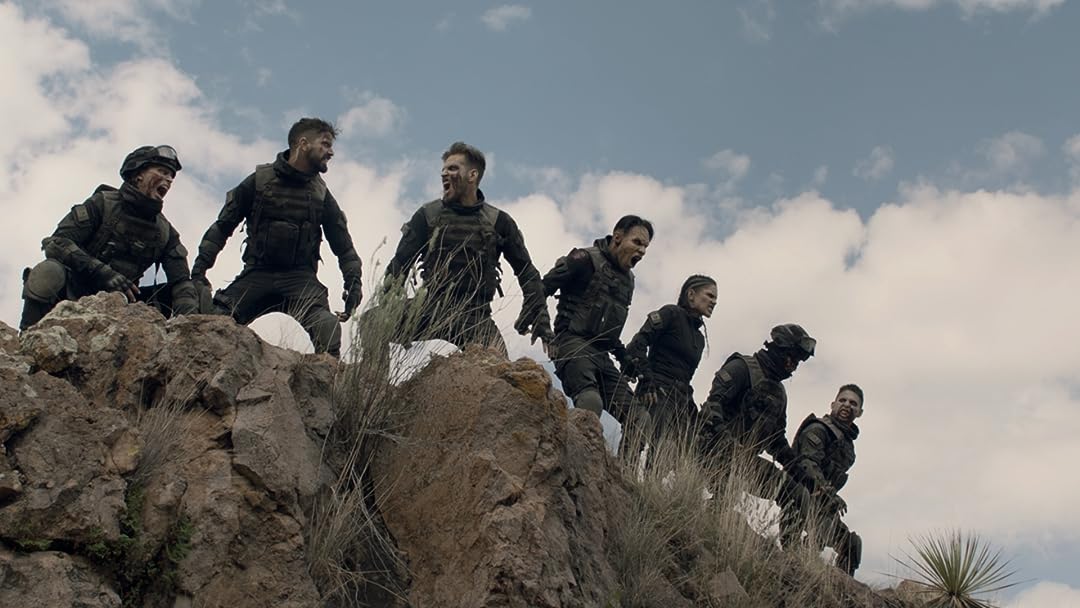 Season 1
(227)
5.42021X-RayHDRUHD16+
Drug lord Alonso Marroquín escapes from a Mexican prison in an attempt to go into hiding. A US military secret experiment goes wrong and the elite unit from the Mexican Police that is after Marroquín gets infected, creating a new zombie species. The Army and the zombies end up at the drug lord’s hideout and a battle for human survival begins.

ClaramjReviewed in the United States on August 25, 2021
1.0 out of 5 stars
Dub It And Then I May Watch It!
You know Amazon, Netflix now a days has most of it's foreign movies or shows dubbed in the language it's being shown in, for those of us who want to listen and watch movies/tv shows, NOT READ THEM!

Now I love to watch all the dubbed movies and TV shows they have, some of my favorites on there are from outside the US and from non English speaking countries, like a few European ones, Middle Eastern ones and Korean ones too, like Sweet Home, I've watched it 3 times since watching it early this year, lol!

So I have no problem watching people from other countries, I actually really love it actually, because you get to see how other people live, and get a different response to certain things!

But I have noticed that Netflix seems to be the only ones who dubs them at all, and I can't set and read the subtitles and pay attention to what is happening at the same time, it gives me a headache, I suffer from vertigo spells, and I even have trouble reading books now, I used to read a lot, especially Zombie books I got on my Kindle Fire, but now I can't!

So if I can't read my books, I certainly can't read subtitles when they go by so quick, I mean sure some of the Asian ones sometimes aren't as hard to follow and some French one's I watched, like the show the Returned, but I didn't even finish that series, because I couldn't keep trying to read and watch what people are doing!

So maybe if you decide to have a dubbed version of this, which you have labeled as a Prime Original, so why don't you take time to dub your foreign shows and movies like Netflix does their originals?

When you do and I get to watch this show, then I will change my review! But I know you won't, because everybody acts like it's some horrible because a person might want just watch and listen to a movie or a show, not read it, like we either have to except and read them or learn the languages, but what am I supposed to do, learn, Spanish, Korean, French, German and Japanese to name but a few, just so I can watch a movie or show from another country? I bet know says that to someone from those other countries, that they need to learn English to understand the shows and movies, or other languages for that matter! Non of us should have learn other languages to watch other countries shows and movies, they should be dubbed instead, like Netflix does most of the time!

I can't read those damn language..

AnonymousReviewed in the United States on August 11, 2021
5.0 out of 5 stars
A fresh, original take on the zombie genre
On the surface, SOZ is a fast paced and entertaining action show, but it is also about so much more than just zombies.

From the get go, the best part of SOZ is the fact it is so much different then any other zombie show out there. While most shows/movies center around survival in a zombie apocalypse, SOZ tackles the origins and consequences of a much smaller scale outbreak. But, the zombies aren't actually the focus of the story: the show has a much more narcos-esque plot, whose characters happen to become embroiled in a zombie outbreak.

It is very satisfying to see exactly the nature and origins of the zombies explained thoroughly for once. And, let's face it, the zombie mini pigs are just plain awesome.

The action scenes and special effects are also very well done, and the smaller amount of zombies means they are all more well developed as actual characters, as you see them all before and after their transformations.

The other great part about this show is the progression, and sense of rising tension, we see a wide variety of separate characters and groups who are inevitably on an epic collisions course, all centered around escaped drug lord Marraquin.

While the finale is the best episode with plenty of mayhem, it leaves on a big cliffhanger. One is is left with the feeling there is much more to this story for all of the characters involved, which hopefully season 2 will explore in depth.

At the end of the day, the greatest achievement of SOZ is that it makes you think differently about the drug trafficing crisis. I believe this show presents an honest view of the problem.
We are presented with drug traffickers who truly care about their families, DEA agents who care more about vendettas then justice, a corrupt Mexican justice system, and the US government who simply creates their own monsters (I am reminded of the fact the of CIA distributing and selling crack cocaine in the 1980s). I started this show thoroughly expecting the drug kingpin to be the villian, just as a surface look at at the drug trafficing world wants to blame the situation solely on the narcos and gangs. Instead we see a nuanced, multi perspectived look at a complicated situation, which has many parrelels to reality.
21 people found this helpful

Public NameReviewed in the United States on August 22, 2021
1.0 out of 5 stars
Running narrative in Spanish literally never stops
This is horrible. There is a constant narrative that is so distracting it destroys the show. Also it's in Spanish without subtitles so if you don't understand it's even worse. The actors speak at the same time as the narrator who is a “journalist” reporting. The show could have had a chance without the constant narrative. I can't believe anyone thought that was a good idea. 0 stars should be negative stars because it leaves you incredibly stressed out. You're trying to watch the show and its this constant talking over the show... I still feel the stress
20 people found this helpful

OceanGirlReviewed in the United States on August 16, 2021
5.0 out of 5 stars
It's Raining Zombiesssssss!!!!!!!
It's long overdue that we had a series with the word "zombie" the title, that's actually about... zombies!!! The other ones (you all know the ones I mean) on the network (you know the one), are long dried up. Done. Stick a fork in them. I stopped watching the first two long ago, and not even going to waste my time on the new one. Good actors, but very dead series. And there's very little zombie interaction, aka snoozefest.

Good news! The drought is over.

This show is flooded with zombies. It did have a slow start, but not enough to go lower than the 5 stars that I gave. The slow start was from covering all the bases with relevant information that absolutely plays into later, and through multiple characters.

I've been waiting and hoping to see something like this for a long, long time, and I can't wait to see what's next with this wall to wall zombie action series.

Added bonus, I get to brush up on my Spanish.

Yvonne Castañeda KnottsReviewed in the United States on August 9, 2021
5.0 out of 5 stars
AMAZING AND UNIQUE ZOMBIE SHOW
I am not usually a “horror” type fan, but I wanted to try this and I think it’s an extremely entertaining show and I love the actors, the story line, the direction, it keeps you guessing and wondering what’s going to happen next!
Great suspense too!! 👍🏽👍🏽👍🏽 I love it!!
14 people found this helpful

RocksisterReviewed in the United States on August 6, 2021
3.0 out of 5 stars
Not bad, not great
Zombie piglets and zombie sex. These were new to me before watching this series. The first three episodes were a little slow, but necessary to fill in the backstories, which jive later on. I'll be honest and admit that I watched this solely due to Toby Schmitz being in it. Huge fan. His character is basically the cause of the zombies' existence. He plays a genius scientist with a sponsored goal of creating super soldiers. The film is mostly Spanish and closed captioning wouldn't work on it, so I had to make do with subtitles where they existed. The kid who plays Lucas is going to be a big star. He stole every scene he was in. Worth watching if you like this sort of thing.
8 people found this helpful
See all reviews
Back to top
Get to Know Us
Make Money with Us
Amazon Payment Products
Let Us Help You
EnglishChoose a language for shopping. United StatesChoose a country/region for shopping.
© 1996-2022, Amazon.com, Inc. or its affiliates