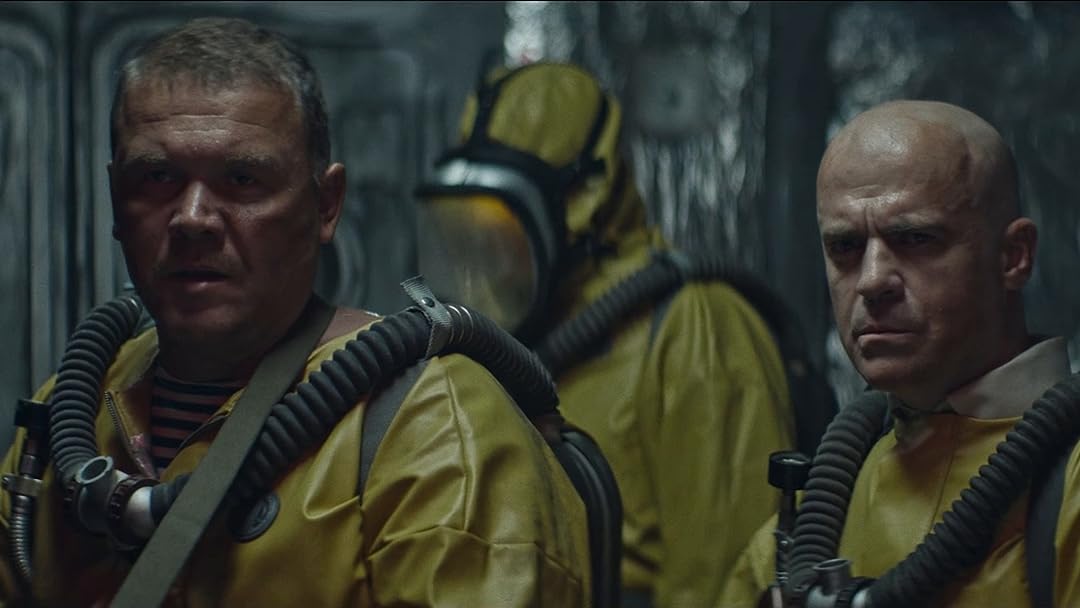 Austin O'NeallReviewed in the United States on June 18, 2021
5.0 out of 5 stars
Absolutely Terrific
Verified purchase
Found it amazing. Wasn't bored at all during the entire movie. The setup was interesting all the way through. If you're a fan of The Thing, Alien, Harbinger Down, The Void you'll feel right at home. The effects were incredible, pretty sure a majority of which were practical or the CGI was done the right way. Someone finally did it right!!! The dubs were very well done, lips didn't look out of sync at all.
22 people found this helpful

Joshua OreReviewed in the United States on June 26, 2021
2.0 out of 5 stars
Cool practical effects... that's about it
Verified purchase
The first thing I noticed about this movie was that it is Russian, but with English dub and there is no way to switch the audio back to Russian. I know not everybody likes to read while they are watching a movie, but I think hearing the lines being delivered by the actual actors may have helped with my perception of their performance. This was especially annoying because only one character has a Russian accent, everyone else just sounds American, even though they are all supposed to be Russian. I'm not sure who made that decision, but it was... unique.

Drew soooo many parallels to The Thing and The Blob, but brought nothing new to the table. I will give the effects and make-up crew props, because they were basically the only people who seemed to bring their A-game to this film.

I agree with what others are saying about the length of the film as well. There are so many sequences that are drawn out longer than they need to be, so much so that there were moments that I considered skipping ahead, but didn't out of fear I would miss something important... spoilers, you won't. I could see this doing well as a short film in an anthology, but at it's current length it is just a lot of filler.

Finally, there are so many moments of plot armor in this film it had me saying "this is stupid" out loud. Logical inconsistencies, character motivations waffling all over the place. Movie ex machina for sure, would not recommend (but good job if you worked on the effects I'm sorry your hard work went into this you guys deserve better).

M. TURNERReviewed in the United States on June 18, 2021
2.0 out of 5 stars
This movie is like calculus. It's not confusing or difficult, just highly derivative.
Verified purchase
"Superdeep" has a few fundamental problems. It doesn't have enough of a story or script to fill its runtime. It's too long by a 30 to 45 minutes, and no that's not sarcasm, alas. It concentrates too much on trying to look atmospheric but spends next to no actual effort to *be* atmospheric. The director went the old standby of trying to make up for lack of, well, everything by using color correction and lighting adjustments in post-production to make it "look dark and gloomy". At least as far as the English-bubbed version goes, the acting is genuinely awful, which matches the writing. -- I have the strong suspicion this movie was trying to be a John Carpenter's "The Thing" version of the 2020 Russian sci-fi horror film, "Sputnik". It also felt like a rip-off of that episode of "The X-Files" but just moved the location from a volcano to the super deep bore hole. -- I didn't give it a 1-star review because there are WAY, WAY worse movies out there. Still, avoid this one.
15 people found this helpful

A. Mazon UserReviewed in the United States on June 29, 2021
5.0 out of 5 stars
Shockingly good!
Verified purchase
This was far better than I expected. The plot made sense, the acting was good, even the effects were good. Russia is really becoming a world-class film producer. I wish "DOOM" had been this good (and this was probably done far more cheaply.)

In brief - a morally compromised doctor is offered a chance to "redeem herself" by taking a risky assignment to investigate a suspicious problem at the world's deepest drill site, in Siberia. Of course, things go from bad to worse to horrible, and chaos ensues. But it moves right along, isn't boring, and is quite plausible. (And pretty scary, after living through the COVID pandemic.)
12 people found this helpful

ceyReviewed in the United States on June 24, 2021
5.0 out of 5 stars
Pretty awesome - recommend
Verified purchase
This was the first movie I watched after subscribing to SHUDDER and it was a good one. Common tropes, for sure, but well done. The woman protagonist was great and the ending was a big question mark. The only thing I would have changed ... have everyone speak in Russian and have English subtitles - I think that would have improved the experience, actually. This is what I joined SHUDDER for!
10 people found this helpful

Jim TrentReviewed in the United States on September 17, 2021
2.0 out of 5 stars
For a bunch of scientists they are dumb.
Verified purchase
But see...Russians believe mask mandates work. A highly contagious mold spore can be blocked with a little cloth mask. What scientist sees a room covered with this mold and walks in to check it out without and protective gear. Then tells everyone to not open the door because it will contaminate everything. Lucky for her they had a fire extinguisher which it seems counters all those mold spores.

What kind of grenade goes off a few feet from a helicopter and just blows out a window? This movie was a mess. Not because of acting or anything else but because the script was so stupid. It was a Russian made movie so what did they want to do? Show the world they think everyone in Russia is stupid? They must not have anyone there with any kind of science classes because if they did they would have smacked them upside the head.
5 people found this helpful

JPReviewed in the United States on June 21, 2021
5.0 out of 5 stars
Surprised the hell outta me!
Verified purchase
Overall this was fantastic movie from a first time director on a two million dollar budget. Heavy inspiration from The Thing, Resident Evil, (the games not the shitty movies) and Doom. Wish it was in its original language with subtitles and not the horrible dub option instead. The heavy use of practical effects over cgi is always refreshing and the creatures look absolutely horrifying. The movie has some pacing issues and drags on a bit too long. Other than that though this is a great Sci fi horror movie worth checking out!
9 people found this helpful

Human ShieldReviewed in the United States on January 26, 2022
2.0 out of 5 stars
Couldn't finish this one
Verified purchase
This idea had a lot of potential - heck, there was already an urban legend about the real drillers finding Hell itself, and it caught the imagination. Unfortunately, the concept is in the hands of people who don't really know how to build tension, explore their own concepts, establish a coherent mystery, write interesting characters, create a believable setting, or any of the other things you kinda need to tell a good story. I gave up way later than I should have. Also, in a movie set in Russia, why does only one character speak with a Russian accent? Could you not find more Russian actors? Were you uncomfortable having your other actors fake their accents? It's really distracting.
One person found this helpful
See all reviews
Back to top
Get to Know Us
Make Money with Us
Amazon Payment Products
Let Us Help You
EnglishChoose a language for shopping. United StatesChoose a country/region for shopping.
© 1996-2022, Amazon.com, Inc. or its affiliates