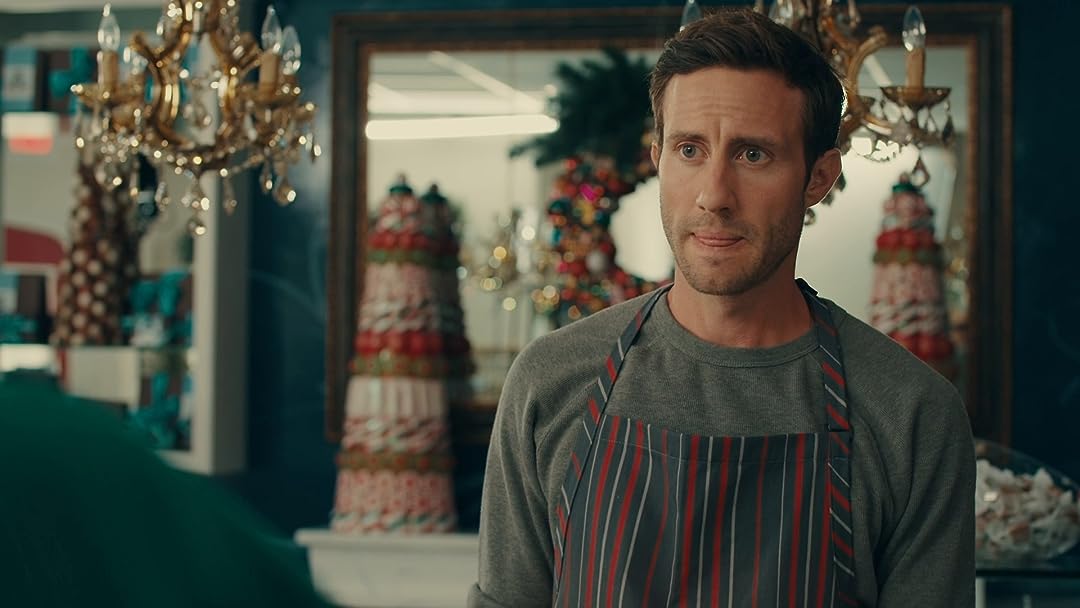 (175)
1 h 24 min20207+
When Sadie’s boyfriend cancels their plans, she decides to spend Christmas with her parents, only to find they’ve sold the family’s chocolate store to a stranger who knows nothing about chocolate. She’s the obvious choice to help teach the new owner everything she knows about chocolate and she discovers that not everything has to be perfect. Sometimes, when you least expect it, you find love.

Karen M.Reviewed in the United States on March 14, 2021
5.0 out of 5 stars
Sweet Wholesome Romance!
Verified purchase
I was glad to see Jason Burkey in this movie. He's acted in many wonderful Christian films, and it was good to see him portraying a Christian in this movie, although that was not the focus of the story. Malone Thomas, the leading lady, did a great job as well.

Mitchell BrockReviewed in the United States on April 10, 2021
5.0 out of 5 stars
Really sweet.
Verified purchase
This movie has everything. Love, family and life. All waa needed was the faith to bring those 3 together to form a family.

Sarah CReviewed in the United States on December 22, 2021
4.0 out of 5 stars
Good movie
Verified purchase
Cute movie. Not my favorite but overall enjoyable. Family friendly.

LesReviewed in the United States on March 8, 2021
4.0 out of 5 stars
Enjoyable Movie
Verified purchase
I enjoyed this movie. Nice storyline and believable acting.

ARTReviewed in the United States on November 23, 2021
5.0 out of 5 stars
Yes
Verified purchase
Not a bad movie

H. BalaReviewed in the United States on December 28, 2020
4.0 out of 5 stars
you had me at chocolate this and that
For much of the year, Lifetime rolls out its slate of unsavory programming, these sleazy reality shows and bio-flicks that put shine on true-to-life crimes and scandals. But, come November and December, Lifetime shows the world its soft, gooey, sappy center. My Sweet Holiday - a.k.a. Chocolate Covered Christmas - premiered on December 25th on Lifetime and officially closed the books on 2020's batch of new, original holiday movies. And it's a good movie to go out on. It stars a pair of new faces, new to me, anyway. Malone Thomas and Jason Burkey create some sparks in their scenes together.

The plot revolves mostly around Sadie (Thomas), who is a marketing executive in California. Except promoting and advertising products isn't her true passion.

I guess you put it on her boyfriend to galvanize this plot. He's in Europe attending a work-related function (cough**party**cough), despite his promise to spend Christmas with Sadie. Now, it's not mentioned whether this was the final straw that put paid to their relationship, but, right then and there, in her mind, Sadie crosses him off.

What's a girl to do when going thru heartbreak during the holidays? A girl goes home. Sadie goes home to spend Christmas with her parents and runs into further heartbreak. Unbeknownst to her, her parents have sold their beloved chocolate store, Annadore's, and have retired. Sale becomes official in January.

Sure, maybe Sadie could've been more gracious, more happy for her parents. But there was a time in her childhood on up when she'd looked forward to inheriting and running Annadore's. Trained by her parents, having grown up in the chocolate shop, Sadie was a natural chocolatier. Still is.

There's chocolate, and then there's Annadore's. And maybe you can't blame her for mad-dogging the new owner, especially when she finds out this stranger knew nothing about making chocolate. Yeah, it's totally on Sadie that she and Alex Mitchell (Jason Burkey) clashed from jump. She sure didn't appreciate her dad's volunteering her to show Alex the ropes.

My pattern when watching these made-for-tv holiday flicks is that I side with the leading lady over the guy. It's because, a lot of times, the guy is portrayed at the start as a snide, condescending jerk until later on when the script flips it so that, suddenly, the jerk morphs into this sensitive, caring dude. I'm so over that. Thing is, Alex is a cool hombre from scratch, nice, polite, and thoughtful. No issues with him whatsoever.

But, oboy, I sure was judgy of Sadie, starting from when she had a snit when she found out her parents sold the shop. Sadie is resistant to change. She's a prisoner to tradition, one of them folks who do things a certain way because that's the way it's always been done. And Alex gently calls her out on it. When he mentions he might outsource some of the chocolate-making process to cut costs, an outraged Sadie insists that every stage of the chocolate-making must be done in-house at Annadore's because, well, they'd always done it that way.

Maybe the most damning thing we learn about Sadie is that she quit on her culinary dreams because she lost a gingerbread contest. I dunno, did that seem like a very bratty move to anyone else?

If the plot had settled only on Sadie's inducting Alex into the arcane ways of making chocolate, this would've been even more of a lightweight movie and a one-note dramatic conflict. But Sadie does love her parents, and, so she decides to orchestrate a Christmas Eve bash to celebrate her parents' retirement. Look, her dad just gave her a list of his guests. That's fifty guests. That's not counting her mom's own list of guests. So, now, Sadie must plan for a hundred guests plus. I never did get why Sadie decided that each guest just had to have their own gingerbread house, other than the plot needed something else to trigger one of her freak-outs later on. Every chance it got, the plot connived to take Sadie out of her comfort zone.

Despite Sadie's melodrama and peccadillos, I had fun with this one. Chocolate enthusiasts are in for a treat as the movie shallow-dives - as opposed to deep dive - into the process of making chocolate treats like truffles and toffees. Sadie even throws in a protracted history lesson about truffles, even though no one asked her to.

The photography work is great. We get to take in magical shots of the town that's basking in the glow of Christmas. The marvelous, occasionally atmospheric music score is sure to put you in the holiday mood. Naturally, the lead actor plays a widower and single parent. So, of course, there's an adorable little girl (Remi Hilson), and you'll have to carry on curbing the urge to say, "Aww" each time she's on screen. And maybe the biggest stunner is that the ex-boyfriend - who was partying in Europe - never does show up at Sadie's hometown to wreck things. I almost passed out in shock.


8 people found this helpful
See all reviews
Back to top
Get to Know Us
Make Money with Us
Amazon Payment Products
Let Us Help You
EnglishChoose a language for shopping. United StatesChoose a country/region for shopping.
© 1996-2022, Amazon.com, Inc. or its affiliates