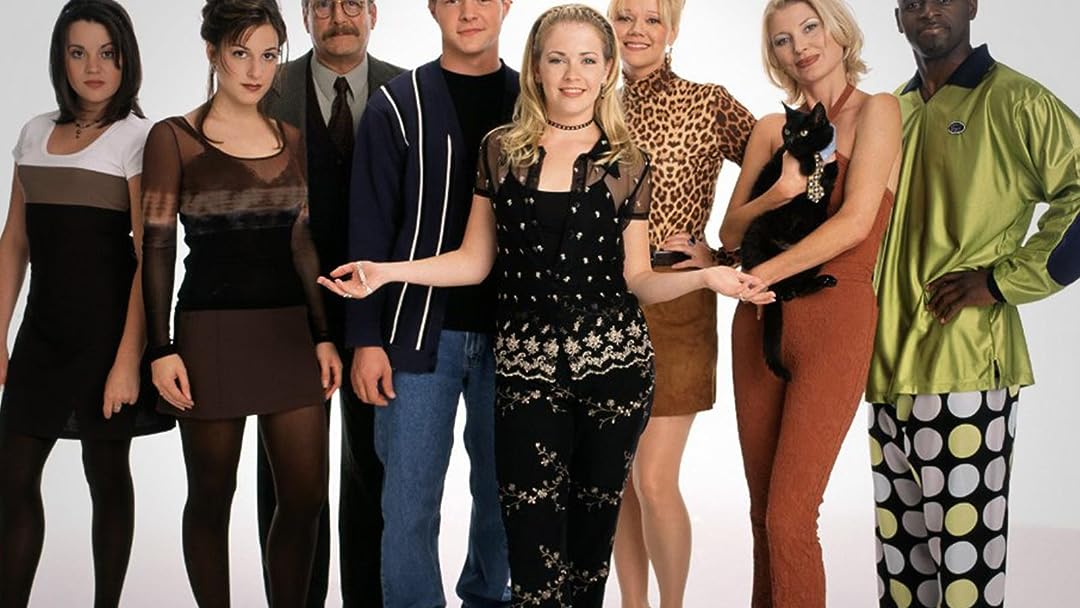 (2,205)
6.71997X-RayTV-G
Sabrina is a normal teenager, except for one thing -- she's a witch! Guided by her aunts, who come from a long line of witches, and Salem, a mischievous warlock doing penance as a black cat, Sabrina continually struggles to harness her powers while wittingly wreaking havoc on friends and foes alike.

Stephanie StirlingReviewed in the United States on July 11, 2018
5.0 out of 5 stars
Great sitcom from yesteryear
Verified purchase
I love this series. I grew up watching Melissa Joan Hart first as a kid in Clarissa Explains it all and then her next big show was this.

The premise is in this series apparently magic stays dormant until a witch becomes a teenager. Now Sabrina Spellman who lives with her aunts who are also witches and a talking cat named Salem who was a person that had been turned into a cat for some reason but I don’t remember why.

Anyways as she started High School her magic power begins to manifest. She deals with the what all high schoolers go through but with the added twist she’s learning magic which she has not only learn proper spells but the morality of when you use magic or not.

The show can be cheesy at times but that was sitcoms during 80s and early 90s but also it’s very family friendly which also was that era too.

Sterling WrightReviewed in the United States on July 23, 2015
5.0 out of 5 stars
My favorite show!
Verified purchase
Really really good show. I remember watching the show a little bit as a kid (I'm 21 now), but I remember that it was good. After watching all the seasons, I wonder why they can't make these kind of shows anymore. I love how they used different sets and had witty dialogue and the witch thing allowed them to get very creative. I also like how there was always a moral lesson to be learned and it was not just about trying to shock you and impress you with fancy special effects. I also liked how they weren't trying to just use cleavage or crude humor to bump up their ratings. When will the cast return and continue this magnificent journey???!!!!!!!!
20 people found this helpful

Anne LittlepageReviewed in the United States on September 25, 2021
4.0 out of 5 stars
Sabrina the Teenage Witch
Verified purchase
Sabrina is one of my favorite shows and doesn't air on TV very much. When I saw that Season 1 was available I decided to get it. I'm watching a couple of shows right now and will continue to watch my favorite episodes of that season. The disc doesn't go right to the episodes and has some promotions. I would like to purchase Season 2 and Season 3, but it doesn't look like Season 2 is available right now.

SusanReviewed in the United States on March 30, 2020
5.0 out of 5 stars
Arrived very early & in brand new condition as stated in advertisement.
Verified purchase
It arrived very early, or all things I'd ordered it was supposed to come the latest. But was first. It's brand new, and the sound and picture is great to. I have ordered some even that the sound was so low that mtg g volume was up to 80+ before I could hear it normally. The sound versus the people's mouth movement matched. Sounds good but some will know what I mean. No dubbing in other words I guess is putting it better. I'd recommend this seller and product if you loved this show.

Mark Baker - Carstairs ConsidersReviewed in the United States on July 28, 2008
4.0 out of 5 stars
The Magic Begins
Verified purchase
Sabrina Spellman's (Melissa Joan Hart) life is changing. She's just moved in with her aunts Hilda (Caroline Rhea) and Zelda (Beth Broderick) and is starting a new school.

But that's not all. On her sixteenth birthday, Sabrina learns that she is a witch who is just starting to get her powers. So not only does she need to fit in at school, but she needs to hide her powers for fear of being labeled a freak. And there's the fact that their cat Salem talks (voiced by Nick Bakay).

On her first day of school, she quickly makes friends with idealistic Jenny (Michelle Beaudoin) and develops a crush on Harvey (Nate Richert). Unfortunately, she also draws the distain of head cheerleader Libby (Jenna Leigh Green). And she has to survive biology with Mr. Poole (Paul Feig).

This school year will be anything but easy as she turns Libby into a pineapple, learns that messing with her friends lives can cause terrible things to happen, makes a magician invisible, gets trapped in a mirror of her own bad mood, turns Harvey into a frog when they kiss, and faces her own worst fear when Libby accuses her of being a witch while on a field trip to Salem, Massachusetts. Who ever said being a witch was easy?

I actually started watching this show with season two, but have caught season one multiple times in reruns. Maybe it's because I started later, but I've never found this to be one of my favorite seasons. Don't get me wrong, there are plenty of laughs. But it just seems a bit like the show is still finding its feet. Of course, that is pretty normal for many shows in their first year.

This show definitely falls into the fantasy category, and it creates its magical world well. I do laugh quite a bit at the situations Sabrina gets into over the course of the season. The acting is good. Most of the special effects work, although a few are a little obvious, especially the puppet version of Salem in the early episodes.

This set contains all 24 episodes from the season on four discs. There are no bonus features, although the full frame picture and stereo sound look and sound great.

There isn't anything serious about this show, but it isn't trying to be serious. Instead, you'll get a funny show set in a creative fantasy world.
2 people found this helpful

CkesReviewed in the United States on July 15, 2016
4.0 out of 5 stars
Loved it when it was on tv
Verified purchase
I loved this show when it was on tv. The quality is not as good as other shows but that probably has more to do with when it was made. It's a nice cheesy show to put on while I'm putting away laundry because it doesn't require you to pay 100% attention.

The show itself is about a teenage girl lives with her two aunts who are witches. Sabrina has just received her powers and is learning to control them as well as navigate high school.
7 people found this helpful

Catie LucasReviewed in the United States on July 20, 2015
5.0 out of 5 stars
Like a modern day Bewitched!
Verified purchase
Love this show! It reminds me of watching Bewitched when I was a child, and now my child has Sabrina. Some of the content is questionable at times, I assume to appeal to a middle school crowd. I was surprised two boys mentioned they were virgins in the second episode (during the truth sprinkles episode), but aside from that would rate it PG. I like how this show makes it "cool" to just be yourself.
7 people found this helpful

Tami RReviewed in the United States on July 24, 2016
5.0 out of 5 stars
Reminds me of my childhood.
Verified purchase
I watched it when I was a little kid and I just started watching it again. Usually when watching shows you loved as a kid you realize how much it sucked. Sabrina I still love to this day. I watch it while in the bath after a long stressful day of work and it reminds me of my childhood when life was easy and stressless. I plan to buy the Whole series on DVD because I love it so much.
3 people found this helpful
See all reviews
Back to top
Get to Know Us
Make Money with Us
Amazon Payment Products
Let Us Help You
EnglishChoose a language for shopping. United StatesChoose a country/region for shopping.
© 1996-2022, Amazon.com, Inc. or its affiliates