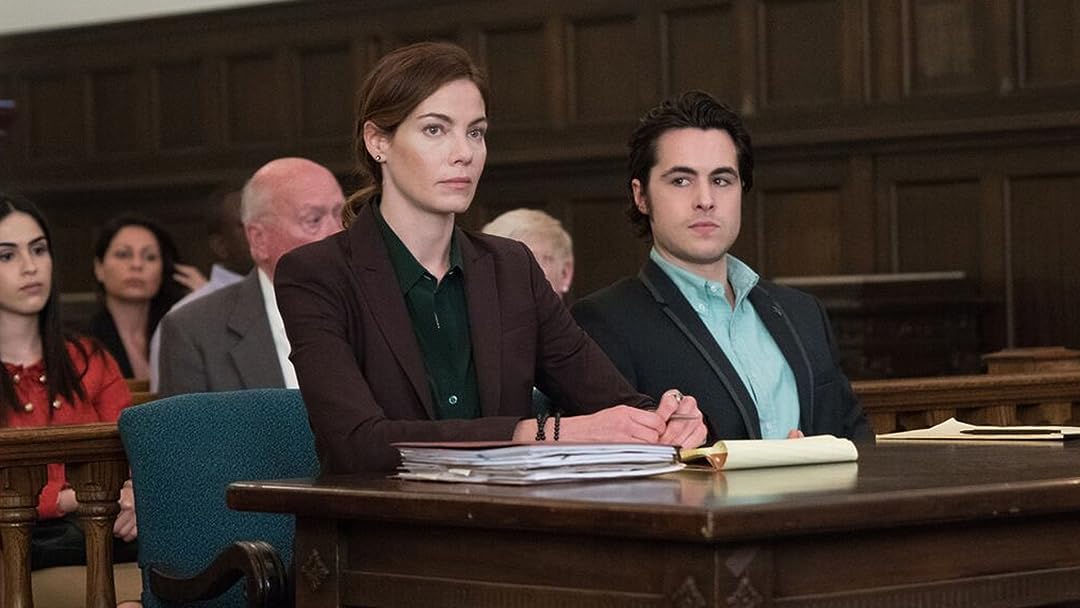 (260)6.41 h 46 min2019PG-13
The true story of immigration attorney Judy Wood as she represents and fights for Asefa Ashwari, an Afghan woman who fled her home country after being persecuted by the Taliban. Despite setbacks and losses, their efforts culminate in arguments before the United States Court of Appeals for the Ninth Circuit, as they seek to save not only Asefa's life, but countless others across the world.

Tracy L SmithReviewed in the United States on June 29, 2019
5.0 out of 5 stars
A Real Film: Humanity Before Everything.
Verified purchase
Some have touted this film as an agenda piece from the director to push his political views on the audience. Yet, there are so many more layers to this story and the characters that one can begin to uncover throughout the film.
I don’t think anyone but Monaghan could’ve played Judy. She is not heavy in her words or actions. She’s not gritty or callous. She exudes downright determination & a desire for the ethical protection of human rights.

It’s easy to criticize a film like this in the political climate we live in today. Everyone is all riled up about immigrants whom some only see as free loaders and criminals. Take all of that away and here is Asefa who the US is not willing to protect despite her “most certain death” warrant. How? How can any law come before humanity in such a case?

Her village and community want her to come home so they can make an example of her. That’s their plight. To stone her, stab her, or perhaps cut off her head. There are conservatives who have vehemently screamed for the Taliban to be demolished and taken down since 9/11.

Yet, many, if not all of them, would say to this woman, “go back where you came from.” Never stopping to learn of her story. What she was fighting for or the courage it took to stand up for women (not afghans or Pakistanis or islamists). Women.

Hanish brings out the defeat every single person involved in this case feels when her asylum continues to be denied. Disappointment, astonishment, maybe even embarrassment knowing their country will have blood on its hands by sending her back.

He accentuates how easily one can be led to succumb to the defeat and not do a little extra work. “Sorry. There’s nothing we can do.”

This is what a doctor tells a patient dying of cancer. Not what one should tell a person who is fully alive and fighting the good fight! A doctor would try everything possible to save a patient from Cancer. Not give up without more research and trials. Molina portrays this as you will see when his “policy” and experience begin to open up for the real issues and not shadow them.

This film did not spend the entire time on Judy’s fight to gain her client asylum. I read another review that explained her situation as a “Typical wannabe hero attorney who fights for everyone but her family. What did she expect?” I never once felt the “wannabe hero” vibe from Judy. Her client was always in the forefront.

This superb film zeroed in on Asefa’s crusade to protect and uplift women for who they should be. Hanish designed his film by allowing the rise in a return to human compassion and the willingness to not give up to inspire and give us back a bit of decency.

SundariReviewed in the United States on July 10, 2019
4.0 out of 5 stars
Worth the watch
Verified purchase
I thought this was a pretty well-done film. As other reviewers have noted, today's political climate is really hot around the immigration issue. Even though I am quite conservative politically, I thought this film did a pretty decent job of presenting a very worthy immigration case in a fair manner. There were a few small moments that felt "agendaized" but for the most part I thought the director did a good job of not doing a full-out bash job on our immigration officials. I would have liked it if they had gotten more info the oppression the woman in Afganistan lived under, because I think people need to know more about that. Otherwise I enjoyed the film and would recommend it, especially for younger people who maybe don't know some of the history with the Taliban, etc.
10 people found this helpful

J.J. LyonReviewed in the United States on June 15, 2020
5.0 out of 5 stars
"All Rise" Delve in Where Law Meets Politics
Verified purchase
If it pleases the court, I will address the negative review first: Bad acting. I would say there was not enough prep time for perfect acting, but not bad. This movie squeezed in as much detail as it could in an hour and forty minutes. Any more expectations and it would have been 2 hours - which I'm fine with. I understand there were no robots, animals, animation, or sex scenes that saved the actors. Just as in the movie Nothing But the Truth, this story is heavy. Actors can't just show up and be Navy SEALs, rape victims, or immigration lawyers, we will always see through it. Experience and survival of the actual people is key and makes the movie more serious and stressful, which actors don't have but try because they have compassion.

This movie just like my favorite movie and my top 10 captures the emotion, truth, and the story. This was as perfect as this movie could be with the time they had and the money they used. They captured the characters in the right actors - and it always helps when a pretty woman is the main actress. So, I would not show this to anyone under the age of 14, maybe 15 because of the emotional heaviness when they are still in the neurological phase of attaining logic and experimenting.

Here are my top movies (no order because each are unique): 13 Hours: the secret soldiers of Benghazi, Case for Christ, Only the Brave, Patriot's Day, Bope II, My All American, Hacksaw Ridge, Just Mercy, Paadmavat, Zero Dark Thirty, Raazi, Manikarnika: the queen of Jansi, Breach, Unthinkable, Megan Leavey, End of Watch, The Blind Side, Sicario, The Great Alaskan Race, Argo, The Female Brain, The Stoning of Soraya M., Temple Grandin, Septembers of Shiraz, and Noble. All these movies portray the world. A world forgotten and never fought enough for. A world that only hits the big papers once a year. This is war, the real war. This movie shows a fight to unite law and politics in a pioneer way. A way that would have been buried if it never happened to women. This movie did make it on my aforementioned list now. BUT!! It was close of not being. If it downplayed reality anymore it would not have. I would like to have seen WHY she was able to pay her bills and would like to have seen more of the logistics. This story is great and it is important because she was a pioneer in the law field, so this is important. You are safe to watch it and will not feel like you wasted your time. Enjoy! Check out my other movies and let me know what you think. Let's dialogue; I'll bring my bachelor in Criminal Psychology and experiences around the world in the Military Police. Pleas click "Helpful" and follow me to see my seldom reviews of other awesomeness.
2 people found this helpful

Kindle CustomerReviewed in the United States on August 30, 2019
5.0 out of 5 stars
Saint Judy is uplifting, inspiring based on truth so it is not gooey sweet story but, real and raw .
Verified purchase
Michelle Monaghan did not disappoint. Her performance as Saint Judy brought her plight to life. She was real and moments were raw just like life is. Right away I did not see the actor Michelle Monaghan I saw the attorney, Saint Judy. The movie showed the good and bad side of the legal system and the good and disappointing side of people who are working the system and work within the system. Some individuals are a disappointed of course however others show promise. I found faith in the human race again watching someone find their way back to at least giving a damn. The movie lifted my spirit and gave me hope. The fact that it's based on truth is what was so inspiring. This true story gave me hope and a reminder that even in hard times there are still good people among us.
3 people found this helpful

Robin F. KatzReviewed in the United States on July 12, 2020
5.0 out of 5 stars
Eye-opening, inspiring film
Verified purchase
This film presents the gripping precedent-setting legal story of an immigration lawyer and her client - who are both shown to be strong and determined women. The client, a woman from Afghanistan, is incarcerated in the USA while trying to save her own life by seeking political asylum here. The filmmakers do a good job of showing how deporting the asylum-seeker would be life-threatening because of the custom of "Honor Killings" - as raped women in Afghanistan are murdered by their male family members. In addition, the film clearly explains the key legal difference between being abused in a foreign country for being a woman (which isn't sufficient for granting asylum), compared with being attacked and tortured for being a woman who advocates for other women (which might ultimately be judged sufficient). Other themes are also nicely explored - such as the conflicts from balancing the challenging demands of being a parent with the intense demands of being a passionate advocacy lawyer. The film also shows the challenges of running an advocacy-based law firm with almost no funds - because clients, though deserving, have little or no money to pay. The acting of the entire cast throughout the film is nuanced and believable, delivering an informative message that is inspiring and truly uplifting. Highly recommended!

Jennifer A.Reviewed in the United States on August 9, 2019
5.0 out of 5 stars
The CourageTo Lay Your Life on the Line
Verified purchase
True story of a woman beaten and raped by the Taliban for starting a school for girls. In the US applying for asylum she is drugged and left in prison. If she loses her case, she will be deported and murdered in an honor killing by her male relatives. Inspiring and moving story of the woman (and her young determined lawyer) fighting for her life and for what is right. Well worth watching.
3 people found this helpful

SeababushkReviewed in the United States on December 25, 2019
5.0 out of 5 stars
Great movie.
Verified purchase
Loved this film. It is entertaining and eye opening. You get an education without knowing you are learning something important about the character, our past, and what we must fight for today.
This Director has a great future in film if he keeps cranking out this type of film. We look forward to seeing Notre of his work.
2 people found this helpful

brownsarahanneReviewed in the United States on June 29, 2019
5.0 out of 5 stars
Worth watching
Verified purchase
In the current political climate, with immigration issues on the forefront (yet alarmingly tossed aside by most U.S. citizens in their day-to-day lives), this movie is a compelling example of what happens when one fights for liberty and justice for all. Not only that, it is an inspirational story that has personally reminded me of the value of endurance and that the path to success is most assured by NEVER GIVING UP.
4 people found this helpful
See all reviews
Back to top
Get to Know Us
Make Money with Us
Amazon Payment Products
Let Us Help You
EnglishChoose a language for shopping. United StatesChoose a country/region for shopping.
© 1996-2021, Amazon.com, Inc. or its affiliates