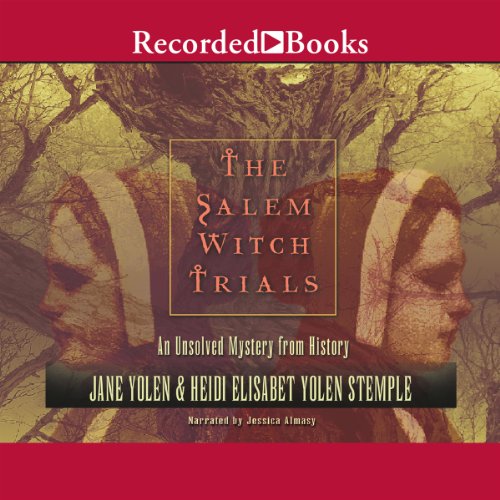 The Salem Witch Trials: An Unsolved Mystery from History

During the long, cold winter of 1692, seven young ladies from Salem, Massachusetts, begin to display disturbing symptoms. They’re convulsing, contorting, cowering, and croaking strange sounds. Finding no help from medical books, the village doctor declares them bewitched. Having already triggered more than 60,000 executions in Europe, the fear of witchcraft begins its work - even among sensible, down-to-earth New Englanders. And before it’s all over, 141 people are arrested - 19 women are hanged, one man is crushed to death, and four others die in jail.

But long after the damning “testimony” of ghosts - seen and heard only by the “bewitched” - was forever banned from courts, one question remains: What really happened?

4.5 out of 5 stars
4.5 out of 5
48 global ratings
How are ratings calculated?
To calculate the overall star rating and percentage breakdown by star, we don’t use a simple average. Instead, our system considers things like how recent a review is and if the reviewer bought the item on Amazon. It also analyzes reviews to verify trustworthiness.
Top reviews

toomanybooks
4.0 out of 5 stars Well done. Don't leave out this part of history.
Reviewed in the United States on November 21, 2015
Verified Purchase
This is a good book to introduce the Salem Witch Trials to kids. It's not scary and the format of a history mystery is interesting and fits the story well. It's a sad period in history and it shouldn't be skipped. Important lessons can be learned like, "Don't make things up or accuse people of something they didn't do. The consequences cannot be undone." My 2nd grader found it very interesting.
Read more
2 people found this helpful
Helpful
Report abuse

Nella
5.0 out of 5 stars Great jumping off book on the subject
Reviewed in the United States on May 3, 2018
Verified Purchase
We literally read this in one sitting with my two ten year olds. The various theories and supporting arguments are well laid out. This book invites conversation, which I love.
Read more
One person found this helpful
Helpful
Report abuse

Kindle Customer
3.0 out of 5 stars Great artwork!
Reviewed in the United States on August 31, 2014
Verified Purchase
Great, easy to read story set up as a mystery. Allows the reader to choose between 5 possible solutions at the end. Pictures are better than the story! For children in grades 2-5
Read more
Helpful
Report abuse

Allan H Jodrey
4.0 out of 5 stars Four Stars
Reviewed in the United States on June 8, 2015
Verified Purchase
The same old stories, but then I have been to Salem many times.
Read more
One person found this helpful
Helpful
Report abuse

Christine Baker
5.0 out of 5 stars The Salem Witch Trials: an Unsolved Mystery from history
Reviewed in the United States on April 18, 2013
Verified Purchase
The book is great and kind of like gives u the experience to see/live in the time of the Salem Witch Trails!!! The book was so good that I forced my family to go the Wax Museum based on the Salem Witch Trials!!!!

Trish9
4.0 out of 5 stars Good historical narrative for grades 4-6...
Reviewed in the United States on November 22, 2012
Verified Purchase
I used this book to tell this sad story in our early history to grades 4-5. It is a good choice
for struggling readers; the illustrations and the vocabulary boxes help convey meaning.
Nicely done- it makes history accessible to all!
Read more
One person found this helpful
Helpful
Report abuse
See all reviews
Back to top
Get to Know Us
Make Money with Us
Amazon Payment Products
Let Us Help You
EnglishChoose a language for shopping. United StatesChoose a country/region for shopping.
© 1996-2021, Amazon.com, Inc. or its affiliates