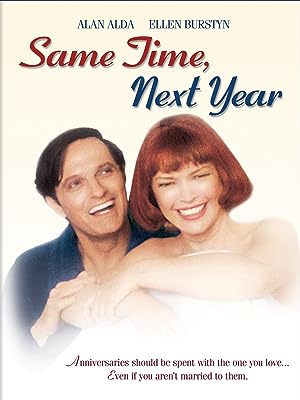 (2,212)
7.21 h 58 min1978PG
When Doris (Ellen Burstyn), a young housewife from Oakland, and George (Alan Alda), an accountant from New Jersey, meet by chance at a rural California inn, they embark on an affair that brings them together on the same weekend, in the same place, for the next 26 years.

hollyReviewed in the United States on October 22, 2022
5.0 out of 5 stars
Great movie
Verified purchase
I haven't seen this movie in years. I love it. I read other reviews with people talking about infidelity. That is true, but this movie is also about love and communication. Even though I am divorced, I still believe in love and commitment. In some weird way, this movie is about both.

Tim LukemanReviewed in the United States on October 25, 2020
4.0 out of 5 stars
Looking back from an ever-changing present
Verified purchase
Returning to this old favorite decades later is an experience not unlike that of its protagonists in the final sequence, as they look back on their lives & how they've changed over the years. In fact, it's the sort of film that bears re-watching over time, as a reminder of how we change & grow (or don't), and how what seemed so urgent at the moment may seem much less so upon reflection. And vice-versa, of course!

Everyone knows the plot: two married people meet at a seaside inn, have a brief encounter, and return each year thereafter to renew it. Some see this as a glorification of adultery. I don't think so. It's in many ways more of a literary conceit, a frame for following both the lives of two fairly ordinary people, as well as the changes in society over a quarter of a century. And that particular quarter of a century saw tumultuous changes indeed.

Does this make the film "dated" as some say? Well, that word is horribly overused these days to dismiss anything older than five minutes ago as passé & not worth one's attention. But the fact that it covers a specific period of time & captures the feelings of that time is what makes it work so well. For anyone born afterwards, it offers a funny & sometimes moving time capsule of America from the 1950s to the 1970s. This was life for your parents ... or by this time, your grandparents. This is what they lived through & what shaped them. And so in many ways also shaped you.

But more to the point, in its examination of passion, guilt, friendship, politics, culture, mores & attitudes, it's actually quite timeless. For anyone with even a modicum of depth, those issues are always present, always real, always important. That it examines them in a somewhat exaggerated fashion might be a sticking point for some, I know. But it is a comedy, after all, and exaggeration often emphasizes real truths.

Now, let's talk about the performances. Alan Alda is good, if drawing a little on his portrayal of Hawkeye on M*A*S*H—it might have been interesting to see Charles Grodin, who originated the role on stage, carrying it over to the screen. But Alda had more marquee value, so ... Still, he gives a solid performance. And his portrayal of the early 1970s laidback man going through the human potential movement is an accurate gem. But it's Ellen Burstyn, who did carry over her role from the stage, who really shines here. She brings Doris to life through all of the many changes that the times brought to women in particular then. No wonder George fell for her!

If not a great film, it's a warm & charming one, with poignant moments that punctuate the comedy, just as they do in real life. It can't quite escape its stage origins, but I really don't mind. For me, it's the relationship between the two characters, and their relationship to the constantly changing times, that really counts. I especially like the B&W montages that transition between 5-year intervals—though I'll bet that increasingly younger viewers will need annotations for many of their images by now. :)

For me, the film is a returning to people who are old friends by now. Recommended!

Johnnie NolesReviewed in the United States on July 8, 2022
5.0 out of 5 stars
A Classic!
Verified purchase
This is a real classic. Alan Alda and Ellen Burstyn are at their best in this movie. They play a couple who meet once a year. Both are married to other people and have good marriages but they also love each other. Their meetings reflect the changes in themselves and the world they live in as our country goes through the sixties and seventies. Each time they meet, they are different people and they have to explore and relearn each other with each annual meeting. I saw this movie about forty years ago and then saw it again recently and it is as relevant and entertaining today as it was when it came out around 1978
2 people found this helpful

S737Reviewed in the United States on September 11, 2022
5.0 out of 5 stars
A simply fantastic movie.
Verified purchase
Ellen is marvelous in her role. Oscar material. Highly entertaining movie

BertaReviewed in the United States on September 6, 2022
5.0 out of 5 stars
Great movie
Verified purchase
I love this movie

AnneReviewed in the United States on July 20, 2022
5.0 out of 5 stars
Love This Movie!
Verified purchase
I loved this movie when it first came out and wanted to see it again, but it's not streaming anywhere. I'm glad I bought it. It's just as good as I remembered.

Blanche SarongReviewed in the United States on July 18, 2022
5.0 out of 5 stars
One of my favorite movies
Verified purchase
I watch this on rotation with Moonstruck & When Harry Met Sally. I love the passing of time & how the characters change with the times. Also love the theme song.

RaeReviewed in the United States on August 8, 2016
5.0 out of 5 stars
A Genuinely Well Transfered Celluloid Film On DVD, Upscales Well, Good Sound, Plus It Is A Great Film
Verified purchase
I won't review the film as so many great reviewers already have. I just wanted to add that, even though this is not available on blu-ray, this DVD upscales very well on a blu-ray player. It doesn't look as good as a Sony DVD from an action film produced in 2015 but that isn't because of the transfer, it is because this was filmed on celluloid and was transferred from a master that was already about twenty-five years old at the time they mastered the DVD. The quality is very good considering those issues and this DVD really holds up well to scrutiny on video and audio quality. As to the film, I tend to me the more conservative of my friends and was always getting compared to the Alan Alda character as a result so, after many years of not seeing this, I finally sat down to watch it. What I can say is, first, yes, I get it, I'm Alan Alda in the body of a lovely lady. Also yes, this is a beautiful love story but, more than that, it is a wonderfully heartfelt and spectacularly well acted portrait of America, of what we've been through, what we've done to ourselves, what's been done to us, how all of these huge events, everything from cultural revolutions to revolutions of the weapons variety, have affected us as a nation and as individuals just trying to make it through our lives. These two simple and average characters, in the guise of these magnificent actors, represent so many of us so accurately in terms of how these changes affect us and how we change from knowing each other and listening to different views. I love this film so if you are considering it, please stumble on over to one of the real reviews so you'll know why you should watch it. Good luck in finding what you are looking for.
3 people found this helpful
See all reviews
Back to top
Get to Know Us
Make Money with Us
Amazon Payment Products
Let Us Help You
EnglishChoose a language for shopping. United StatesChoose a country/region for shopping.
© 1996-2022, Amazon.com, Inc. or its affiliates