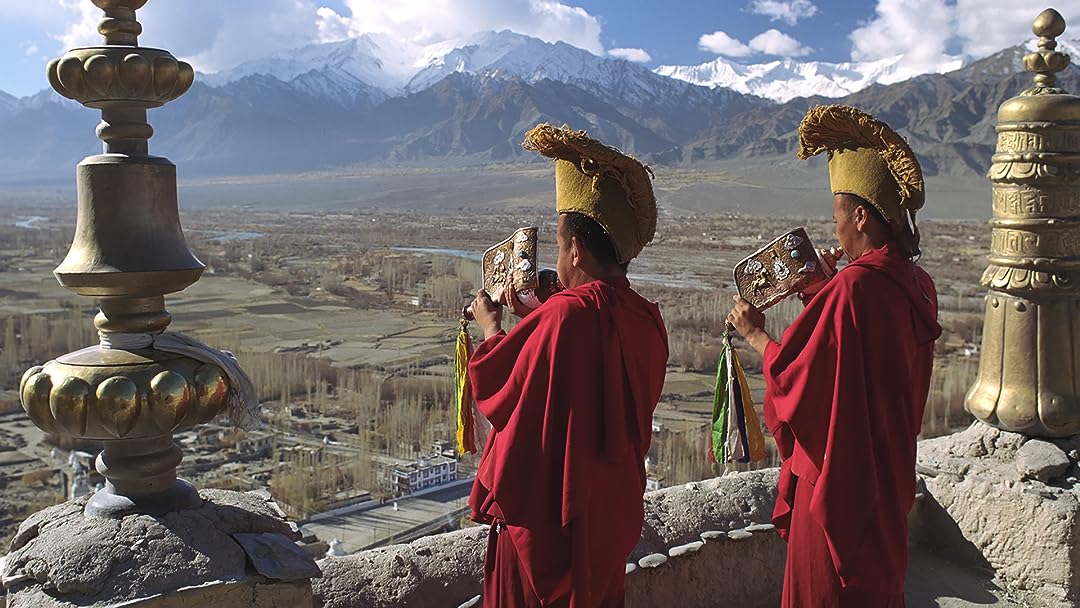 FigurineReviewed in the United States on June 25, 2018
5.0 out of 5 stars
but book-ended to this are scenes of amazing Buddhist artistry and performance
Verified purchase
An imagery-trip around the world, one thing tying to the other, in what amounted, to me, as a rather nihilistic view of mankind, that we should decay back into dust. I can't disagree with it, as it isn't saying anything. It just shows us our honest devestation.

It isn't all ugly. Much of the film we see the destruction our desires have on the world, but book-ended to this are scenes of amazing Buddhist artistry and performance. These Buddhist-arts require so much time, energy, and devotion. And they exist only as things to do in the moment. The Buddhists spend hours creating an intricate mandala of sand. They smile at it, a culmination made from so many people, probably hundreds of hours, and then they just wipe it away. The joy was had, the creation is done, why attach to it any longer? This Buddhist-ideal juxtaposes harshly to the rest of the film.

Great filming, and melancholic. A reviewer on the cover calls the film "uplifting". I'm doubtful that person even watched the film. It's not uplifting at all, because it really shouldn't be. But it does carry beauty in it, and sort of seems to persuade at the end that we needn't worry about mankind's impossible problems, because sand and dust will solve everything in time. Not uplifting, but I wouldn't call it dreary either. It is, at the very least, honest, and at times, beautiful.

cheryl swReviewed in the United States on May 9, 2020
1.0 out of 5 stars
Do not watch if you struggle with depression.
Verified purchase
I do not usually write reviews but found this movie so horrible that I wanted to negate the 5 star reviews with a description rather than that I could not get it to play. I watched it, but skipped through parts, because it was so tedious, contrived, pretentious, expected, slow, and oberblown. There is no dialogue or narration, so there is no way to know the point with any certainty, but I believe it has something to do with the fact that modern over-consumption causes continuous misery for all human beings. I believe many who would choose this movie based on its existing 5 star reviews would agree with this premise; so it is basically preaching to the choir and nothing new. I absolutely do not recommend this movie for anyone struggling with depression. It could send one over the edge and I found it difficult to sleep afterward.
25 people found this helpful

Doug PetteyReviewed in the United States on May 25, 2020
1.0 out of 5 stars
No Refund!
Verified purchase
I know it's only an hour and 42 minutes long, but that's 9 years of my life I'll never get back.
We watched this based on Cinefix's list of uplifting films. I guess I'm not trusting them anymore, either. Just because a film is shot in 70mm does not automatically make it beautiful or art. I don't EVER need to see sex dolls or chickens being processed or prostitutes on a rotating display stand, much less when I am trying to watch something, "uplifting!" I certainly don't need to see men in Mecca being visually connected to said chickens, either. This is not profound just because they got Dead Can Dance mimics for the soundtrack. Ugh!
13 people found this helpful

M DouganReviewed in the United States on July 24, 2018
5.0 out of 5 stars
Stunning
Verified purchase
Stunning is the best word to describe it. Amazing scenes most of us will never see. Natural beauty, human beauty, man made beauty contrasted with colossal human waste and poverty and the aftermath of violence and natural destruction. It has a beautiful soothing soundtrack which plays behind all types of scenes, the exquisite and the horrible, underscoring the idea that neither are good or bad, but that this is life, that is what Samsara is. You can't watch this without drawing comparisons to the film Koyaanisqatsi. Koyaanisqatsi, with its often jarring soundtrack by Phillip Glass meant to illustrate life out of balance, where I believe this film, with its harmonious soundtrack illustrated life in balance, but to be balanced, you will find both the exquisite and the horrible, two sides of the same coin called Samsara.
16 people found this helpful

Ben NelsonReviewed in the United States on July 10, 2018
5.0 out of 5 stars
A Fascinating Addition
Verified purchase
If you enjoyed any of Ron Fricke's other films, you will love this one. It is an amazing film on its own, but I greatly enjoyed comparing it to Koyaanisqatsi, filmed 30 years prior, on a second watching. While some scenes were absolutely beautiful to watch, other ones had me glued to the screen because they made me think about the impact we are all having on one another and the planet. This film is both enjoyable and thought-provoking to watch, and it is hard to say that about most movies.
Now I will sit around for the next couple of decades hoping that Fricke decides to complete his own personal trilogy of films.
11 people found this helpful

Piaw NaReviewed in the United States on October 11, 2018
4.0 out of 5 stars
Not as impactful as Baraka
Verified purchase
Baraka is the only BluRay in my collection I ever wore out from watching it too much. (It also got loaned out quite a bit, so it wasn't just me) But somehow I missed Samsara when it came out in 2011! Well, it made it into the Amazon Prime Video free selection so I watched it.

As with Baraka, it's a movie without words, so you can take your non English-speaking parents to watch it, for instance. It's full of beautiful images from the natural world, as well as images from the not-very-natural world, all juxta position. The movie was filmed in 70mm, so the quality of the image is nothing short of amazing.

For me, it didn't have the same impact as Baraka. The opening sequence, while haunting, hardly has the same impact that the snow monkey scenes in Baraka did. The time lapse photography, which was rarely seen when Baraka came out, is now a common staple in many documentaries, so as a viewer I no longer found it fresh.

Still, if you watched Baraka and enjoyed it, you should watch Samsara at least once. It might not be as impactful as Baraka, but it's still very different from the other stuff out there. Recommended.
2 people found this helpful

Slader MatthewReviewed in the United States on April 25, 2018
5.0 out of 5 stars
To See is to Believe
Verified purchase
For a movie with little to no dialogue, I was moved. I originally watched this in a film theory class and could not believe what I saw.

EVERY CINEMATOGRAPHY or anyone that wants to be one, NEEDS to watch this. Every single shot is well thought out and captured in a stunning 8k resolution.

This movie is not for those with a weak heart. It will open your eyes to things that just seem too sad to be true.

Amazon CustomerReviewed in the United States on January 5, 2019
1.0 out of 5 stars
No thank you. I prefer Planet Earth.
Verified purchase
Boring. Pretentious. No, sorry, but you cannot improve on perfect: Koqaanisqatsi. Music: boring. Shots: seen a million of those. Editing: not very creative. There is just no flow, no atmosphere to this film. It does not engage you, it is just some random “spectacular” shots of lands far away mish mash, the stranger, the better, yet no purpose to them whatsoever. Sorry, but “sequels “ often fall far, far short of the original. Wild, breathless, from the gut, groundbreaking, one of a kind, against all odds, must make it, once in a lifetime first instincts.
4 people found this helpful
See all reviews
Back to top
Get to Know Us
Make Money with Us
Amazon Payment Products
Let Us Help You
EnglishChoose a language for shopping. United StatesChoose a country/region for shopping.
© 1996-2022, Amazon.com, Inc. or its affiliates