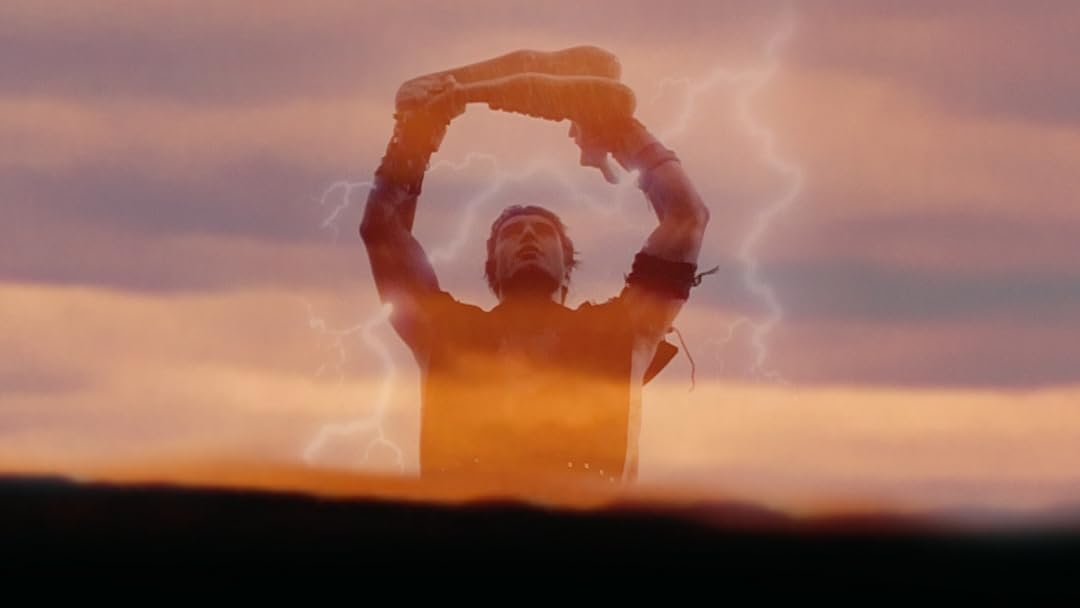 (51)
1 h 35 min198413+
God entrusts the brave and noble Samson to destroy the Philistine invaders in Canaan. God's path blurs for Samson when he falls in love with the manipulative Delilah, a woman appointed by the Philistines to uncover the secret to Samson's strength.

Jnanda Moksha BrahmanandaReviewed in the United States on November 5, 2020
1.0 out of 5 stars
atrocious
Verified purchase
too long of a list for dislikes. please save yourselves and do not watch. please watch Samson And Delilah (1949) Starring: Hedy Lamarr , Victor Mature , George Sanders, Directed by: Cecil B. DeMille A MUCH BETTER FILM

RobertReviewed in the United States on December 18, 2018
1.0 out of 5 stars
A terrible, awful piece of garbage.
Verified purchase
Acting, plot, script, accuracy, all are a fat ZERO. Couldn't stand watching after 20 wasted minutes.
5 people found this helpful

PeriwinkleReviewed in the United States on August 1, 2020
1.0 out of 5 stars
Samson's hair, anyone?
Verified purchase
I didn't get real far into this because the very foundation that is Samson's story is missing: his long locks that had never been cut ever in his life.
One person found this helpful

FrKurt MessickReviewed in the United States on November 4, 2005
3.0 out of 5 stars
Not a strong production
Verified purchase
The story of Samson and Delilah is one of the better known stories from the Hebrew Bible/Old Testament. It seems strange, therefore, that films almost always get the story wrong.

This 1984 version of the Samson and Delilah story gives Max von Sydow, the governor of Philistine Gaza, the top billing, because the stars playing the title roles were not as well known. Belinda Bauer portrays Delilah in a sultry but somewhat flattened role, and Antony Hamilton is 'introduced' as a new star, despite having made appearances prior to this production. Belinda Bauer is considered an American actress, despite being born in Australia; Antony Hamilton is considered an Australian actor, despite being born in Britain. The desert lands of the setting for this film are definitely not Gaza nor the northern end of Israel/Palestine, so in many ways things are very mixed up. One does want to give a willing suspension of disbelief in any theatrical or cinematic release, but sometimes the small items add up to too much, if there isn't substance elsewhere to carry the film.

Hamilton, Bauer and von Sydow give tolerable performances, perhaps edging even toward good. However, the script is stilted and lacking in depth - whenever there seems to be a point of principle or 'meaningful' moment, it becomes a bit more like an item of kitsch. Each of the three main actors have turned in much better performances in other productions that one knows there is skill there, particularly with von Sydow, but it is lost in this production. Jose Ferrer, another veteran actor, has a slightly-more-than-cameo appearance, but is generally wasted as a pontificating priest without much depth. The script was written by John Gay (prolific television/teleplay script writer), based on a novel 'The Husband of Delilah' by Eric Linkletter. This departs considerably from the biblical text, and unfortunately not in ways that would give new meaning or added meaning to the story.

Perhaps director Lee Philips (also known for television direction in series such as 'Dynasty' and the film 'Hardhats and Legs') was hoping that the occasional display of beautiful bodies would distract the viewer from noticing the overall lack of substance. Both Bauer and Hamilton have sex appeal, but even here it tends to be wasted by second-rate camera angles and lighting, quick edits and cheesy music that made this a B-film even when first released.

The fight sequences between Samson and the lion, Samson and the Philistine garrison, and Samson and the Philistine army are poorly choreographed (the fake lion edited in with the real lion in portions looked obviously fake, as if someone borrowed a child's toy lion as the prop). The final Temple-crushing scene is tolerable, but even then the architectural detail is wrong - it was very clear the Temple did not rest upon the columns Samson pushed over, and the camera maneuvering to get Sidka, the Philistine governor, to be positioned under the falling idol was very poorly done.

I was astonished to learn that this production had an Emmy nomination, and of all categories for Outstanding Achievement in Hairstyling (Jan Van Uchelen). Perhaps this was for Delilah's hairstyles, which are okay, but as Samson's legendary strength is tied to his hair, I found myself thinking all through the film, 'He has terrible hair!' Hamilton's good looks were generally lessened by having a bad-hair day all through film; it was only when it was cut at the end that he began to look reasonable.

I was also astonished to learn that the composer of original music for this piece was Maurice Jarre, who wrote the music for 'A Passage to India', 'Ghost', 'A Walk in the Clouds' and 'The Year of Living Dangerously', films that I love, and from which the music is memorable. This sounded like 50s or 60s retreads from other B-films, sadly failing to augment the story or the setting.

Perhaps the most detrimental part of this show was the cameo by Victor Mature, who played one of the more memorable Samsons in film history, opposite Hedy Lamar, directed by Cecil B. DeMille. Even that film was a B-film, albeit a good B-film from an era in Hollywood when such biblical epics and pseudo-epics were written to a generally appreciated formula. Mature plays the father of Samson here, Manoah, but gives such a sad performance here I didn't recognise him, even though I knew he had a role in the film before I put the disc in to view! Perhaps it proves the point Mature made once, when applying for membership to a country club that didn't accept actors as members, 'I'm not an actor - and I've got 67 films to prove it!'

This film apparently was also nominated by BAFTA for best short film, and I cannot but wonder what was lacking in short films that year that this production would get such a nod.

If you're interested in the Samson story, this will not be a film to give new insights. If you're interested in seeing Antony Hamilton or Belinda Bauer in various states of undress, even then this film will disappoint, as there aren't many good scenes for that, either. I'm truly surprised this wasn't an Alan Smithee production. I really wanted to like this film, as Hamilton made so few productions before his untimely death, and in general I tend to like biblical epics, von Sydow films, and several of actors here. But alas, it was not to be.

Watch at your own risk.

Kindle CustomerReviewed in the United States on April 15, 2022
1.0 out of 5 stars
It's awful
Verified purchase
It's a shame when good actors like Max Von Sydow get stuck in bad movies.

William E. HendryReviewed in the United States on May 23, 2018
2.0 out of 5 stars
don't waste your time. ...so bad i don't know where to start...better off reading the bible.
Verified purchase
very bad. the original, victor mature, superior in every way
One person found this helpful

Sandra J.Reviewed in the United States on April 27, 2013
5.0 out of 5 stars
Samson & Delilah 84
Verified purchase
The remake of samson and delilah was good but the origional was better i only got this copy because of antony hamilton but the remake wont disapoint
See all reviews
Back to top
Get to Know Us
Make Money with Us
Amazon Payment Products
Let Us Help You
EnglishChoose a language for shopping. United StatesChoose a country/region for shopping.
© 1996-2022, Amazon.com, Inc. or its affiliates