You've subscribed to Sanctum Nights! We will preorder your items within 24 hours of when they become available. When new books are released, we'll charge your default payment method for the lowest price available during the pre-order period.
Update your device or payment method, cancel individual pre-orders or your subscription at
Your Memberships & Subscriptions
There was an error. We were unable to process your subscription due to an error. Please refresh and try again. 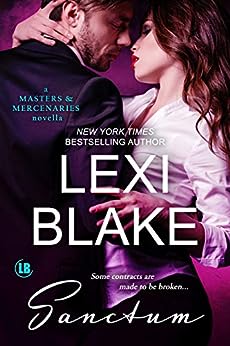 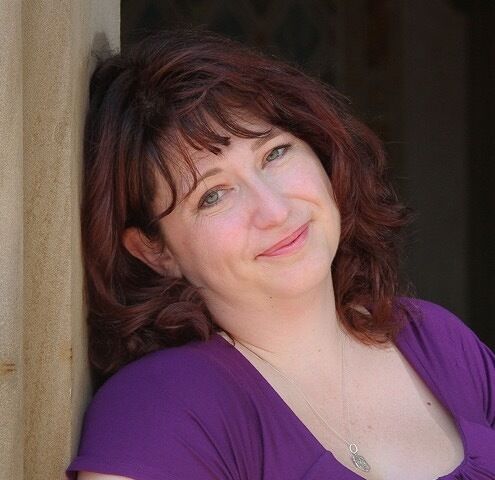 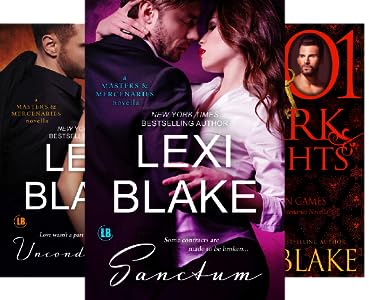 4.7 out of 5 stars
4.7 out of 5
371 global ratings
How are ratings calculated?
To calculate the overall star rating and percentage breakdown by star, we don’t use a simple average. Instead, our system considers things like how recent a review is and if the reviewer bought the item on Amazon. It also analyzes reviews to verify trustworthiness.
Top reviews

Jay Lane
3.0 out of 5 stars Nice folks. Nice book.
Reviewed in the United States on August 19, 2020
Verified Purchase
SANCTUM Masters and Mercenaries Book 4.5
Lexi Blake
Ryan shoved Jill off on Keith because Keith had the money she deserved. 1.5 years later, Ryan works at Sanctum and must hire a new manager in the bar. Interviews start NOW. First applicant in the door is... Jill! Both are stunned. He had been betrayed at his old business and destroyed. She never knew. He had wanted to be extraordinary...did he still? Jill and her sister live in a walk up so bad Ashley is naming the rats. Her assessment of Ryan? "Dayum!" Keith is actually still his friend; they cobble together a new business deal. He reprioritizes his values and his life. Now... will she listen? Then she learns she was also to blame and wants to make it right... will he listen? Nice folks and nice book.
Read more
Helpful
Report abuse

Casey C
4.0 out of 5 stars HOT
Reviewed in the United States on July 31, 2014
Verified Purchase
Novella from the Masters and Mercenaries series, this story follow the manager of Sanctum, Ryan and his ex-sub Jillian.

Ryan has been a wreck the past two years without Jillian in his life. He asked a fellow Dom friend of his to take over the contract he had with Jillian when he felt he couldn't care for her anymore.

Little did he know that Jillian's past two years have been just as hard on her. Not because of the fellow Dom, but because she gave up the lifestyle and has been struggling to make ends meet.

She get hired at Sanctum as the bartender position, and as fate would have it, these two love birds rekindle their attraction for one another.

Of course, Jillian is too scared to be "given away" again, but I don't blame her for that. And of course, Ryan wants nothing more than to do whatever he can to be with her again after seeing the error of his way.

Their attraction is fast and hot. They know each others bodies already and that's nice in a novella so a lot of the first time nervousness doesn't happen. I also really enjoyed the female lead role having piercings. She was the first I've ever read that had a few piercings already and it made the sensual scenes even better!

Great novella. I'm not normally a fan of them, but I really love this series and since I skipped over it when I read the other books, I'm glad I went back to it so I could actually see the outcome of Ryan/Jills arrangement.
Read more
One person found this helpful
Helpful
Report abuse

jennifer schultheis
4.0 out of 5 stars Quick read. Lots of passion.
Reviewed in the United States on September 19, 2017
Verified Purchase
Sanctum is part of the Masters and Mercenaries series and is considered book 4.5. It’s a quick read that brings two lovers back together. Ryan and Jill used to have a dominant and submissive relationship but when he went broke, he gave her over to his friend. Now, he works for Ian and manages the club. When Jill walks in looking for a job, he’s floored, but gives her the job anyway. There is still plenty of attraction between the two and working together at the club only makes it hotter. But Ryan’s rejection of Jill is still hanging over both of their heads. Will they both be able to communicate their issues or will this be the end of them?
Read more
One person found this helpful
Helpful
Report abuse

Ryan, who now works for Ian at Sanctum, previously gave up his submissive Jill when he realized he could no longer fulfill the terms of the contract that they'd signed. His contract had promised to care for her in all ways, including financially, and his CFO had just embezzled tons of money and put Ryan in danger of going to jail. Unfortunately he didn't talk to her about this because he was, again, trying to take care of her. And she didn't tell him that being given over to a friend (only her care was arranged for, not sex) made her feel like he didn't care about her at all but that she loved him.

A year and a half later, they meet again at Sanctum where he's the Dom-in-Residence and she's applying for a job.

Their story is what happens when two people hold onto pride and stubborness rather than communicating. The miscommunications are all too believable, although watching them go through them is painful.

The things about this book that make it worth buying even if you don't care about Ryan and Jill and their awesome little story:

* Adam in the Dom class that he has to take to be a true master to Serena inside of Sanctum (and poor Ryan has to train him)
* Ian's idea of a pep-talk to his Dom-in-Residence when he realizes that Ryan isn't having any kind of sexual relationship with any of the subs
* Ian's idea of playing fairy godmother to try and bring Ryan and Jill together
* Jill's sister Ashley who is 1. hilarious and 2. totally needs a little novella (or maybe even a full length novel) about her and Simon because I now seriously want them to get together... he needs some shaking up and I love her personality

If you haven't read the other Masters and Mercenaries books I think you'll still enjoy it as a stand alone, but it won't be AS enjoyable as if you were already familiar with the other characters and their side stories. This might be a good way to check out Lexie Blake and see if you like her writing style before trying out her full length novels.

My only complaint - I REALLY wanted the last scene of the book to continue so that I could read about all the Doms making fun of Adam... I'm not going to say anything more except that it involves a toilet. And that I love how these guys joke around with each other. Also, getting to see a bit more of Ian in this was awesome, especially because I think it's a really great way to whet our appetite for his book (as if mine needed any more whetting).
Read more
One person found this helpful
Helpful
Report abuse

Mel M
5.0 out of 5 stars Relationship Repair
Reviewed in the United States on October 7, 2018
Verified Purchase
Here's a laugh...imagine Ian Taggart as somone's faity godmother! Hysterical, right? Ian does step in as a relationship counselor of sorts, though when it becomes apparent that his club manager and Dom in Residence, Ryan and his bar manager, Jilluan, can't get past their stubbornness. Driven apart by circumstances 18 months ago they are now thrown together again when Jill shows up for a job interview at Sanctum. It takes a near tragedy and some not-so-subtle prodding by Ian to get them to see that there were mistakes on both sides of the relationship.
Read more
Helpful
Report abuse

Christine Jalili
5.0 out of 5 stars Loved it.
Reviewed in the United States on May 7, 2020
Verified Purchase
This is a great novella. I really love this series. I really felt for Jillian, Ryan really hurt her when he left her with his buddy. But now he’s her boss, can she forgive him? Will they get over their past? Loved how Taggart helped her realize she needed to open up with her feelings. Thankfully they get their happy ever after. I highly recommend this book.
Read more
Helpful
Report abuse
See all reviews

Kindle Customer
5.0 out of 5 stars A satisfying short story from Sanctum
Reviewed in the United Kingdom on May 1, 2020
Verified Purchase
A story of D/s romance and how two people overcome massive miscommunication and adversity to find their way through to HEA

Vikki McGuire
5.0 out of 5 stars Loved it!
Reviewed in the United Kingdom on January 3, 2021
Verified Purchase
Loved this little snippet of Ryan and Jillian and hope I get to see more of them throughout the series...
Read more
Report abuse

Fanny B
5.0 out of 5 stars Another hit for Lexi
Reviewed in the United Kingdom on October 27, 2017
Verified Purchase
This story of Ryan and Jill is an excellent addition to this series. Whilst it can be read as a stand alone book, I think it is probably best appreciated as part of the whole series. I loved this as much as all of the other books of Lexi Blake.
Read more
Report abuse
See all reviews

Tags that will help you discover similar books. 6 tags
in a seriescontemporaryromantic suspenseerotic romanceromancecontemporary romance
Results for:
Page 1 of 1Start overPage 1 of 1
Previous page
Next page
Where do clickable book tags come from?
Book tags are created from a variety of sources, some of which are customer-generated. Amazon is not legally responsible for the accuracy of the tags represented. If you are an author or publisher and would like to remove a tag associated with your title, please contact your vendor manager or publisher support team.
Back to top
Get to Know Us
Make Money with Us
Amazon Payment Products
Let Us Help You
EnglishChoose a language for shopping. United StatesChoose a country/region for shopping.
© 1996-2021, Amazon.com, Inc. or its affiliates