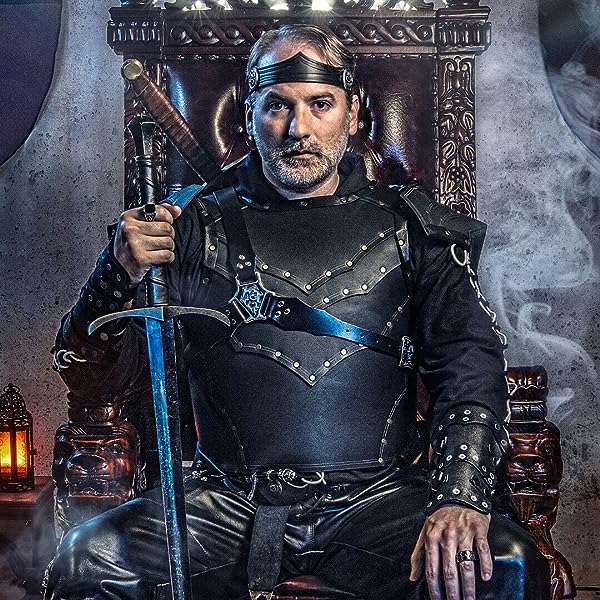 by Michael Wisehart (Author)
4.7 out of 5 stars 1,013 ratings
Book 4 of 5: Street Rats of Aramoor
See all formats and editions
Sorry, there was a problem loading this page. Try again.

A summons by the king turns Ayrion’s life upside down.

He’s being conscripted into the Lancer Corps . . . and it couldn’t have come at a worse time.

Just as Ayrion’s priorities are involuntarily split between the Elondrian Lancers and his tribe, Noph—the notably cunning chief of Sandstorm—calls for a secret meeting between himself and Hurricane. The outcome of that meeting forces Ayrion, Reevie, and Sapphire to make a decision that will not only affect their role within the tribes but will test the true strength of their friendship.

Whether they can survive the transition will hinge on which choice they make.

Bibliophile
5.0 out of 5 stars The Excitement Never Ceases.
Reviewed in the United States 🇺🇸 on January 21, 2023
Verified Purchase
Aryion continues to find himself in one difficult situation after another. And fortunately for us, Wisehart had decided to bring us along. Our beloved characters experience one adventure after another in this fevered pitch of excitement. Adventure, excitement, humor, characters to love and to hate, settings to thrill and wow. Wisehart delivers again.
The Street Rats series is one fun and enjoyable romp through the city of Aramoor.

Stan
4.0 out of 5 stars As great of a story as the others
Reviewed in the United States 🇺🇸 on December 23, 2022
Verified Purchase
The story transition of Ayrion from the time he was in the Lost City to now is amazing.

There was not as much excitement as the other books, which is understandable, but there was a lot more character building of Room 11, which I enjoyed.

The only thing that really got to me is that there was no need for the mass amount of description during Ayrion's practice drills.

Overall this story was as great as the other ones and even though I am one book away from ending this series, I am glad to be able to continue in this fantasy world with the continuation of the Aldoran Chronicals.
Read more
Helpful
Report abuse

Chester Hendrix
5.0 out of 5 stars The missing transition revealed... Well done, sir!
Reviewed in the United States 🇺🇸 on June 8, 2022
Verified Purchase
In all the prequels, the one transition we've all been curious about is - how does our hero transition from the leader of a street gang of ragtag orphans to The King's Man?

It comes in an unusual way, but one that unfolds naturally (and in a VERY entertaining fashion - a Michael Wisehart trademark). It takes a seasoned author to take a complicated political Gordian Knot and carefully unravel it without without ham-handed hatchet chopping, and Mr. Wisehart does not disappoint.

Quite the contrary - the author DELIGHTS in his efforts to entertain and deliver ANOTHER solid entry into this unfolding saga. The natural laying out of this amazing series is reminiscent of the resurgence of the Conan series in the '70's and '80's. Robert E. Howard's archetypal character lay dormant for nearly 40 years (Howard wrote the Conan stories in the pulp magazines of the '30's) until they exploded into the paperback world in the '60's, leading the charge of the Sword and Sorcery avalanche which continues to dominate popular fantasy.

After all Howard's tales were fully published, other authors started writing stories of the Cimmerian's long and storied history, filling in the blanks of obvious gaps in his life. Some of these were wonderful, some strained, many somewhere in between.

Mr. Wisenhart has had complete control of the entire history of his characters, and the result has been the slow unfolding of a masterpiece omnibus. It starts out with one of our primary characters - Ayrion - entering the stage as a fully formed character with a sketchy,largely undefined background...

That background has been revealed in depth BY THE AUTHOR - with a breathtaking amount of intimate details that excite and satisfy.

I've said it before and I'll say it again - Mr. Wisehart is slowly creating an epic fantasy series that will stand the test of time and rival the fantasy standards of the last century. If you aren't reading Wisehart now, you should be. You will NOT be disappointed!
Read more
Helpful
Report abuse

Romance reader today!action and suspense for everyone who reads. join the adventure. now you won't
5.0 out of 5 stars Absolutely loved it
Reviewed in the United States 🇺🇸 on November 6, 2022
Verified Purchase
I really like the way the Protector took care of his "family". I enjoyed the community atmosphere, the interactions between the orphans, the street rats, the aristocrats and most importantly the other groups. Well written, great flow and storyline. I wish I was there! Loved the action.
Read more
Helpful
Report abuse

Scott J. Liechty
5.0 out of 5 stars great story!
Reviewed in the United States 🇺🇸 on November 12, 2022
Verified Purchase
This whole series has been a very enjoyable read. I look forward to the next book, and hope the characters continue on, in this series or another!
Read more
Helpful
Report abuse

JMN4555
5.0 out of 5 stars Tremendous series, always intriguing and exciting!!!!
Reviewed in the United States 🇺🇸 on October 30, 2022
Verified Purchase
Congratulations to Michael Wisehart for this amazing series. It’s extremely hard to find such an interesting and exciting author who not only writes intelligently but also provides top rated plots, characters and excitement in the stories.
Read more
Helpful
Report abuse
See all reviews

Mrs. V. Mccarthy
5.0 out of 5 stars A brilliant read
Reviewed in the United Kingdom 🇬🇧 on September 13, 2022
Verified Purchase
I have now read all nine books in this series from the first to the last and I enjoyed every moment of it. I couldn't put the books down, especially in the fighting parts. It has gripped me throughout each one and is cleverly written building the story through each book. I highly recommend these books if like me you enjoy science fantasy.
Read more
Report abuse

Kerry Schumacher
5.0 out of 5 stars Great
Reviewed in the United Kingdom 🇬🇧 on January 11, 2022
Verified Purchase
Another well written book in one of my favorite series. Michael puts in the effort to develop characters that draw you in and puts in the effort to deliver a polished and enjoyable reading experience.
Read more
Report abuse

alistair samson
5.0 out of 5 stars good book
Reviewed in the United Kingdom 🇬🇧 on January 21, 2022
Verified Purchase
I’ve dipped in and out of this series reading 1 & 2 a good while ago coming back to 3 &4
Read more
Report abuse

Mary E Murphy
4.0 out of 5 stars Interesting characters great line of action I would love to see what happened next to them but did
Reviewed in the United Kingdom 🇬🇧 on February 4, 2022
Verified Purchase
not get my free book shackled which would have given me an idea of what happened after the events in sandstorm. Thank you I enjoyed the books they are very entertaining.
Read more
Report abuse

William Neil Draycott
5.0 out of 5 stars Excellent Book
Reviewed in the United Kingdom 🇬🇧 on February 27, 2022
Verified Purchase
Book 4 is by far the best