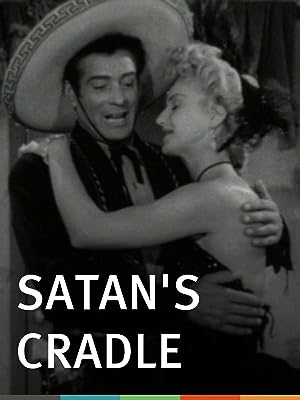 (3)
6.01h1949NR
In SATAN’S CRADLE, Cisco and Pancho decide to help a preacher "clean up" his town of Silver City, but first our heroes must take on the treacherous widow-woman and her murderous gang of henchman who have the town in their grip.

J. LovinsReviewed in the United States on December 18, 2005
5.0 out of 5 stars
"The King of B-Westerns & Serials...VCI Entertainment ~ Satan's Cradle (1948)"
VCI Entertainment presents "Duncan Renaldo:Cisco Kid Collection" (1945-1950) (Dolby digitally remastered)...here's adventure, here's romance, here's O'Henry's famous Robin Hood of the Old West...the Cisco Kid featuring Duncan Renaldo as Cisco and Leo Carrillo as his comical sidekick Pancho, in the first film Martin Garralaga plays Pancho...relive those thrilling days from the early '40s and '50s when romance and drama took us down the dusty trails and the plains to exciting adventures.

Storyline...first time appearance of Duncan Renaldo as the Cisco Kid with the kidnapping of a young girl who is the heir to money left by her murdered father...marriage and a beautiful senorita comes into the picture and Cisco is up to his old tricks of bringing the guilty party to justice...Cast includes Duncan Rnaldo (Cisco), Martin Garralaga (Pancho Gonzales), Roger Pryor (John Harris), Cecilia Callejo (Rosita Gonzales), Fritz Lieber (The Padre), Jan Wiley (Jeanette), Sharon Smith (Nancy Page), Vicky Lane (Julia, the fake Mrs. Page), Anthony Warde (Paul Conway), Bud Osborne (Sheriff)........special footnote, Bud Osborne (aka Lennie B Osborne) became one of the busiest supporting character actors in westerns of the '30s and '40s, altogether he appeared in more than 550 films, almost all of it in westerns as he handled the reins for horse drawn coaches and wagons from the early '20s through the late '50s.

Storyline:...a crime they didn't commit, Cisco Kid and Pancho are once again the prime suspects, the cavalry is on their heels and Cisco must prove himself innocent, they're mistaken by a U.S. Army patrol for members of a terrible Mexican gang. However, The Cisco Kid has learned they're not Mexicans at all, but Americanos in disguise...Cast includes Duncan Renaldo (Cisco), Leo Carrillo (Pancho), Armida (Rosita), Joe Sawyer (Sergeant McNulty), Clayon Moore (Lieutenant), Kenneth MacDonald (Brack)...special footnote, actor Clayton Moore appears without his Lone Ranger ma

Storyline...has Cisco and Pancho helping Preacher Lane after he is beaten and left on the desert...has the crooked lawyer Steve Gentry and Lil got a strangled hold on Silver City...is the marriage certificate between Jim Mason and Lil on the up and jup to control Mason land...is Lil beginning to fall for Cisco and move down the path of truth and justice...does Gentry have other plans for Cisco as he explores the Silver mines...highlights of this film has Pancho twisting the English language with hysterical moments at every turn....Cast includes Duncan Renaldo (The Cisco Kid), Leo Carrillo (Pancho), Ann Savage (Lil), Douglas Fowley (Steve Gentry), Bryon Foulger (Preacher Lane), Claire Carleton (Belle), Buck Bailey (Rocky), George DeNormand ( Idaho), Wes Hudman (Peters)

Storyline...has Cisco and Pancho trying to help a small boy prove his fathers innocence...is the Mayor who knew Cisco before going to take over the town...who will break first and tell the truth about the stolen money with serials numbers recorded...

Pedro de Cordoba (Padre), Alden "Stephen" Chase (Brady ), Edmund Cobb (Marshal Scott), David Leonard (Pappy Del Rio), Frank Jaquet (Judge Perkins)........special footnote the sheriff also bad guy is none other than one of our favorite B-Western character actors Edmund Cobb, who appeared in over 200 films and most of them westerns...check out Pancho's mispronouncing the English language, it's completely side splitting...this was another exciting feature film before their successful "The Cisco Kid" 1950-1956 television series.

Storyline...this time we have Cisco and Pancho being blamed for a series of stagecoach holdups...who is impersonating the duo and will they be discovered and brought to justice...check out Pancho's mispronouncing the English language, it is a riot...Cast includes Duncan Renaldo (The Cisco Kid), Leo Carrillo (Pancho), Jane Adams (Nora Malloy), Edmund Cobb (The Phoney Pancho), David Sharpe (The Phoney Cisco), Leonard Penn (Tom McCarger), William Lester (Jerry Todd ), Byron Foulger (Ross, station agent), Don C. Harvey (Kansas, a thug), Lee Phelps (Sheriff Marlowe)........special footnote, this is the last feature film before their successful "The Cisco Kid" 1950-1956 TV series.

1. Very informative and enlightening interview tracing Duncan Renaldo's career of how he came to play "The Cisco Kid" plus behind the scenes with Leo Carrillo and various trailers.

2. In 1980, Renaldo received a Special Lifetime Achievement Award from Nosotros, which honored him for "providing a postive Hispanic role model for Americans"...and what's more states "The Cisco Kid" a perennial television favorite.

Great job by VCI Entertainment for releasing "Duncan Renaldo:Cisco Kid Collection" (1945-1950), the digital transfere with a clean, clear and crisp print...looking forward to more of the same from the '40s and '50s vintage...order your copy now from Amazon or VCI Entertainment, stay tuned once again with a top notch B-Westerns from VCI...so saddle up and get ready for some hard riding and adventure that only The Cisco Kid and Pancho can deliver...just the way we like 'em!