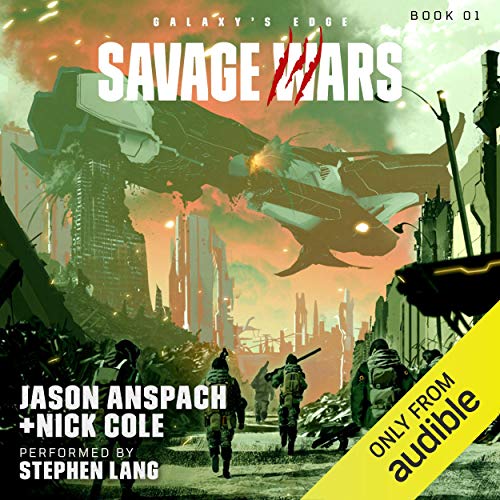 List Price: $34.95
You Save: $4.96 (14%)
By completing your purchase, you agree to Audible’s Conditions Of Use
Sold and delivered by Audible, an Amazon company
Share

4.6 out of 5 stars
4.6 out of 5
408 global ratings
How are ratings calculated?
To calculate the overall star rating and percentage breakdown by star, we don’t use a simple average. Instead, our system considers things like how recent a review is and if the reviewer bought the item on Amazon. It also analyzes reviews to verify trustworthiness.
Top reviews

Jeff Henneforth
5.0 out of 5 stars Tyrus is Back!
Reviewed in the United States on February 28, 2020
Verified Purchase
This new season of Galaxy’s Edge goes back to a time before the Legion. Questions are answered. Origins are revealed. It’s gritty, battle fighting from beginning to end. Fans of the series won’t want to miss it. Those new to the series could start here, but I’d recommend starting at with Legionnaire. The first part of this one can be a little daunting as it deals with a lot of battle tactics and less on characterization. But the payoff in the second half is worth it.
Read more
16 people found this helpful
Helpful
Report abuse

Jason Anspach and Nick Cole take us back to the beginning of the Legion. To those desperate battles that rent the galaxy in twain, yet at the same time also called forth humanity’s greatest heroes. And it is very much humanity versus… something else. While the denizens of the lighthuggers that left Earth before the invention of the hyperdrive do share common ancestry with the varied multitudes that inhabit the far-flung worlds of the galaxy, being a homo sapiens isn’t necessarily the same thing as being human.

Exactly what humanity entails of you is the living core of this book of military space opera with a very hard look at the horrors of war. War, as such, is horrible. This war, is something else entirely, and if you want to know why, you should take a short detour into the universal phenomenon known as millennialism.

The name for it in English implies a particularity it does not possess. The name comes from the Book of Revelation, referring to the an age of 1,000 years in which Christ rules the Earth. That meaning has been extended to refer to all movements that believe that the end of the world, or the end of an age of the world is imminent, and that therefore radical changes are called for with special urgency.

When the lighthuggers, giant colony ships with the capacity to achieve an ultimate velocity a substantial fraction of lightspeed, abandoned the dying Earth, that seemed abundantly true. An age of the world really was ending, and people responded accordingly. What was different here, is that in our history millenarian movements have always needed to physically co-exist with everyone else. The precursors of the Savages took the equivalent of a commune, a kibbutz, or a cult, and separated it from the rest of humanity for generations, at least.

If you want to know how nutty millenarian movements can get, here are a few real examples. The Skoptsys. The Cattle Killing of the Xhosa. The Taiping Rebellion. The Münster Commune. There is a tendency for such things to get to the point of self-destruction, like the Jonestown Massacre, but there is also the reaction of the rest of society to such things, illustrated by the Taiping Rebellion or the Münster Commune, which were crushed with alacrity.

The Savages are the survivors of a Darwinian process that eliminated those who self-destructed, and protected the dangerous ones, who had an opportunity to consolidate their power completely free from outside interference that might have ended their menace when they were weak. Thus, when the monsters come roaring out of the depths of space on their massive ships, those ships contain every horror mankind has ever feared, dialed up to eleven. Their ideologies swollen to madness, in their isolation, and powered by the wonders produced by the best minds of Earth, unmoored from restraints.

Against these post-human hordes, only one response is possible. WARRE. War to the knife, nuclear weapons, fire, and destruction. Or is it? Thus we return to the question I posed at the beginning? What does our humanity require of us in this situation? The Savages deliberately left their humanity behind, seeing it as weak and broken. For them, the question has been definitely answered.

For the Savages distant cousins who leapt to the stars ahead of them, this is the question that will determine who they will be. Do you need to become a monster, in order to fight them? Can you lose by winning? And at the heart of this question is also a relationship, between two men who understand each other as no one else possibly could.

In many ways, they are utterly different. One is a warrior. The other a magician. Their personalities and habits of mind are opposed, but also complementary, rather than contradictory. Or at least it is possible for them to be so. Coming to agreement for such stubborn and willful men cannot be easy. Which is why the ultimate resolution requires the intermediation of a woman. And from that, great things shall come.

That Anspach and Cole can manage to combine such subtlety with great action in an expansive universe that feels like home will never cease to amaze me.
Read more
11 people found this helpful
Helpful
Report abuse

John L. Tuttle
5.0 out of 5 stars The Wild Man!
Reviewed in the United States on March 28, 2020
Verified Purchase
The military action is top notch. The characters are even better. The authors really know the military, the way they talk, the way they operate. I can say that because I'm prior military . The Galaxy's Edge series is known for its fantastic characters. (The fans plead with the authors not to kill off their personal favorites.) This book has one of the all-time best: the Wild Man. Physically and emotionally scared, he travels from one Savage outbreak to the next, just for the opportunity to kill Savages with his massive slug-throwing sniper rifle, all for the love of the woman he could not be there to protect. "Do another one, Babe." "Yes, ma'am."
Read more
8 people found this helpful
Helpful
Report abuse

Christopher DiNote
5.0 out of 5 stars Powerful and Tragic
Reviewed in the United States on July 3, 2020
Verified Purchase
This may very well be the best of the GE novels so far, in a series with an overall excellent track record for quality and thoughtfulness. Savage Wars features the best written action scenes I can remember reading since early Tom Clancy at least, and they gave that same "authentic" vibe especially as they follow the ordinary soldiers of the Galaxy.

If that's all SW had to offer, it would be a very good book. However, the way it delves into the horrors and costs of war, the underlying tensions of just war theory, even if it's not called out by its formal name, raise it to another level. Spoiler-free, the debate over the actions of Tyrus Rechs, and what constitutes jus ad hello and jus in hello, are crucial to this book, and this phase of the story. If you've heard critics say that GE "glorifies war," or is "nothing but action," this entry should put those criticisms to bed once and for all. If you've heard that it espouses an Utilitarian "ends justify the means" POV, then it's coming from someone who hasn't read the series, and especially this book. Yes the action is adrenaline pumping. Come for that, but stay for something much, much deeper, and full of tears.
Read more
4 people found this helpful
Helpful
Report abuse

DisasterDude
1.0 out of 5 stars Not Like His Previous Works
Reviewed in the United States on April 22, 2020
Verified Purchase
This book was terrible. Written from the perspective of a human living inside the computer game that is the SAVAGE army it has no discernible plot, almost no dialogue, and seems composed primarily of juvenile ramblings. I gave up trying to make sense of it. I feel cheated out of the money I spent. Even worse, I pre-purchased Book 2 at the same time and I'm dreading even looking at it for fear it will be more of the same drivel. I don't know what prompted the author to take such a flying leap from the story-line that worked so well but I think that he has fallen flat with this effort.
Read more
5 people found this helpful
Helpful
Report abuse

AlbertV
5.0 out of 5 stars Another amazing story!
Reviewed in the United States on March 5, 2020
Verified Purchase
I’m catching up as quickly as I can, to all of these wonderful stories! This one reveals the beginning of a legend, full of every emotion that you can imagine. Hard won fights, new partnerships and friends, unlikely alliance’s and the beginning of an all out fight for survival. Many thanks to the authors! KTF!
Read more
6 people found this helpful
Helpful
Report abuse
See all reviews

JOSEPH GARCIA
5.0 out of 5 stars High energy and breathless action from cover to cover.
Reviewed in the United Kingdom on April 19, 2020
Verified Purchase
Those of you that follow Galaxy’s Edge books will know that this is the prequel of the series. The Savages have long been tantalisingly hinted about in the series and now we can finally see what happened. As much as I liked the Galaxy’s edge books I have to say this book blows all previous ones away! It is a high energy stand up fight over a premier world in the coalition that is invaded by the Savages. The book is a breathless, all action war between the two sides from start to finish. I found it impossible to put down and read it cover to cover in two readings. Highly recommended.
Read more
Report abuse

doggyman
5.0 out of 5 stars An all action read, superb.
Reviewed in the United Kingdom on March 21, 2020
Verified Purchase
Oh boy, didn't know what to expect when I started this but what a read non-stop action right up to the end then couldn't wait to click for next in series. What a let down to see it is pre order now can't wait for 31st March.
Read more
Report abuse

Shaun Porter
5.0 out of 5 stars Great Book
Reviewed in the United Kingdom on December 16, 2020
Verified Purchase
This set of books explains so much about he Galaxy Edge world, a very good place to start before reading older books that are set later in the time line of this galaxy.
Read more
Report abuse

Barry H.
5.0 out of 5 stars Couldn’t put it down !
Reviewed in the United Kingdom on June 2, 2020
Verified Purchase
Another slice of the Galaxies Edge universe - really sets the scene and character back stories just loved it - solid characters, action filled and great story line - just how military sci fi should be !
Read more
Report abuse