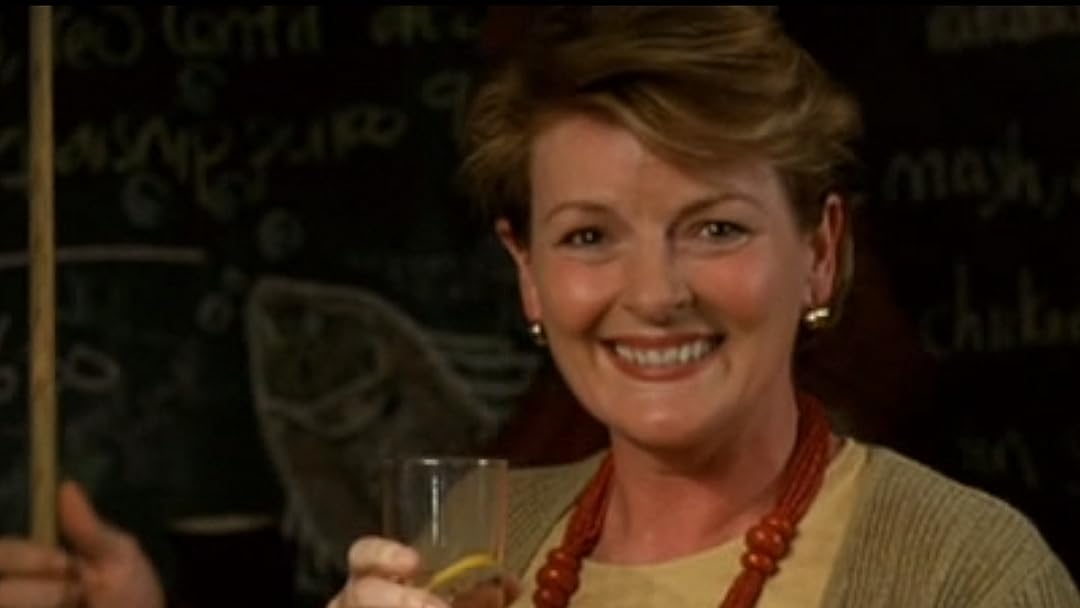 (3,326)6.91 h 34 min2008R
Grace, a small-town English widow, discovers after her husband's suicide that he has squandered all their money and left her bankrupt -- and the banks are ready to reposes everything.

lisaleo (Lisa Yount)Reviewed in the United States on November 13, 2017
4.0 out of 5 stars
slightly silly story, wonderful characters and acting
Verified purchase
I saw this movie (made in 2000) on DVD recently on the advice of a friend who has a knack for finding stories that don’t sound like much plotwise but turn out to have wonderful characters. Saving Grace perfectly fits that description.

Middle-aged Grace Trevethyn has a beautiful house above a fishing village in Cornwall (lovely scenery), but she becomes in danger of losing it when her husband dies and leaves her with a mountain of debt from bad investments that she didn’t know about. She sees a possible way out of her dilemma when her young gardener and friend, Matthew, lets her in on the secret that he’s raising a small marijuana crop (still illegal in those days). Matthew isn’t a very good gardener, but Grace is, and when Matthew tells her that a larger crop could be worth a lot of money, she goes all in. Humor arises from the idea of a middle-aged, upper-class woman trying to deal with the London drug culture and, later, from the inevitable giggly effects of the weed, mostly consumed unintentionally by a variety of characters.

The main reason for bothering with this film is the outstanding performance of Brenda Blethyn as Grace (though Craig Ferguson as Matthew is also good). She becomes both funny and endearing. Although not particularly a fan of (or even familiar with) “stoner” movies, I found the post-pot antics great fun, too. (The climactic scene bears a strong resemblance to the finale of Pirates of Penzance.) I agree with one of the other reviewers that the ending is distinctly implausible, but by then I was too fond of the characters and laughing too hard to care. I definitely recommend this lost little gem to anyone who wants an hour or two of fun—whether you’re stoned (or even like marijuana) or not.

KayReviewed in the United States on February 11, 2018
4.0 out of 5 stars
Good Fun!
Verified purchase
Funny, superb acting. Love Brenda Blethyn! The script is a little implausible but not totally. I am what many both negatively and positively call an Anglophile. Don't really know as I am not really moved by labels but love a lot of things British, some like TV because they are funny & good, others like all the aristocracy ish, love of American-bashing, etc, because it is among other things pretty intriguing. This would not work as an American film. All that being said, this is just fun, funny and easy to watch. I would also recommend viewing other Brenda Blethyn work as she is so versatile. She does comedy well, brings humor to more slightly "serious" roles such as the mother in "Pride and Prejudice" and "Little Voice", as well as serious drama like " Secrets a& Lies". And of course there is "Vera" which is simply awesome.
15 people found this helpful

Loves2ReadReviewed in the United States on June 10, 2018
5.0 out of 5 stars
Enjoyable comedy
Verified purchase
Bought this after searching and not finding it on any streaming channel I have access to for free...I have seen it on cable before but not recently. I enjoy it...Love Blethyn and this role allows her to be more feminine than her Vera one...Her ability to cross the gamut from comedy to drama happens a few times...she is such a good actress. I wish she did more...
Craig Ferguson is good and there are other familar faces as well from British comedy...
And ironic as well to see how time has proven her talents as a gardener could be in high demand in state like Colorado now...
9 people found this helpful

JSHReviewed in the United States on June 19, 2021
5.0 out of 5 stars
Inspired TV series Doc Martin
Verified purchase
Fun movie in that genre of people behaving badly - comedy. Craig Ferguson successfully competes with Cheech and Chong with his version of a feckless pot head. What interested me was that I loved the TV series Doc Martin. This movie inspired that series. Martin Clunes is the doc in this small coastal village in Cornwall England in the movie. That character is developed further (and greatly modified) for the series. Both series and movie are filmed in the same location. I enjoyed the series more than the movie, but I enjoyed the movie more because of the series.
One person found this helpful

Leonard JamesReviewed in the United States on October 14, 2014
5.0 out of 5 stars
Terrific, terrific!
Verified purchase
One of the most wonderful buddy movies ever...and the whole town gets baked! I never tire of seeing it and I have owned it since it was available. I still find that even when it is on commercial TV or cable, I watch it again and again. I really got to enjoy these people and the relationships that develop. It is two good people helping each other out when things get difficult, and as the movie moves along, we learn that the whole town is a loving community of odd and funny characters. If I am not being helpful to you it is because this is a delightful film of surprises and I don't want to give away too much. I will just say that Craig Ferguson wrote a great script, someone made a good choice of casting some wonderful actors who create a great sense of community in this small English town. That I know of, Ferguson has written two movies, both of which I have enjoyed, but this one is really special and, for me, has withstood the test of time.
11 people found this helpful

Book LadyReviewed in the United States on June 10, 2021
5.0 out of 5 stars
A fun summer movie!
Verified purchase
This is a great summer movie for the beach when it rains and you are stuck inside. Craig Ferguson and "Doc Martin" are fun in this movie about a widow who finds a way to get out of debt and build a new life for herself. While the movie is definitely fantasy, it is fun to watch. A happy ending, but something of a surprise.

AtheenReviewed in the United States on March 22, 2002
5.0 out of 5 stars
Thoroughly enjoyable and light hearted
Verified purchase
We got to discussing favorite movies at work recently, and Vicki, one of the nurses I work with in the recovery room, said she'd seen Saving Grace and had really loved it. She gave me a short recap of the film, and I decided it was worth a couple of hours of time and bought it. Normally I'm the type of movie goer who labors ad infinitum over the implications of each character's actions, and certainly the underlying drug theme might well have brought out that tendency with a vengeance, but in viewing Saving Grace, I was so beguiled by the charm of the village and it's delightful residents that I was able to suspend criticality and just enjoy my "visit."
The venue of the story is a colorful coastal village in England. Though a little bleak, the surrounding country side is open and green, with wonderful vistas of the sea, and the village is a cluster of quaint, old, stone buildings along narrow, little streets. The title character, Grace, is the lady of the local manor and presides graciously over the social activities of her neighborhood. Her home is a gorgeous vine covered house in the midst of well kept grounds, a home she loves and which she is unknowingly about to lose due to the capricious financial habits of her philandering and recently deceased spouse. The story turns on Grace's outrageous plans to save her home and the naivety with which she pursues them, assisted or at least abetted by an assortment of delightful neighbors including her gardener, her doctor and even her husband's former mistress.
Grace is played with great skill by Brenda Blethyn. She's pretty and perky and just at "that age" where a women who had been financially independent for most of her life might find it difficult to start anew. Even as she starts on her "life of crime"-"I'm going to be a drugs dealer!"--one can't help but cheer her on for her audacity, just as most of her neighbors come to do. Beset by collection notices with every post, the intrusion of an assessor who arrives as her door to evaluate her house for auction, and phone calls from a persistent London creditor, Grace takes the bull by the horns and bursts-or more properly blunders--onto the drug scene. Craig Ferguson as her Scottish gardener Matthew, is the perfect instigator, naive enough himself to be funny but opportunist enough to see their approach to saving the manor as viable.
Even though my husband and I are frequently at odds with respect to our film preferences, we both enjoyed this movie. It was a thoroughly enjoyable and light hearted way to spend an evening.
33 people found this helpful
See all reviews
Back to top
Get to Know Us
Make Money with Us
Amazon Payment Products
Let Us Help You
EnglishChoose a language for shopping. United StatesChoose a country/region for shopping.
© 1996-2021, Amazon.com, Inc. or its affiliates