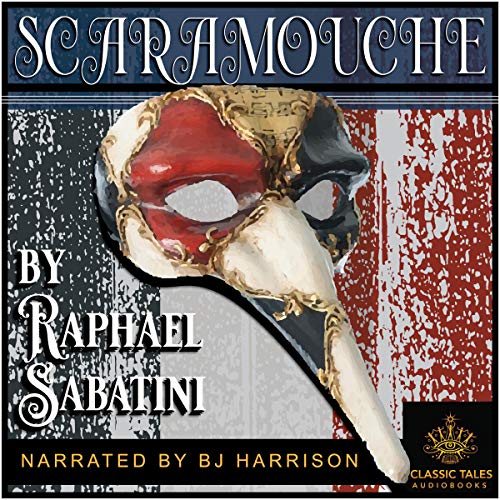 Raphael Sabatini (Author), B. J. Harrison (Narrator, Publisher)
4.4 out of 5 stars 3 ratings
See all formats and editions
Sorry, there was a problem loading this page. Try again.

Once he was Andre-Louis, lawyer to the upper class, and destined for the upper echelons of French society.

Now, he is Scaramouche. Speaking out against the injustices of the French government, he dons the garb of a clown with a band of wandering actors - a passionate jester with a vital message....

Set during the French Revolution, Scaramouche is a swashbuckling romance as well as a thought-provoking commentary about systemic injustice.

Special invitation from Audible!
Learn more about Membership
List Price: $9.79
You Save: $1.22 (12%)
By completing your purchase, you agree to Audible’s Conditions Of Use
Sold and delivered by Audible, an Amazon company
Share

4.4 out of 5 stars
4.4 out of 5
3 global ratings
How are ratings calculated?
To calculate the overall star rating and percentage breakdown by star, we don’t use a simple average. Instead, our system considers things like how recent a review is and if the reviewer bought the item on Amazon. It also analyzes reviews to verify trustworthiness.