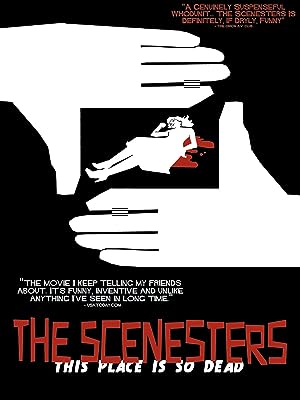 (25)
5.51 h 41 min2009R
In this dark comedy, when a serial killer starts picking off beautiful young hipsters on the east side of Los Angeles, a group of crime scene videographers hatch a plan to catch him.

RedReviewed in the United States on May 20, 2015
5.0 out of 5 stars
hidden gem
Verified purchase
Excellent film, I loved this film from start to finish.
Highly recommended if you like good films, reminded me of behind the mask of Leslie Vernon.
Lots of references to film makers which I enjoyed and although not a comedy(perhaps dark humour) it is witty and had me laughing at the clever way in which the scenes where cut.
I scanned imdb in hopes to find more films by Todd Berger but found myself disappointed, he has however done a bunch of shorts which I will now binge watch. I look forward to his next film. This guy will be a big name.

FiReviewed in the United States on August 4, 2015
4.0 out of 5 stars
it wasn't at all what i was expecting (which wasn't much) but it pleasantly suprised me!
Verified purchase
I'll be honest, i didn't expect to like this, but i really did. It does what a lot of Indie movies fail to do, make do with what the have. The acting was decent, the story was pretty great, the only reason i don't find it a five star is because of the slightly predictable ending and the amount of attention given to the director (which is fine, it just off-balanced itself a bit) and another thing but i don't want to spoil anything.

It's a pretty great story of a director who needs to get a job that pays more, so he does crime scene filming. His buddy who works with him as his "producer" wants him to try and make a name for himself in crime scene footage. During the movie it flashes to a courtroom where they are clearly on trial for something we aren't quite sure of for the first bit of the movie. They meet a crime scene cleaner who seems to notice more than the cops investigating the crime. It's far more humorous and interesting than i'm describing.
Since it is free on prime right now, it's worth a watch, i wouldn't pay the rental fee, unless you watch the trailer and think it's up your alley. I again have to say this is a wonderful example of what can be achieved when you enjoy what you do, because it really shows, everyone acted well, the shots were set up well, the writing, the directing.

Valued CustomerReviewed in the United States on July 23, 2020
2.0 out of 5 stars
Fun music, not much else going for it.
Verified purchase
Worth it for the music and LA scenery but not much else. Carried the self-aware in-jokes way too far.

crosscountrymanReviewed in the United States on September 30, 2015
5.0 out of 5 stars
Great Indie Film
Verified purchase
For an Indie production this is one of the best overall I have seen. One actor reminds me of Dwight Yoakum and he has the flair for acting. Well done to everybody. Amazing and I would pay to see this in a theatre; like an Art Theatre that gives space and time to Indie films. I'll be watching for others with this teaM!

Chad NicholsReviewed in the United States on March 6, 2013
5.0 out of 5 stars
Incredibly ambitious low-budget feature that pulls it off.
Verified purchase
This film is a lot of things, but one thing it's not is boring. Equal parts noir-style mystery, psychological thriller, stalker/slasher film, found footage film, courtroom drama, meta-cinema, and faux documentary, all over a denominator of black comedy, The Scenesters holds together incredibly well. It's often hilarious, with a deadpan sensibility that's admirable coming from a group with an improv comedy background. The script manages to pull off a lot of nice surprises and misleads. The film does a great job of using the tools of its different genres in the service of making a comic commentary on them. Definitely a welcome surprise. If you like this, check out the group's latest film, It's a Disaster, coming soon to theaters and VOD. They're both a step above the mainstream comedies we're seeing today.
One person found this helpful

Grandma 420/710Reviewed in the United States on December 29, 2017
3.0 out of 5 stars
Interesting
Verified purchase
I thought this was entertaining.

AMooreReviewed in the United States on October 3, 2015
5.0 out of 5 stars
Five Stars
Verified purchase
Absolutely love this movie. Runaway hit at the Phx Film Festival.
See all reviews
Back to top
Get to Know Us
Make Money with Us
Amazon Payment Products
Let Us Help You
EnglishChoose a language for shopping. United StatesChoose a country/region for shopping.
© 1996-2022, Amazon.com, Inc. or its affiliates