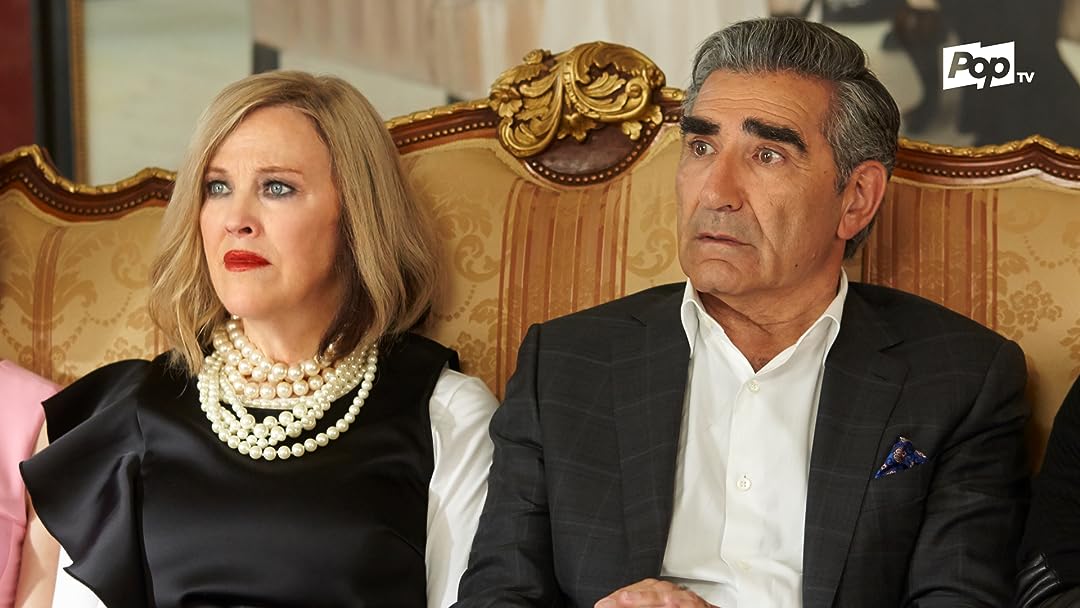 (7,621)
8.52015X-RayTV-14
When filthy-rich Johnny Rose (Eugene Levy), his wife Moira (Catherine O’Hara), and their two kids- son David (Daniel Levy) and daughter Alexis (Annie Murphy) - suddenly find themselves broke, they are forced to live in a town they once bought as a joke.

DrDuckButtReviewed in the United States on February 21, 2016
5.0 out of 5 stars
Loved it. Seemingly Horrible people you will fall in love with.
Verified purchase
Loved it. Seemingly Horrible people you will fall in love with. Hilarious moments, touching moments, and a constant vein of subtle humor running throughout.. They take the characters over the top at times, but always dial them back into human beings that you start caring about. The performances are fantastic. Catherine O'Hara and Eugene Levy are perfection of course, but Dan Levy is an awesome surprise for me. Of the 4 family members, his performance seems to be more real and less of a caricature. I have not seen him in anything else and did not know of his existence until watching this show. The towns folk provide a rich canvas of talent that add even more to the experience . With a show like this, there is usually a couple of characters that annoy me.That was not the case here. Even the mayor, (Chris Elliot at his best) grows on you, despite being creepy, controlling, and having a complete lack of boundaries. If I had to classify this show, it is a mix of Arrested Development, Northern Exposure, with a hint of Curb your Enthusiasm a dash of Christopher Guest movie extract; but while having elements and similar themes of those shows, still finds its own unique voice.
105 people found this helpful

KitKatsMommyReviewed in the United States on February 25, 2016
5.0 out of 5 stars
Why does Canada get ALL the best shows? MUST WATCH Laugh out Loud, Brilliant Writing and Marvelous Cast.
Verified purchase
Purely brilliant. Very amusing, entertaining and totally laugh out loud. Why are all the really good shows Canadian or British? I just binge watched it and I want more!! Where is season 2?

The writing was brilliant, Dan Levy nails today's entitled culture and the possibility of rehabilitation. I love the entire cast, Eugene Levy was brilliant and Catherine O'Hara is ALWAYS divine, she had hints of her Beetlejuice character in here. I love her frantic Mom moments. Stevie, Alexis, Twyla, Mutt, all the characters are brilliant.

And Elliot brings some of the joy de vie he had on Letterman in the long ago days. Thanks Amazon Prime for bringing this to us.

Julissa GonzalezReviewed in the United States on November 7, 2016
5.0 out of 5 stars
ABSOLUTELY HILARIOUS, BRILLIANT, DRY AND CLEVERLY DONE
Verified purchase
I love this show so much and I'm so happy that its available in the U.S. I think its absolutely hilarious, brilliant, dry and cleverly done. I thoroughly enjoy the chemistry between all the characters and whoever casted this show is a total genius. I was so excited when the second season came out. I'm the type that has a hard time laughing at movies/shows when everyone else thinks their funny and there are very few sitcoms that have made me laugh outloud in histerics, such as Arrested Development, Portlandia, Modern Family and now Schitts Creek. If you take yourself too seriously and only you consider yourself an elitist or an intellectual snob (operative words being "only you consider yourself") then this show is not for you. I noticed that most of the negative comments about the show were very angry, hostile and almost personal. It makes me wonder if there is an ulterior motive in their opinions. I say to those angry people, "RELAX AND BE HAPPY!! IF YOU DON'T LIKE IT, DON'T WATCH IT." BTW, CANADIANS ARE THE BEST EVERRRRR!!!!!! FYI, I'm an American. Don't hate or discriminate :)
16 people found this helpful

Pax DeoReviewed in the United States on January 28, 2017
5.0 out of 5 stars
Hilarious and endearing.
Verified purchase
Absolutely loved it. Eugene Levy and Catherine O'Hara have been comedic gold for years. Now with Schitt's Creek, we're treated to a series of 20-minute gems about a formerly filthy-rich family who finds itself living in two second-rate motel rooms in Schitt's Creek - a town Dad once bought for his son apparently metro-sexual son David (real-life son Daniel Levy) as a joke. Daughter Alexis (Annie Murphy) still has to work off her community service (party drug bust) in their new home town, which she does in platform stilettos and sparkly hair bands.

As the family interacts with the locals including Mayor Roland Schitt (Chris Elliott) and motel clerk/manager/maid Stevie (Emily Hampshire), wild and improbable relationships develop and we never quite know what's next. Every character is perfect, but David is my favorite. I would kill a bug with a milky exoskeleton for him any day.
16 people found this helpful

WayneReviewed in the United States on January 28, 2017
5.0 out of 5 stars
VERY VERY FUNNY - They just released season 3 in January 2017
Verified purchase
This show is hilarious. Thank goodness there is no laugh track because you'd miss too many of the subtle jokes. This ensemble group works so well together. My wife and I have binged watch the first 2 seasons and now will see season 3 on the POP channel - one I had never heard of before. As always, Chris Elliott (Roland Schitt - town mayor) is as funny as can be with his understated humor. My wife suspects that they actors are always fighting off falling into hysterics with each other. This show has won all kinds of awards from our friends in Canada and rightly so. The premise is that Eugene Levy's character bought the town as a joke and gave it to his son because he was filthy rich. Now all the riches are gone, thanks to the feds, but they let them keep the town because they see it as worthless. They live in a dive motel now and have to figure out how real people do things. I would have to say that every character brings something to the show but Levy's family, the Roses, let everything pivot around them. And I mean that in a good way if I'm not expressing this correctly. Enjoy!
11 people found this helpful

Patrick L JamesReviewed in the United States on September 25, 2017
5.0 out of 5 stars
The Beverly hillbillies in reverse! This family is like my spirit animal as a group 5 stars season one
Verified purchase
But this family is like my spirit animal. I swear to God. Lol they are so horrible and endearing. That you don't know whether to be disgusted by them love them or both. My favorite 2 characters are the mother and the son, and they really like the father too. But the mother and son are so deluded. They make the show funny. The actress that played the mother had to have based her character somewhat off of Janice Dickinson, that is all I see when I see her playing. Mrs. rose. Is this loud? Still attractive but drugged up has been actress that would any time she walks into the room, she should be the one everyone is looking at whether she's making a scene or she's the life of the room. Considering or not living the high life anymore when you watched the show even if you haven't seen the show you know that it's basically the Beverly Hill billies in reverse. I like the daughter, the daughter's character it is the only one that seemed to adapt well to the poor life. And seems to semi enjoy. Her new surroundings, along with her father or at least, seems to make the best of it. Though she's pretty much what I would have pegged her for right away, the spoiled, rich princess that's very promiscuous, loud party girl tie that maybe they could have wrote differently, I don't know, but I do find her in endearing on the show. The son who also is the sun to Eugene Levy actor Dan Levy is very funny, very vapid. The self of are just like the rest of the van away. If I haven't I. Caught on to it yet? They pretty much make him as gay. As possible is not a gay character, then. Somebody can call me out on my review, but my reviews, FYI, are usually in the top debris, most helpful and critical reviews on anything I've rated on Amazon. So back to what I was saying, they do make him very flamboyant than make him some observed they make him very stupid at times. That little things like being a bag boy slash cashier at a grocery store will pay 45 dollars an hour. I think even the average wealthy person knows you are not going to get paid 45 dollars an hour to be a bag boy at a supermarket. So I thought that part of the show was a little unrealistic. He is very funny. He does a good job at what he plays and I did like him in other movies, I've seen him in lake admission with Tina fey and I really like his stand up special.

Overall. I think season one is very funny I started. The earlier this afternoon probably took a 2 hour break here and there to you know, eat and do all their things, but I've only got 3 episodes left at 13 and I plan to finish them tonight before I go to bed so it is a very good show. Extremely funny worth the 5 star rating I'm just nit picky when it comes to reviews because people do not go in detail on anything and I think you can do a review go in detail on something without giving away any spoilers like I just did.
4 people found this helpful

Pamela CorsonReviewed in the United States on February 2, 2016
5.0 out of 5 stars
FUNNIEST SHOW ON PRIME!!!!!!!!
Verified purchase
This is, by far, one of the most hilarious shows that I've seen in years!!! This show actually made me LAUGH!!! I Rarely find anything funny enough to even smile at, let alone laugh until my guts hurt!! The first episode was a bit blah, BUT the next 12 were awesome!!!!! The acting, writing, and jokes are brilliant!! Amazon, HURRY UP & get us the next season!!! I can't wait much longer!!! This is an absolute MUST SEE SHOW!!!! Love it!!!
50 people found this helpful
See all reviews
Back to top
Get to Know Us
Make Money with Us
Amazon Payment Products
Let Us Help You
EnglishChoose a language for shopping. United StatesChoose a country/region for shopping.
© 1996-2022, Amazon.com, Inc. or its affiliates