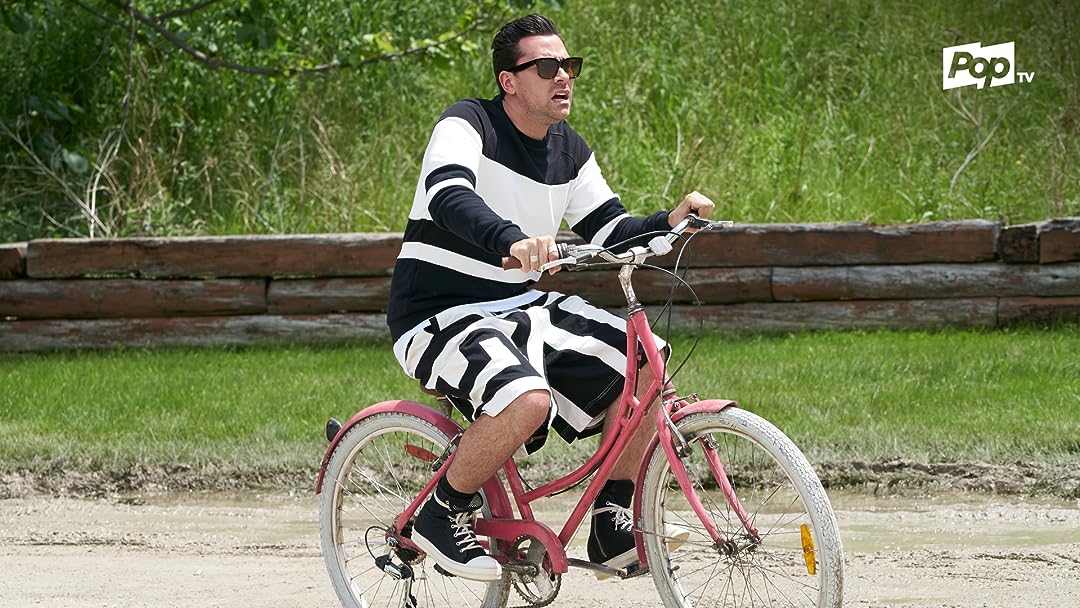 JumprunnerReviewed in the United States on May 7, 2020
4.0 out of 5 stars
Schitt's Creek is hilarious and deserves 5 stars but Amazon deserves no stars this time.
Verified purchase
Great series but I was charged for the season when I get it for free. I guess I had to very carefully hit the icon for the free with ads version. I did not do that in the past so I was very surprised when I saw the $11.59 bill. Then it is highly difficult to protest the charge- that is why I ended up having to try to communicate my issue to Amazon thru a review. Warning- be careful to set up parental controls or set up a pin that you have to put in before any charge is made. If you don't do that (lets see how difficult Amazon makes it to set up that pin) most people will eventually get charged for some items they click on accidentally or versions of items they never realized were not included in Amazon Prime for free.
3 people found this helpful

Happy GalReviewed in the United States on June 3, 2016
5.0 out of 5 stars
Anyone with a Sense of Humor Will Love Schitt's Creek!
Verified purchase
I just finished episode 13 of season two, and I am convinced this is one of the best situation comedies available online! The whole cast is hilarious yet convincing. I keep forgetting that these are actors, and this isn't a reality television show.
The scenario is enough to make any potential viewer want to watch: An extremely wealthy family is cheated by their accountant and left with nothing but their clothes and the scruffy little town they purchased years before as a JOKE (Schitt's Creek). As someone who grew up in a small town like Schitt's Creek, I have always been fascinated by the idea of our town playing host to a worldly, well-financed family. (What would they order at our restaurants? What would they say at our community events?)
Eugene and Daniel are excellent actors, and Catherine O'Hara is perfect for this role! (For kicks I sometimes imitate her in conversations.) Annie Murphy's spoiled and clueless character, Alexis, is sometimes hard to watch, but Murphy does a superb job portraying her. She grins and tosses her head when she's making a point, and it is so funny to watch.
The constantly sarcastic interactions between Stevie (Emily Hampshire) and David are priceless. To contrast Stevie and David, Daniel's real-life sister, Sarah, plays a careworn but perky hometown waitress without a touch of irony. (Moira: I am thinking it's something much more menacing. Twyla: Like the wind?)
The naturalness of the actors lends itself to the overall success of this show. I think everyone with a sense of humor should watch it.

prisrobReviewed in the United States on April 9, 2017
4.0 out of 5 stars
Twisted Minds
Verified purchase
When I looked at the title of the series, I thought this will be a low class series, in it for the laughs. Well, yes, laughs are plenty, but this series has a good background story. This series seems to have the entire Levy family as characters, and, they are all quite good.

Eugene Levy is the patriarch, Johnny Rose. He is a self made man earning millions, until he lost everything. His wife, Moira, played by Cathetine O'Hara was an actress appearing in soaps, and she is actually very funny. Down on their luck, with their two children, Alexis, played by Anne Murphy, and her brother David, played by Dan Levy. Alexis is the play child,who follows her mother's fancy of 'things'. They all mean a lot, name brands and all. Dan, appears to also live Things, but he is much more reasonable. So, here they are living in a small motel, Schitt's Creek.

Storylines come and go, but always with humor and good manners. Johnny is a very reasonable man, thankful for everyone, and trying to figure out what happened to their lives. The rest of the family tags along, hoping for a change. Humor us well placed, but there is always a serious side to the issues. Certainly a play on words, but fun to observe.

hvservReviewed in the United States on October 20, 2016
5.0 out of 5 stars
Love this show
Verified purchase
Update to earlier - Show is now back on Prime, but we stupidly paid for 3 intervening episodes before Amazon saw fit to make it available again on Prime again. Apparently season 3 is going to show up in late 2017. If Amazon is still playing rope-a-dope with Prime customers, I might have to cave and just buy the whole season rather than wait an additional year to be taken advantage of. Really good show.

Love this show. Waited a year for season 2 to be available on Prime. If I could give Amazon a zero, I would. The show cost $ for a year, then went Prime. Then, inexplicably, it cost $ again. We were on epsiode 7 when that happened. I contacted Amazon, and was told by the rep. that he didn't understand what could have happened and that he would have to contact the "technical team" and have them look into it. No further word and it has still not returned to Prime. I won't be holding my breath for season 3. This is a perfect example of how how the value of a Prime subscription is constantly being eroded.
2 people found this helpful

Placing the wealthy Rose family into the middle of Schitt's Creek is a crazy plot...the entire family is hilarious...the townspeople as well. Great to watch the Rose family grow and slowly figure out that money isn't everything. But the journey along the way is laugh out loud. Example, David taking his designer clothes to sell at a local Goodwill type store like it's a posh boutique. .Hilarous!

Dont' have time to write about why but you'll love Moira's dramatic behavior and Alexis' wild girl antics...their fashion is realy cool....Dad, Johnny Rose is and always has been an expert comedian...and Roland N. Schitt is the icing on the cake.

I've introduced this show to several friends....they're all hooked like me. Time for you to binge on Schitt's Creek!
2 people found this helpful

JournalistaReviewed in the United States on August 5, 2021
5.0 out of 5 stars
Can't stop laughing!
Verified purchase
This series is so well-written that I usually watch each episode 3-4 times to catch all the snappy dialogue! I've even watch with closed captions switched on because there's always something I've missed. Always fast paced and best comedy writing ever by Daniel Levy. The cast in unparalleled. If you liked Season One, it just keeps getting better with Season two. Thank you Daniel!

aggie4lifeReviewed in the United States on February 1, 2017
5.0 out of 5 stars
Took a few episode to get in to....
Verified purchase
I gave this series a chance because I am a big fan of Eugene Levy and Catherine O'Hara. I've always thought they were hysterical in all of the Christopher Guest films, so I figured they wouldn't let me down in Schitt's Creek. I wasn't quiet so sure in the beginning, as the first couple of episodes were slow going. In fact, not a whole lot happens from episode to episode, but the interactions between the Roses is where the magic is at. The cast's comic timing is great and it's quiet nuanced humor, but if you're not a fan of "Best in Show," "A Mighty Wind," et cetera, you probably won't like SC. It's basically a fish-out-of-water story, and it's biggest laughs are driven by the fact that the Roses are so outlandish in their inability to understand simple living in small-town America.
See all reviews
Back to top
Get to Know Us
Make Money with Us
Amazon Payment Products
Let Us Help You
EnglishChoose a language for shopping. United StatesChoose a country/region for shopping.
© 1996-2022, Amazon.com, Inc. or its affiliates