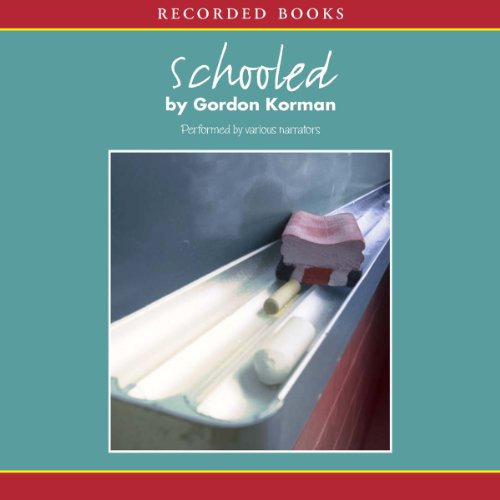 Gordon Korman (Author), Andy Paris (Narrator), Steven Boyer (Narrator), Helena Prezio (Narrator), Nick Landrum (Narrator), Suzanne Toren (Narrator), Karen Zippler (Narrator), James Yaegashi (Narrator), Recorded Books (Publisher) & 6 more
4.7 out of 5 stars 1,767 ratings
See all formats and editions
Sorry, there was a problem loading this page. Try again.
Popular author Gordon Korman pens a funny fish-out-of-water tale that even the most reluctant reader will find impossible to resist. Capricorn Anderson has spent his entire life on a farm with his hippie grandmother. After an accident puts Grandma in the hospital, Cap is forced to attend Claverage Middle School and live with his guidance counselor. The tradition at Claverage is for students to nominate the biggest nerd for class president, and Cap is the obvious choice. But with his odd ways and positive outlook, Cap just might turn the joke upside down by becoming the best class president ever.
Read more
©2007 Gordon Korman (P)2007 Recorded Books, LLC
Previous page
Next page

Your audiobook is waiting!
Learn more about membership
List Price: $23.13
You Save: $0.18 (1%)
By completing your purchase, you agree to Audible’s Conditions Of Use
Sold and delivered by Audible, an Amazon company

Amazon Customer
2.0 out of 5 stars Damaged goods sold as new
Reviewed in the United States on October 14, 2020
Bought this box for my child as "new" for a school requirement. Arrived with significant damage to front and rear covers. Rear cover appears that someone repeated stabbed it with am object creating holes through the rear cover into to several pages into the book. No damage to the packaging. Very disappointed. Giving 2 stars as this is not the writer or the books fault. Would return the book if my child didn't need this for school tomorrow.
Images in this review

Ashley F
5.0 out of 5 stars A really great read
Reviewed in the United States 🇺🇸 on September 2, 2022
Verified Purchase
In the book “Schooled” the author Gordon Korean shows that all people can be leaders. Through this crazy written book characters take place in school and many more places and settings. The author claims and shows to be a leader or to be a representative person and it takes a lot of courage. The author shows this with good detail and crazy point of views.

During this amazing book the words are so great in the way that the author uses them. In the beginning of this book called “Schooled” a boy named Cap was pulled over because he was driving his teacher that he said “mom” at the Ava of 13 years old which to me sounds absolutely crazy that it actually happened. One dislike is that the author would get me confused by switching perspectives. One like I did have was how the setting was and how it wasn’t the same every chapter.

In my own personal opinion I thought the book was amazingly well written besides the crazy switching between point of views. One thing that was written well was the plot and settings and also the details, they were really where you could understand the book. Another thing was the way he made them talk through good and excellent dialogue. For example in the text it says “I’m sure he lives on to be a total basket case.”

I completely loved the book so much with the great dialogue. I would really recommend this to a lot of people like my friends and family. This book reminds me of my brother in the 8th grade. I have to say I have not seen another book like this one but I’m sure this book is the best. I would rate this book a 3 and a ½ out of 5 stars.

A. Brandenberger
4.0 out of 5 stars great book
Reviewed in the United States 🇺🇸 on August 26, 2022
Verified Purchase
Schooled is a great book for those who like drama. For example [SPOLIER ALERT] the main character Capricorn Anderson is a 13 year old boy who lives with his grandmother who has to go to a public school and explores the outside world for the first time.

My likes and dislikes about the book, the book takes place around the city, and there are different sense of the story all effect it [SPOLIER ALERT] like when Cap goes to the jewelry store and buys a necklace for the persons daughter he has been staying with because the dad said he would but never did. Then there are some meh moments like [SPOLIER ALERT] when they voted Cap to be eighth grade president to bully him, they could of added more stuff to make it dramatic instead of just spitballs and telling him to go to fake rooms.

Was the book well written, yes the author wrote it extremely well. Like changing the P.O.V each chapter . The story keeps going each chapter like the story does not repeat it self when a new P.O.V, It makes it feel like you actually get to see all the drama, like Cap got tricked to dress up as a rival to the school he went to and got tackled by the football team and the school scream in joy its like you could feel the school spirit.

The book school reminds me of wonder because of all the action and how they change P.O.V every chapter. The drama and fights are both to protect a friend. This book is like the book flipped because of how each chapter is a different P.O.V, because of that you understand each character better.
Read more
Helpful
Report abuse

Jeff M.
5.0 out of 5 stars Best Book About School Ever
Reviewed in the United States 🇺🇸 on March 8, 2018
Verified Purchase
My 11 year old son read this book and has this to report -

Capricorn has always lived in Garland with his grandmother Rain. When Rain falls out of a tree picking plums she gets injured and must go to the hospital. Of course, she can't drive so Cap has to drive her but then he gets caught and almost arrested on the way to the hospital. He is only 13! They make it to the hospital and Rain has a broken hip, so Cap must go to a public school and try to fit in while Rain gets better in the hospital. I would give this book an A because it had admirable characters and it went right into the plot action. Also, there was a lot of humor and a recurring message: even if you look weird you can still be a kind and loyal friend.

This is a great book because it has an admirable main character, Capricorn. "When the burning haze cleared my eyes, the first person I saw was Zach, untouched and laughing at me. Down at my feet lay Cap, out cold, his nose gushing blood like a geyser, (page 141)". This shows that Cap would sacrifice himself so there would not be a fight. Another admirable character is Ms. Donnely, Cap's foster mom. "My mother is the most generous, caring, good-hearted, sympathetic person in the world. She even chose a career devoted to helping people. She's a saint, (page 56)".

There was a lot of humor in the book. For example, the whole plot idea of a hippie kid trying to fit into a public school when he thinks the best tool ever is duct tape and doesn't even know what money is makes this book very entertaining and funny. One example of Capricorn not knowing about money is when he thinks you have unlimited money to spend just because you have a check. "I didn't have any money. But I had something even better – checks, which automatically counted as exactly as much money as you wrote in the box, (page 108)." Another funny thing is how different Capricorn's life is from most kids. "'Well, there was the time I whacked my head on the pump handle of our well. Doc Cafferty shaved part of my scalp so he could put in stitches.' (…)'Who's he? Your pediatrician?' 'No, the vet', (page 93)"

I also enjoyed how this book got right into the plot action. On the first very page Capricorn says "I was thirteen the first time I saw a police officer up close. He was arresting me for driving without a license, (page 3)". Then, a few pages later, Capricorn asks himself "How could an able-bodied teenager allow his grandmother to scale a plum tree? Simple. She wasn't my grandmother at the time. She was my teacher, (page 5)". That drew me in and me made me curious about if he was homeschooled or was just sick.

Overall, this was a suspenseful book that made me want to keep reading. My mom had been bugging me for a year to read it, and I'm glad I finally did. It gets right to the action, has admirable characters, and is hilarious.
Read more
24 people found this helpful
Helpful
Report abuse
See all reviews

MandyG
5.0 out of 5 stars Excellent youth book and excellent book for all ages, say 10 or 11 and up.
Reviewed in Canada 🇨🇦 on February 20, 2016
Verified Purchase
This is such a GOOD young adult book, unique in plot, and excellently portrayed and crafted, a book to make readers of all ages less materialistic and more caring and centred on the best values. I haven't read all of Korman's books, but I would say this is his best, and having worked many years in school libraries, one of the best youth books I've read, and one of the best books I've read for all ages.
Read more
One person found this helpful
Report abuse

Norm Snell
3.0 out of 5 stars Good for School ciriculum
Reviewed in Canada 🇨🇦 on February 1, 2021
Verified Purchase
It was bought for my grandson .
Schools Re putting it in their program , was bought as a reference tool
Read more
Report abuse

Tanice
5.0 out of 5 stars Fantastic story
Reviewed in Canada 🇨🇦 on May 26, 2022
Verified Purchase
Fantastic story to read out loud in your classroom
Read more
Report abuse

Hua Li
5.0 out of 5 stars Good book
Reviewed in Canada 🇨🇦 on August 26, 2020
Verified Purchase
My daughter read the book. She like it very much. She’s 12 years old.
Read more
One person found this helpful
Report abuse