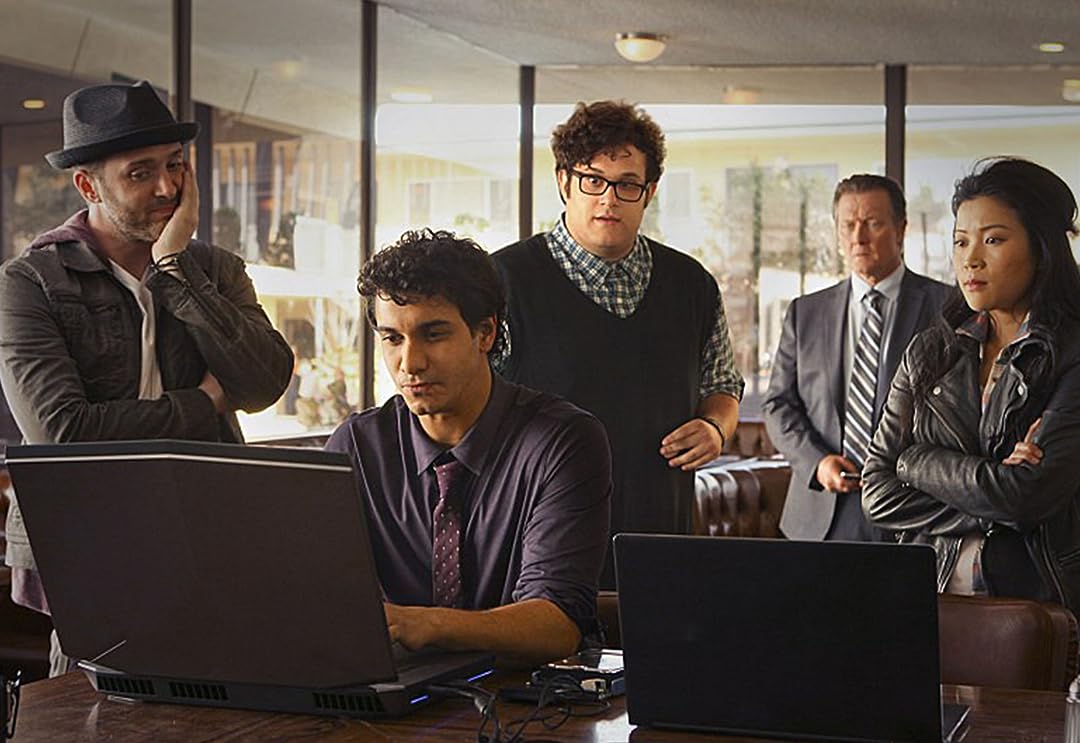 (2,409)
7.12015X-RayTV-PG
Scorpion is a high-octane thill ride based on the true story of Walter O'Brien, an eccentric genius with the world's fourth-highest I.Q. and the creator of a company of brilliant misfits who use their mental muscle to defend the planet against complex high-tech threats of the modern age.

Allison HammondReviewed in the United States on December 2, 2014
4.0 out of 5 stars
Scorpion Is Worth Watching
Verified purchase
I decided to actually write a review for this show because after reading some of these reviews, I felt like some praise was necessary. This is an good, fun show. I've watched every episode this season and I realized that above all else, I'm watching for the characters and their relationships with one another. By nature, the show seems formulaic: Super genius awkward/cute guy forms a group of like minded (and socially inept) genius's to help people, working with Homeland Security (edit) to solve crimes. There to help them interact better with normal people is a sweet ex waitress and single mom to a super genius 8 year old. OK, so YES, there are plot points and whole driven episodes that are so unbelieveable (Spoilers ahead) Do I think that they could drive that car under that airplane just to keep the dowload going...No. Do I think they should ever be dragged into a combat zone with armed rebels.... HELL NO....do I think they would be able to break out of jail and zip line across buildings into a high security casino...No No no because that zipline was mad scary. BUT none of this matters to me in the slightest because its Fun. It's exciting. And throughout all these misadventures we get to watch our group of unlikely heroes and social misfits back eachother up and try to relate to the outside world (and eachother) Also, Katharine McPhee is soo likeable, its kind of adorable. If you are interested in a Jack Bower-esque show, go watch reruns of 24. This show is action with some emotional fluff, and lots of heart. Watch it for that.
135 people found this helpful

CristinaReviewed in the United States on July 8, 2016
5.0 out of 5 stars
Action-packed with lots of heart!
Verified purchase
First off, to all the people complaining about the "fake science" in this show, GET OVER YOURSELF. It's a TV show, meant for pure entertainment value. The creators didn't write Scorpion as a way to give viewers an hour long science lecture every week. If that's what you want, then go watch National Geographic or something.

Who cares if not everything they say is true? It's fun to watch! And honestly, for me, while I enjoy all of the crazy action immensely, what really made me stick with the show (and actually binge watch the first two seasons in less than 2 weeks) is the heart of the characters. Putting aside the fact that they're geniuses, the struggles that they go through are some of the most real that I've seen on any TV show or movie. I absolutely love all of the relationships between the characters because they're all a mix of good and bad, which is how real relationships are.

So if you choose to not watch this show, then fine. That's your choice. But don't do it because you're so "tired of all of the fake science", because that is literally the stupidest thing I've ever heard.

Patty BulackReviewed in the United States on May 30, 2016
5.0 out of 5 stars
Scorpion = BigBangTheory + The Odyssey + Leverage
Verified purchase
This show is a highly engaging, intellectual, (postponed-for-genius) coming-of-age journey populated by endearing characters who I care about - so it has a lot of staying power. I really enjoy the personal and interpersonal development of the band of "misfit geniuses" portrayed credibly amidst the twists and turns of the problem-development-and-solving unfoldings of each show's plot. I savor the story-telling of the show's characters, which runs throughout all of the episodes, with a good mix of who-they-are-now shown in their behavior in current events with how-did-they-Get-here dribbed and drabbed in flashbacks, soliloquys and catchings-up of the characters past struggles and exploits with the current events. I am a total sentimental softeee when it comes to people opening up to a richer-and-truer view of themselves and the depths to which that can take their interpersonal relationships. This show pushes all the right buttons for me, and I fully, richly and deeply drink it in and savor it. Did i mention ... ? ... that the show has wonderful humor skillfully intertwined with all of its "heavier" elements, so it doesn't take itself too seriously and stays wonderfully satisfying and always fresh & fun.
15 people found this helpful

GinaReviewed in the United States on August 28, 2021
5.0 out of 5 stars
Good show until season 4
Verified purchase
I was a big fan of Scorpion and was upset that they canceled it especially leaving it the way they did in season 4. Some of the stuff that the characters do later in the seasons doesn’t make a lot of sense. I thought season 1 & 2 were very good. Season 3 was still good but season 4 was starting to annoy me because the characters were behaving not like themselves. And the season finale which became the show finale was the worst!!! If you’re enjoying this show for the first time I suggest you stop watching halfway through season 4
One person found this helpful

JennD.39Reviewed in the United States on May 9, 2016
5.0 out of 5 stars
a real favorite xo
Verified purchase
This show is SICK!! (in the GOOD sense ')
I highly doubt that one team could constantly be up against such odds, over and over and over again...from one episode to the next, there is one obstacle after another ~ and all completely plausible within the context of the plot. Every other minute I am on the edge of my seat.
And the interplay among all the characters is highly entertaining ~ watching Walter evolve is an ongoing revelation, not to mention the comic relief of Toby, Sylvester and Happy ~ each in a very unique way. Paige brings a special brand of street smarts to her role, together with her genius son Ralph, who is probably even more of a child prodigy than Walter was himself, if that's possible.
All in all, a real gem. I will continue to watch this series on my Prime TV, maybe even order the DVDs just to catch a glimpse behind the scenes...and go on to be re-educated myself!!
Well done, all.
8 people found this helpful

DougReviewed in the United States on February 5, 2021
4.0 out of 5 stars
Good, but a little predictable.
Verified purchase
If you like plug and play shows that have a good theme and fit a particular format, this one fits the bill nicely. I liked it am happy I watched season one. I will not likely watch anymore though as it repeats the same style each show. A saving grace is they do have fun ideas and characters that make it worthwhile to watch if you're looking for some time to waste.

SusabethReviewed in the United States on June 16, 2015
5.0 out of 5 stars
Love It!
Verified purchase
OK. To be clear, I am am a loyal and obsessed fan of this show. Sure, details get lost ( like in medical scenes), and sometimes it seems a bit corny. But I love the cast, and the team that has been assembled, and watching how they are all growing and evolving with the care and support of the team. I love that intelligence and smarts get the job done, and are highlighted in this show, especially for women. Great role models, too. It is not your usual, run of the mill crime drama with loudness and no substance. Love that there is really nothing else like it right now. Keep up the good work! Cannot wait for next season.
10 people found this helpful

Charlie VReviewed in the United States on December 4, 2014
3.0 out of 5 stars
pretty good start, but finishing the season weak
Verified purchase
I got pretty excited about this series because my daughter picked it out and it looks like something that we could enjoy together (a rarity). The basic conceit is that there are several geniuses, a normal person, and a DHS handler, all of whom work together to solve critical and time sensitive problems. The normal person is the glue that holds the group together and deals with their quirks. Each genius has a specialty from mechanical ability, computational ability, psychological ability, etc.

The first three episodes are interesting and I was able to suspend my disbelief and just enjoy the show rather than be critical (i.e., that is not possible, why would they do that, etc. that takes you out of the show), but the following seven episodes have gotten progressively unbelievable to the point that it is difficult to keep my mind in the show and avoid the critique. Nonetheless, it is a good enough series that I am not sad to have paid for the season and to give my daughter and I something to do.
See all reviews
Back to top
Get to Know Us
Make Money with Us
Amazon Payment Products
Let Us Help You
EnglishChoose a language for shopping. United StatesChoose a country/region for shopping.
© 1996-2021, Amazon.com, Inc. or its affiliates