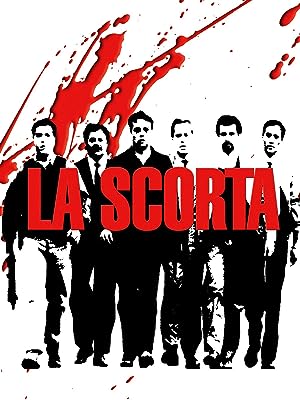 (35)
6.61 h 35 min199416+
Sicily, 1992: When a high-profile judge and his bodyguard are brutally murdered, four reluctant young cops are assigned as 'La Scorta' - Italian for 'the escorts' - to protect the replacement prosecutor from Mafia assassins. But in a country where high level corruption and sudden violence are a way of life, the squad quickly find themselves outnumbered, outgunned and desperately out of time.

D&MReviewed in the United States on October 27, 2017
4.0 out of 5 stars
Very Well Done. Enjoyable.
Verified purchase
I was especially interested in this film after having watched both the movie Gomorrah, and the two season TV series Gomorrah based on the movie on Netflix. Gomorrah is based on the Camorra crime organization based in Naples. Having only been familiar with the Sicilian mafia, I had not heard of the Camorra or the lesser known (but larger and wealthier) 'Ndrangheta based in Calabria.

The haunting music, and emotional impact of this movie is compelling, and it was interesting to view this from the perspective of the bodyguards. I will say, however that if any one of these crime families is out to get you, then basically you can say goodbye, and no amount of bodyguards will help you. The rare exception may be Naples native and former journalist, Roberto Saviano, the author of Gomorrah, who has remained in hiding since the book was originally published in Italy in 2006, and is constantly attended by bodyguards, reportedly never staying in the same place for more than 48 hours at a time, although he has been occasionally interviewed.

If anyone has any doubts about the lengths to which these powerful crime families will go to take you out, then remember how mob prosecutor Giovanni Falcone, his wife Francesca, his driver and five members of his security detail were killed in 1992 in an ingenious way while driving from Palermo, and later his colleague, Paolo Borsellino,who was murdered only two months later.

It takes a lot of courage to be a bodyguard to a target in Italy. This movie is a must watch, you won;t regret it!

are you tired of made up shoot-em-ups ? watch this-
3 people found this helpful

Gunny 48Reviewed in the United States on October 10, 2019
4.0 out of 5 stars
In a pit of vipers only a snake survives.
Verified purchase
Good presentation of the reality of Sicilian graft & corruption at all levels. Not enough honest people to make a difference.
One person found this helpful

dorotiReviewed in the United States on February 8, 2018
1.0 out of 5 stars
One Star
Verified purchase
This movie is all talk
One person found this helpful

MichaelReviewed in the United States on April 13, 2018
5.0 out of 5 stars
Drama based on a true story.
Verified purchase
Excellent Italian movie with English subtitles.

Amazon CustomerReviewed in the United States on November 8, 2003
5.0 out of 5 stars
Tense &amp; very convincing
The story centers around a number of very different men (and their families)...they all have one thing in common - their job. The job is to protect a new judge who is intent on clamping down on the mafia - in Sicily...not quite a regular 9 to 5 job and one which gives plenty of room to bring you to the edge of your seat. The score is excellent and adds wonderfully to the tension which just seems to build and build in a delightfully non-Hollywood fashion that doesn't enable you to predict what is going to happen or when.
A great movie which is well worth reading the subtitles for if you don't speak Italian...too bad its not on DVD yet - a VHS copy will surely get worn out as even knowing the story does not remove the impact that this movie has so there is a good chance you will watch it often.
4 people found this helpful

Jack BurdenReviewed in the United States on December 10, 1999
5.0 out of 5 stars
La Scorta: An Un-Hollywood Thriller
Because Ricky Tognazzi didn't have a Hollywood budget to make this true-crime story work, he relied on the basics: fast action, interesting characters, and genuine tension. Based on the true story of a government prosecutor who stood up to the Mafia in Sicily, "La Scorta" is a good buddy movie and great action movie rolled into one. With little special effects at his disposal, Tognazzi creates tension the old fashioned way: skill. He makes even the most simple moments seem dangerous, as they must have seemed for the real-life escorts whose job it was to protect the prosecutor from assasination. "La Scorta" is vivid proof of great action movies outside of Hollywood.
10 people found this helpful

William B. ChisholmReviewed in the United States on February 23, 2002
4.0 out of 5 stars
Don't miss this film
This is a film that Hollywood will probably remake and butcher a la La Femme Nikita. Great, great drama. See the real thing. Ricky Tognazzi is a serious talent. See it.
See all reviews
Back to top
Get to Know Us
Make Money with Us
Amazon Payment Products
Let Us Help You
EnglishChoose a language for shopping. United StatesChoose a country/region for shopping.
© 1996-2022, Amazon.com, Inc. or its affiliates