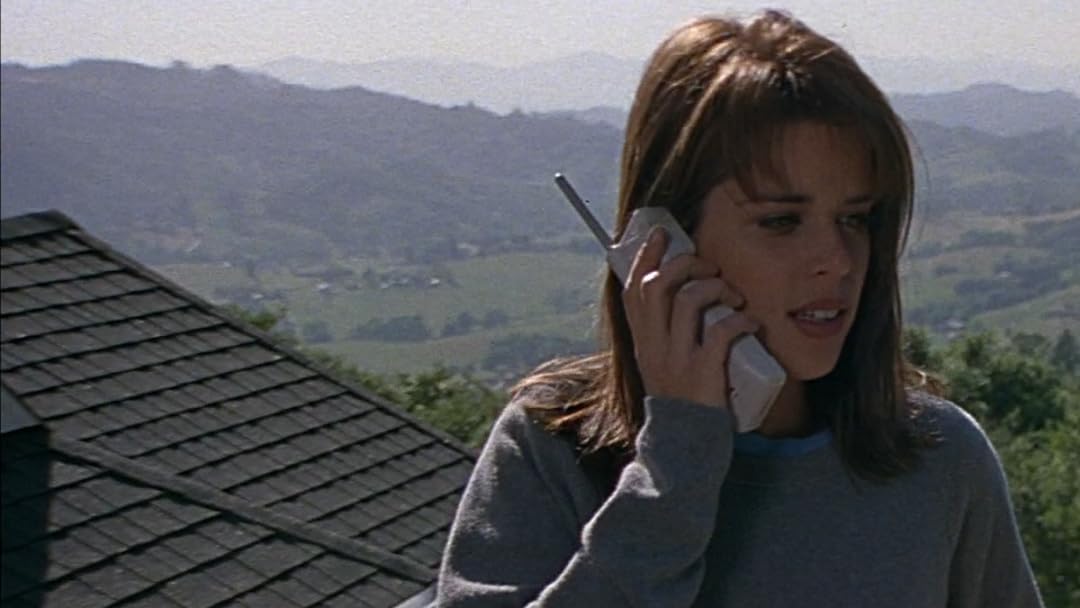 (14,322)
7.31 h 50 min1996R
After a series of mysterious deaths, an offbeat group of friends get caught up in a lively mix of thrills and chills in the smash hit movie that transformed the horror genre into a phenomenon.

Amazon ConsumerReviewed in the United States on September 11, 2019
1.0 out of 5 stars
WARNING: Do Not Purchase!
Verified purchase
I purchased the set of four Scream movies and found that the original Scream movie was not in wide screen nor did it fill my TV as do all DVD or Blu Ray products. I sent it back and it was replaced with the same items with just the bad Scream DVD. Scream 2, 3, and 4 looked great and worked fine. Amazon would not replace the set again so instead of returning the set for credit I thought I would purchase just the Scream DVD and would replace the one bad DVD in the set and eat the cost of the replacement. Well, this single DVD was just as bad as the first and second Scream DVD in the sets so I am sending it back for a refund. Either this is a "pirated version", the Seller is trying to unload all its bad copies, or the manufacturer really screwed up. I'm not a "happy camper" and trying to go to Lionsgate to find a replacement is like going through Hell. It's just not worth it.
10 people found this helpful

joel wingReviewed in the United States on June 11, 2021
3.0 out of 5 stars
It's a decent thriller
Verified purchase
Scream was one of Wes Craven’s most popular horror franchises. It was a stalker film with a killer terrorizing a cast of young stars like Drew Barrymore who opens the story. It contains some basic elements. First, the killer calls his future victims. Second, there’s suspicion about who is the perpetrator. These are meant to build up the tension before the killings start. There’s some irony in the script as well such as when Neve Campbell is talking about her pain and how it wasn’t a movie or when Jamie Kennedy goes over the rules of slasher flicks. None of its scary but it’s a decent thriller.
4 people found this helpful

Wes Craven's best, with great moments of thrills and suspense even if it's only intermittently "scary" (frankly I think Craven missed his calling a bit by focusing his career so much on pure horror, he outdoes Brian De Palma at his own game here). The entire cast became stars and so did writer Kevin Williamson and composer Marco Beltrami. It even helped the 'Halloween' movies make a comeback! And there's even an entire "home invasion" subgenre of movies that resemble the beginning and end to 'Scream' more than they do, say, 'Straw Dogs.' It's a classic, for sure.

CordroyReviewed in the United States on November 17, 2021
5.0 out of 5 stars
Classic for a Reason
Verified purchase
I made my niece watch this for the first time right before Halloween (she’s in her early 20s, I’m late 30s) and I went full “Randy” explaining the history of slashers and what this move meant to the genre (slasher flicks and Horror in general). I had to explain that slashers are my cinematic comfort food. Sick but true. There’s something about the formula that allows you to feel stressed, enjoy the jump scares, but still fee “safe.” At the end she got it. She said she was “stressed but not scared”, trying to figure out whodunnit. This movie, and the other 90s/00s treasures it spawned, led to my love of Horror. Ghosts, vampires, demons - all great. But there’s nothing like a psycho killer getting his comeuppance from the Final Girl. 🖤 I love it so much I’m actually excited for the 5th installment. It’s bloody nostalgia at its best.
One person found this helpful

Amazon CustomerReviewed in the United States on January 14, 2017
5.0 out of 5 stars
It's a Scream, baby!
Verified purchase
I have always loved this movie! Scream it s not your average horror film as it is cholk full of comedy, mostly from Matthew Lillard. Keep an eye out for a cameo of Linda Blair (The Exorcist) in this film, as the other reporter. I am not the one who would normally own a horror film, but this movie is one worth owning. It is a widescreen copy, for those who do not widescreen DVDs and prefer full screen. It doesn't bother me. The DVD works perfectly.
20 people found this helpful

DiverseReaderReviewed in the United States on May 23, 2020
5.0 out of 5 stars
Wonderful
Verified purchase
I actually saw this when it first came out many years ago. During these times being stuck inside I have teenagers and my husband and I decided to take them on a journey of things we enjoyed. The Scream franchise is one of them. While I love all the movies in it, the first one is the best. It was so unique. Fresh to the horror and mystery scene. Everything was so saturated by typical horror that when this released it was like, "Wow, yes this is what I've been waiting for." And it's stood the test of time.
2 people found this helpful

Stephen MatthewsReviewed in the United States on August 29, 2016
5.0 out of 5 stars
A Wes Craven Masterpiece!
Verified purchase
A Wes Craven Masterpiece! It was 1996 and the horror genre was literally DEAD. Oh sure, horror movies were still being made but most of them lacked any real creative writing instead focusing on rehashing the same old formula over and over (with the exception of Wes Craven’s New Nightmare which did break new ground). Only the very best of them were (Wes Craven’s New Nightmare, In The Mouth Of Madness, Silence of The Lambs, Seven) were lucky enough to break even or do really well in the box office. Certainly the sub-genre of “slasher” movies were scraping the bottom of the barrel at this time in film history. Thus sets the stage for December 1996 and the previous high points for Dimension Films were “The Crow” and “Halloween: The Curse Of Michael Myers”. The 4-year-old studio is still looking for their crown jewel project that would put them on the map as legitimate contender among the big boys.

At this same time an unknown but determined writer named Kevin Williamson has locked himself into a hotel room for 3 weeks determined to not go home until he completes the writing of a screenplay for his newest story which he is simply calling “Scary Movie”. To make a long story short, he completes writing the screenplay and begins to shop it around to film studios. The Weinstein brothers at Dimension films love it, they sign Kevin Williamson to write the film and after initially being turned down by Wes Craven, Wes gave it a second chance and agreed to come aboard to direct the film whose name was later changed to “Scream”.

Wes Craven has an incredible legacy in the horror genre that shaped and re-shaped the entire genre over the course of 40 years of his films. He revolutionized the genre in the 80’s with “A Nightmare On Elm Street” and now over ten years later he was about to do it once again with the Scream franchise. Scream is a genuine masterpiece because it not only contains all of the elements needed for a fulfilling horror movie, it goes one step further and introduces new ideas while being done with a keen sense of self-awareness throughout the movie that had never been done before in the genre. Wes Craven’s New Nightmare started to explore this idea of self-awareness of the actors within the movie but in Scream he took it to the next level. We see the now famous “Rules To Survive A Horror Movie” as perfectly explained by one of my favorite Scream characters Randy. Moreover, this thread of self-awareness runs throughout the picture from multiple characters but never done in an “over the top” manner where it does not “work” within the context of the moment.

It is the story of a small town where people are being brutally murdered and the killer’s attention begins to focus on the lead character Sydney Prescott and as the film unfolds there is revealed a much larger back-story that is under girding all of the events which are happening. No one can create tension and suspense in a scene better than Wes Craven and he is arguably the star of this film because of how brilliantly he tells the story visually from behind the cameras. Scream delivers at all the important angles and keeps you guessing as well as jumping throughout! The ending is fantastic and very original!!

I am a STICKLER for not giving spoilers and even though this film is now TWENTY years old I will still not reveal anything more specific about the film other than to say, this is a MUST watch film for anyone who enjoys a top-shelf murder mystery, suspenseful thriller and slasher horror. Wes Craven’s direction and tone for the film is nothing less than SUPERB and combined with brilliant writing this is an instant classic and is no surprise to this fan/viewer that it turned the entire horror genre upside down upon its release. Horror movies are not supposed to make hundreds of millions of dollars in the box office but Scream and it’s sequels have done just that. It is NO accident!!

This is the film that sparked a myriad of “copy-cat” films in the late 90’s and early 2000’s who were desperately trying to reach the success of the Scream franchise but all of these far more inferior films failed miserably to do so.

Finally, if you have never seen Scream and perhaps you’re not a fan of the horror genre please hear me out, you owe it to yourself to watch this film at least once! Twenty years later it still stands up tall and towering over the genre. Sadly, Wes Craven passed away in August of 2015 but thankfully he was able to see the incredible fingerprint he left on the film industry which he helped shape since the 1970’s. I can only imagine what new projects he would be working on right now which upon completion would once again revolutionize the genre. Rest In Peace Wes Craven and thank you for over forty years of SCREAMS!!!!

WC138Reviewed in the United States on December 7, 2018
2.0 out of 5 stars
Even nostalgia can't save it.
Verified purchase
Has it been twenty years since you've seen this movie? Are you thinking of watching it again? Don't. Really. Don't.

Going in with a warm glow of nostalgia for what I remember as a well done and original horror flick, I was amazed by how shoddy, how poorly written, and how terribly acted this film really was/is. I can't believe there was a time when that passed right by me. Maybe I'm old and cynical, or maybe the movie that troped the tropes just doesn't hold up to the fuzzy memory.
4 people found this helpful
See all reviews
Back to top
Get to Know Us
Make Money with Us
Amazon Payment Products
Let Us Help You
EnglishChoose a language for shopping. United StatesChoose a country/region for shopping.
© 1996-2022, Amazon.com, Inc. or its affiliates