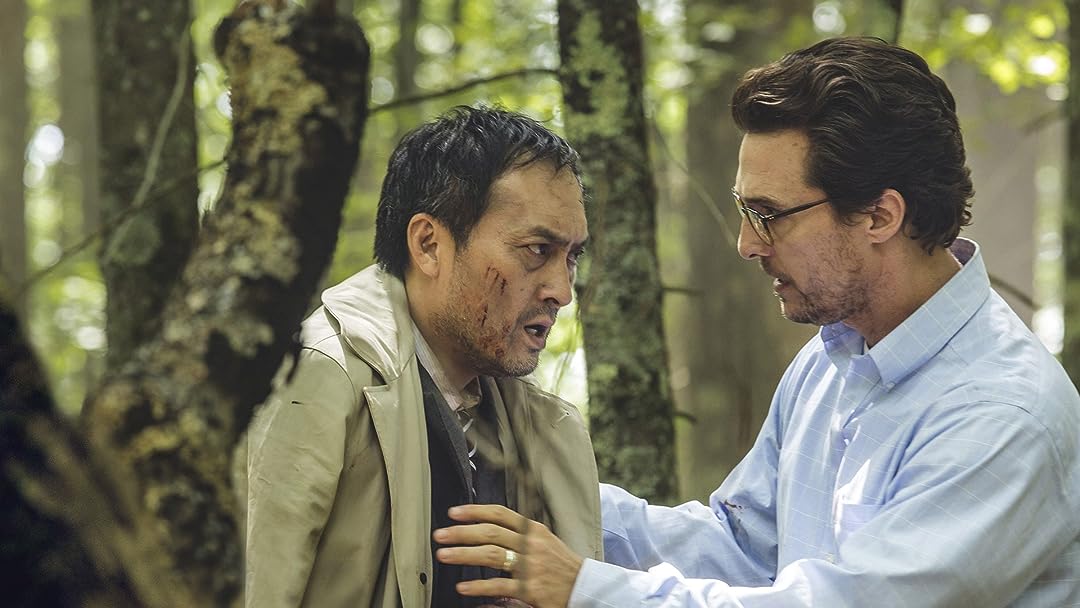 The Sea of Trees

(5,969)
6.11 h 50 min2016X-RayPG-13
Matthew McConaughey stars as a professor with a troubled past traveling to a Japanese forest with a dark history. There he meets a mysterious stranger who takes him on a life-changing journey of love, discovery and redemption.

Christopher H. WilsonReviewed in the United States on May 9, 2017
5.0 out of 5 stars
This is the most underrated movie I've ever watched (and enjoyed)
Verified purchase
I heard about this movie because of news articles that reported it to be one of the lowest-grossing movies in which Matthew McConaughey had recently starred (if not the lowest in his entire career). Further investigation into this movie resulted my discovering some of the most disparaging reviews I've ever read in my life. The general consensus seems to be that this is the absolute worst Gus Van Sant movie ever made, if not one of the worst ever produced in the history of motion pictures.

And yet, after watching it, I found it to be powerful, touching, and completely convincing. I loved this movie and would recommend it to everyone. I am absolutely stunned that such a heartfelt story could be treated with such blatant hostility. All I can think is that the subject matter, which deals with death and suicide and marital turmoil, scared people so badly that they blamed the movie for their own emotional insensitivities and/or insecurities. I think it's also possible that people (especially film critics) have become so accustomed to movies always being produced within the narrow confines of commercially-acceptable formulas that they can't intellectually digest anything that deviates from the comfort zone of the status quo.

I think everyone who was involved in the production of this movie should be proud. It's not often the case that a work of art disturbs so-called "expert" film critics so severely that they refuse to acknowledge its value.

Dr. F. SistiReviewed in the United States on September 3, 2016
5.0 out of 5 stars
A Life Lived Means Asking For Forgiveness
Verified purchase
I have not written many film reviews over the past year or so because, honestly, I have not been moved by the majority for the films I have watched during that timeframe. The Sea of Trees has changed all that!

A film's story is always the final arbiter for a successful film but acting, directing and production values must provide equal measure for that overall success to transcend. In the case of The Sea of Trees all of those contributing factors operate well, not necessarily perfectly, but well enough so as to not detract from the underlying story. The story bears the largest responsibility in The Sea of Trees.

It was not too long ago that the actual Japanese suicide forest, Aokigahara, was in the international news. At that time a number of people who were interviewed spoke of the forest and attributed mystical powers to the place as well as their limited understanding of the many complex lives that have ended there. This background provided a powerful leavening to the film's story.

There is a real place that provides the backdrop for the simple life-ending quests that drive the story. In the film, the lost man is seeking release. Instead he ultimately finds compassion and purpose that aids in his own sense of dealing with guilt of so much precious time having been wasted with his wife while wrestling with his own ego.

What is unique to the film's story is the element brought to life in the character of the wandering stranger. Watanabe is the perfect representative for the stranger and the spirit of the forest. There is a fragility portrayed that seems almost ethereal. Here, the film's production values leap to the center stage with so much pain and sorrow offset by a simple, beautiful, orchid flower that returns late in the story. Throughout, the director's eye provides the lense for the audience to share the moments of discovery and sad horror of the use to which the forest has been put by all who those who sought release from their personal purgatorial lives.

The whole of the story is moved along not so much by the characters attempting to find safety in the forest but more so by the flash backs used to identify why McConaughay's character finds himself at the entrance to the forest in the first place. The audience is provided with the rationale and the necessary back-story of his wife's personality and her diminishment as she becomes ill and eventually passes away. This leaves the audience with an insight that only good story telling can accomplish. Moreover, these accomplishments come with the sparseness that keeps the story moving along and does not collapse into cloying distractions.

When the forest orchid once again appears, as the replacement for the stranger, the audience can nod and share the main character's sense of peace.

All of this story is confined to four principals; McConaughy, his wife, the stranger and the forest itself. That, sparseness of characterization demonstrates how well the story and the director's interpretation of that story coincided.

At the same time, the forest carries the major burden of the story and it does not miss a beat with the haunting photography. Additionally, each torturous step by the characters means something and, if removed, would dimish the piece. I thoroughly enjoyed the story, the acting, directing and the production! A wonderful and meaningful movie.

This movie represents all of the potential of film to present a story without growing outside of its given channel and hence remaining a gem that will bring me back to relish the work again in the future.

SarahReviewed in the United States on February 5, 2017
4.0 out of 5 stars
Perspective is everything
Verified purchase
Perspective is everything! I can't believe any marriage would be as hurtful and as cold as the one portrayed here early in this film, and yet I know there are marriages exactly like this or worse. That aspect of the film is truly sorrowful. However I don't think guilt or bitterness or suicide is the message of the film. In the the end, for me, it was about love. Not romantic love. Pure love. Knowing the worth of a soul. Our choices. The way we treat other people. Really it the story of the Good Samaritan. Only, who is being rescued and who is doing the rescuing? You can decide. I loved that the forest represented purgatory! I appreciated the role of a savior and the important issues of sin, repentance and forgiveness. I'm glad he embraced hope and peace after receiving that redemption. I also loved the tender mercies throughout the film. It's worth watching. I watched it first without knowing anything about it or reading more than two reviews. It was afterwards that I did more research on the film. None of the themes in the film were new to me, but I was grateful to see material that is revelant to human struggle rather than the constant fantasy drivel pouring out of Hollywood these days. Not a film to watch with distractions or other people. I suggest watching when you have time to yourself so you can reflect on the messages, as I believe the real value of the film is how it affects and inspires you. Perspective is everything.
44 people found this helpful

CjReviewed in the United States on November 20, 2016
5.0 out of 5 stars
Finding Meaning in Death
Verified purchase
Deep currents run here. Not for those desiring superficial inch deep entertainment, however if watched with an open mind, and heart, this beautifully acted film can deliver a message that we all need to hear. There is so much more to life than the physical and what better place to discover this than Japan. An ancient culture that grasps the mystical and can share if only the Westerners can close their eyes and see.
88 people found this helpful

joel wingReviewed in the United States on July 12, 2021
4.0 out of 5 stars
A tragedy with a beautiful ending
Verified purchase
Matthew McConaughey goes to a forest in Japan where people commit suicide. There he meets Ken Watanabe who has the same intention. McConaughey is inspired to help Watanabe and in the process saves himself. The movie then flips back and forth to explain how he got there and where he’s going. Watanabe says they are in a purgatory and it turns out McConaughey was already there before he arrived in Japan. As you can tell this is a dark, emotional and moody tale. That also means it is not for everyone because it’s a tragedy until the end which is really beautiful.
3 people found this helpful

magpi55Reviewed in the United States on January 12, 2021
5.0 out of 5 stars
Thought Provoking
Verified purchase
The scenery was beautiful and the score great But mostly it made think about what we leave behind when we are no longer here. It doesn't spell things out - but you know they are there. And the main character finds comfort when he was sure there was none to be had. Not for those who want a cut and dried story. But if you want something that leaves you pondering life this is for you.
9 people found this helpful

VrestonReviewed in the United States on December 7, 2017
5.0 out of 5 stars
Haunting. Memorable. Subtle.
Verified purchase
Haunting. It will stay with you, mark my word. Some may find it too slow moving, confusing, boring even. It is not a horror film. If you watch it just letting it happen in front of you, almost like one feels when standing in a room and turning slowly surveying everything around, it may have a different (more appropriate) feeling. This also brings up another point - how movies are made depending on the culture. This did not feel like an American movie, more Japanese. I hope that you get what I mean by it. I felt this way after watching if for the first time and returned a number of times, twice after some challenges and once after a loss. It seemed to help since I knew the end and focused on the journey. I would definitely give it a watch. The forest's creepiness factor is minor, just a limbo-like setting, a most unexpected fertile ground where something deeply beautiful emerges.
15 people found this helpful