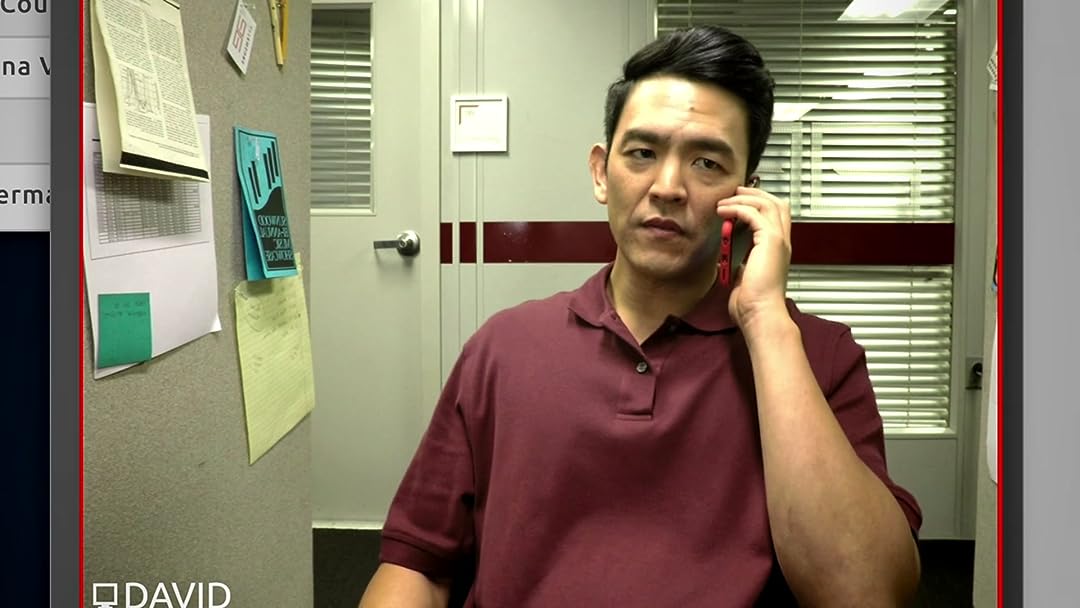 We've seen many films where a father is searching for his missing daughter (there is a place for Liam Neeson's over the top films like Taken, but they're eye candy whose purpose is entertainment as a respite from the grind of daily life.)

SEARCHING, on the other hand, requires viewer participation, which all great filmmakers understand. For the ending to be plausible, you must think back and remember certain characters' actions and statements. NOTHING is shown in this story that is not used. That was one of Hitchcock's rules and director Aneesh Chaganty understands this rule and stuck to it,
helping his rather quickly unfolding ending make sense.

SEARCHING doesn't rely on gimmicks or tropes; it doesn't use red herrings or deus ex machina to move the plot along, but uses the computer screen delivery to great effect.

Highly recommended for lovers of suspense, thrillers, mystery, and movies that push the creative envelope and provide entertainment without numbing your brain or asking you to suspend your disbelief forever. We're given information at the same time as the father looking at the computer screen, and the events that occur are so plausible, our suspension of disbelief never comes into play. It's like watching a documentary. No, it's like having access to this father's computer and all the info on it and all the info that passes through it, during the worst week of his life.

I'm looking forward to watching this again in a few days.

BRIANReviewed in the United States on December 6, 2018
5.0 out of 5 stars
Never felt compelled to write a review before...
Verified purchase
Because it feels kind of self aggrandizing. But screw it, I have to tell someone because this is the most clever, thought provoking, and original film I have seen in a long time. A rare thanks to G**gle, F***book, A**le, et al. for allowing the use of their services and products to be depicted in the film. It added a feeling of authenticity to the unique point of view of the protagonist that wouldn't have worked without it. I felt like I was watching two stories being told at once, one dealing with current events and one dealing with the past, and the way it is related is thoroughly unique; I'd ruin the experience by attempting to explain this flick but the way this film uses something so simple as an anguished father interacting with technology to create a lot of subtext, back story, emotion, and a mountain of suspense had me riveted to the screen the whole way. I think of myself as pretty hard to deceive with surprise twists and turns in the plot of a movie but this one got me many times, and I enjoyed every minute of it. Maybe enjoyed is the wrong word.

I'm embarrassed to admit that I passed this one up a few times looking for new movies to watch because it looked like a total snooze-fest of a movie. Man, was I wrong. I'm watching it again immediately.

What an awesome movie. If you want to see something different, check this out.
78 people found this helpful

RichReviewed in the United States on November 30, 2018
5.0 out of 5 stars
One Of The Best Thriller's Made!
Verified purchase
Searching is one of the best new thriller's that will become a new classic by today's generation and standards. This movie starts off at a fast pace and then goes all out where you can't help, but be glued down and on the edge of your seat from beginning to end! John Cho did an amazing acting job in this movie also! I hate spoiling movie's, so, I'm not going to say anymore because I'm sure everyone who is interested in this movie, may already know a little bit about the movie, but you will DEFINITELY not see the uber, awesome, twist ending coming. You might think you got this movie figured out when you watch it like me, but I swear you won't figure it out until they show you everything. Don't hesitate to buy this, it will definitely be one to watch many times. The one and only thing that sort of bothered me, was, watching this movie (102 minutes long) in all computer windows, camera's, and cell phones. They tried doing the same thing to that other movie "Open Windows" with Elijah Wood. It didn't seem to work out that good for that, movie, but it seemed to work better here for some reason. I hope you enjoy this suspenseful, thriller as much as I did.
37 people found this helpful

BerlinReviewed in the United States on November 18, 2018
1.0 out of 5 stars
Save your money and time
Verified purchase
If you like intelligent well crafted thriller-mysteries with believable actions by the main protagonist and hard to guess endings look elsewhere. This was so stupid any of us could have made a better, smarter YouTube video! Banal, facile and above all pedestrian.
39 people found this helpful

CharlesReviewed in the United States on November 24, 2018
5.0 out of 5 stars
The BEST type of 'mystery-social media/streaming' movie i've ever seen! Thumbs Way Up!
Verified purchase
Wow. What a film. I won't spoil anything. I will say that the acting of the main character, the dad was amazingly well done. The main thing i loved about this movie was it was realistic and showed the viewer what the other movies before about the same similar ideas should have been about. No insult to the viewer here. Prsesented in a unique thrilling engaging atmosphere of realism that can happen to anyone's son or daughter when they venture off online. Again this movie had me glued from beginning to end. Overall a stong 9-10/10 in my opinion. Thumbs Way Up!
24 people found this helpful

A. liscoReviewed in the United States on December 25, 2018
1.0 out of 5 stars
Searching...yes Searching for a reason to like this...Nope none!!
Verified purchase
I like the idea of this movie...and that is where it should have stayed as an idea in someones head and never been brought to fruition.

Searching is not a thriller , it lacks punch and a real sense of feeling. The emotions of the characters are flat, boring and so full of i could care less that i am making a movie and more of Check please!
From the very start Searching lacks ANY sense of realism.....a Father that is 100% clueless about his daughter...sure 80% maybe but 100% really? ....a detective that shares all info with the father....holds press conferences and discusses evidence related to the case with the general public...Blood evidence found on the dash of the car that is still there after being submerged in water for days...and has the look of foul play.... a death declaration without a body or an investigation into the person who supposedly killed her....!!..I could go on but it would be embarrassing to point out ALL of Searching missteps.

Searching is not a thriller it is a low budget badly written con job that tries to pass it's self off as an intellectual, thought provoking, edge of your seat ride into the desperate search for a missing teen.

what they should do is hide this movie in an electronic black-hole and let people who really want to waste 2h of their day go SEARCHING...and hope they don't find it.!!
19 people found this helpful

Katharine ReevesReviewed in the United States on November 27, 2018
1.0 out of 5 stars
Totally Unbelievable
Verified purchase
I spend so much time on my computer, I like to watch a movie to get away from it. Unfortunately, watching this movie just made me feel like I had spent another hour or two doing a million things on my laptop. Plus, it was totally unbelievable. Detectives don't act like this detective acted. Not a smart well-crafted movie like I thought from other reviews. I can't believe I paid 15$ to watch this.
19 people found this helpful

gdmReviewed in the United States on December 9, 2018
1.0 out of 5 stars
This was not a movie
Verified purchase
It is more like a Powerpoint presentation. Acting was poor. I cannot believe this was 7.6 on IMDB. Both my wife and I felt like this was a waste of time and money. There was a plot in there but it was wrapped in mediocrity.
17 people found this helpful
See all reviews
Back to top
Get to Know Us
Make Money with Us
Amazon Payment Products
Let Us Help You
EnglishChoose a language for shopping. United StatesChoose a country/region for shopping.
© 1996-2021, Amazon.com, Inc. or its affiliates