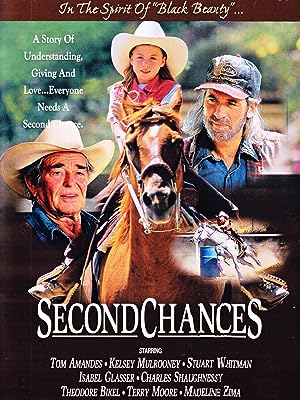 Dwight CurrieReviewed in the United States on July 12, 2021
5.0 out of 5 stars
I Can't In Good Conscience Give Anything Lower Than 5 Stars, But......
Verified purchase
Keep in mind that as an Old Bronc Stomper I can't help but notice things other than the Story line, which was Excellent, and the Characters & those Portraying them, which were Equally Excellent.
The Cinematography & Horse Action returned me to the Dusty Arenas of my Youth and Early Manhood, when I only had money in my pockets due to The Equine Species, and my Love and Some would say, my ability to Handle, Train & Show them, including "Coming Out Of The Chute & Lookin For 8" atop the Hurricane deck of more Rank Bucking Broncs than I care to try to count.
My one & only contention with "Second Chances" is the Almost Total Lack Of Continuity of the Equine Star of the movie.
The Horse shown first as Ginger was a clean limbed, Specimen of an Arabian, while the "Tin Can Chaser" Ginger was a Roman Nosed, Hairy Hooved, Broader & Much More Heavily Muscled Quarter Horse Type, and of a different color than Sorrel.
I understand the Exigencies of Movie Making, having worked for a time at a Horse Buying & Selling Operation in LA for a time. I Broke, and Trained them and We sold horses for Movies and bought some back after filming completed.
Had the Makers of this fine Horse Production had taken just a Little Bit more time & consideration to matching the Horses that played Ginger, I would have No Bone To Pick with this Film....None At All, because other than that it was a fine "Message Movie" Well Acted & had the "Look"of real Barrel Racing Horses & Kids Competing. It brought back what used to be my World, Replete with Dusty Arenas and the Animal Smells of those places where I grew into manhood. I could Almost smell the Dust & Horse Sweat from my Easy Chair and Thank God I only have to walk out in my pasture to Smell the Real Thing after all these years.
That Is A Blessing & this Film reminded of just how Blessed I am in my Old Age & have been all my life.
Thank You Amazon for offering this Fine Film

mositaReviewed in the United States on September 8, 2018
5.0 out of 5 stars
Hard Work, Love and Unselfishness!!!!!!
Verified purchase
What a wonderful movie!!!!! The quarter horses were beautiful and little "Sonny" was a joy to watch. A great movie for children of all ages; for parents, grandparents and their children and grandchildren. Celebrates the power of faith and hope and perseverance.....Teaches that unselfishness is the greatest joy of all. Thank you Amazon for having this film in your prime library.
3 people found this helpful

B. WendlingReviewed in the United States on August 4, 2020
5.0 out of 5 stars
Trust and love of a mean spirited horse
Verified purchase
I thought the movie was great and will watch it again.
2 people found this helpful

Daniel A. AdamsReviewed in the United States on February 23, 2014
5.0 out of 5 stars
GREAT MOVIE
Verified purchase
I said it is great because I wrote it. This probably won't get posted but if it is, this is a "G" movie with lots of heart. You can put your kids down in front of the TV and show this movie without concern for language, adult situations or anything non-kidlike. It's family safe and entertaining. It was the first "G" script I wrote and I hope you enjoy it.,
14 people found this helpful

Gary J. ThompsonReviewed in the United States on July 21, 2019
4.0 out of 5 stars
Fun Movie
Verified purchase
A nice happy ending movie. Kids and adults can both enjoy it.
One person found this helpful

LadybugReviewed in the United States on December 27, 2012
5.0 out of 5 stars
Love it!
Verified purchase
I play this film repeatedly for a little girl who is terminally ill. She loves the film. We were able to take her to a stable to meet horses in person. It was beautiful to watch her "talk" (she is unable to speak in words) comfortably with the horses. I believe she gained from the movie the notion that horses are friendly and loveable...
This particular copy of the film I purchased for one of her pediatric nurses. We always bring our copy to hospital when she is in, and the nurse said she would love the chance to see it...so we gifted her at Thanksgiving. She was very excited to receive the film.
6 people found this helpful

Sandy SorolaReviewed in the United States on October 21, 2020
5.0 out of 5 stars
wonderful story
Verified purchase
Love this movie... Great for a family movie night

kshawReviewed in the United States on September 12, 2012
5.0 out of 5 stars
Heartfelt, Entertaining, Engaging...Two thumbs up!
Verified purchase
I first watched this movie at the age of about 5 or 6 years old and loved it. It carries a great message about beating the odds and working hard to accomplish your dreams. Children will love this movie due to it's charming charecters and great story plot. Adults will love it because of the message it portrays about always looking on the bright side of things and staying positive through pitfalls. Fantastic movie. :) High props for kids and adults alike!
One person found this helpful
See all reviews
Back to top
Get to Know Us
Make Money with Us
Amazon Payment Products
Let Us Help You
EnglishChoose a language for shopping. United StatesChoose a country/region for shopping.
© 1996-2021, Amazon.com, Inc. or its affiliates