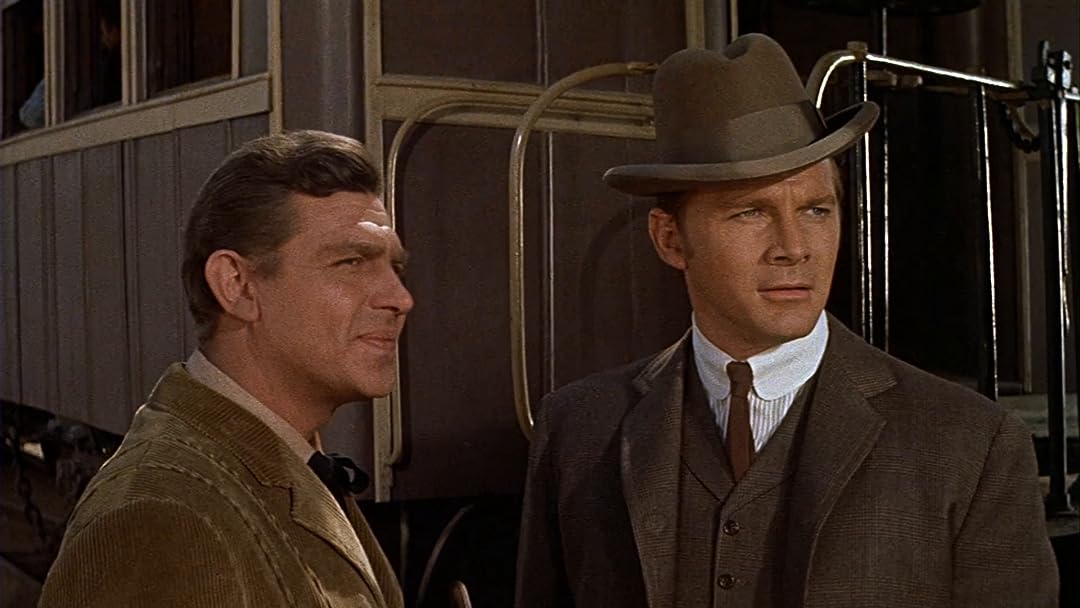 The Second Time Around

dknouseReviewed in the United States on December 31, 2020
5.0 out of 5 stars
The Second Time Around. Great Classic Comedy. Just love Doris Day.
Verified purchase
Heading out west to make a life where new Statehood is impending for herself and her children she goes out and finds work with a lady rancher. The saloon keeper/gambler takes a liking to her as well as her neighbor from the ranch next door which leads to a series of hilarious events. Who gets the girl. You will have to watch it to see. I highly recommend this movie for the whole family. It's loads of laughs and a great two hours of fun. A mood lifter for sure.
2 people found this helpful

The CinemaScope CatReviewed in the United States on February 11, 2011
4.0 out of 5 stars
Rather sweet comedy western
Verified purchase
In 1911 New York, a young widow (Debbie Reynolds) with two children heads west to Arizona to start a new life. But upon arrival, she finds the man who promised her a job dead, murdered in a hold up, and the town run by a corrupt sheriff (Ken Scott) and a gambler (Steve Forrest) and the only work she can find is as a ranch hand to an eccentric female rancher (a restrained Thelma Ritter). Directed by the veteran director Vincent Sherman (MR. SKEFFINGTON), this lightweight western comedy is a typical western romp. Two brawls, one in an ice cream shop and the other in a saloon, and Reynolds a fish out of water city slicker taking more than a few pratfalls in the mud, at times she seems to be rehearsing for her Molly Brown character which would come three years later. It's rather sweet really without getting sticky. The popular and Oscar nominated standard THE SECOND TIME AROUND comes the film though in the print I saw, the song is not sung but used, without lyrics, as part of the underscore. With Andy Griffith, Juliet Prowse (who, alas, gets to dance only briefly), Isobel Elsom, Eleanor Audley and Timothy Carey.

The DVD imported from Spain is an excellent transfer in its CinemaScope ratio (2.35) but not anamorphic.

butchReviewed in the United States on January 3, 2021
5.0 out of 5 stars
fun western
Verified purchase
1961 for this film , think it was the first western for Debbie Reynolds. Always liked this one for the pure fun of when she tells alot of the male stars off!! also gets in a few slaps in the face in on her costars! It's always great to see an example of strong woman taking charge.

L BoopReviewed in the United States on February 7, 2013
5.0 out of 5 stars
GREAT MOVIE
Verified purchase
THIS IS ONE OF THE FUNNIEST MOVIES OF DEBBIE REYNOLDS THAT I'VE SEEN. I LAUGHED UNTIL MY SIDES HURT. WIDOW GOES OUT WEST TO START WORK IN A STORE WITH THE HELP OF A FRIEND OF HER LATE HUSBAND. SHE LEAVES BEHIND TWO SMALL CHILDREN TO STAY WITH A STUFFY MOTHER INLAW TO START THE LIFE HER AND HER HUSBAND HAD DREAMED OF. THIS IS WHERE THE LAUGHING BEGINS. SHE GETS OUT WEST BY TRAIN, FINDS THE FRIEND HAS BEEN KILLED IN A ROBBERY, GETS HIRED ON AS A RANCH HAND ON A WOMANS RANCH, FALLS IN LOVE WITH A SALOON KEEPER / GAMBLER, GETS ELECTED SHERIFF. TAKEN HOSTAGE BY ROBBERS AND THE SAME ONES THAT KILLED HER FRIEND, AND THE LIST GOES ON. THIS IS A GREAT MOVIE TO SEE. GOOD WORK DEBBIE.
5 people found this helpful

Amazon CustomerReviewed in the United States on April 17, 2012
5.0 out of 5 stars
Debbie Reynolds comedy, western
Verified purchase
When a young widow (Reynolds) leaves a pampered life in New York for a job in the untamed west, she is unprepared for the challange. With determination and without experience, she hires on as the only ranch hand for a crusty old woman rancher (Thelma Ritter). Standing up to the town's crooked sheriff, the people of the community elect her to the office of sheriff. If the job isn't challange enough, the former sheriff and his deputies have threatened revenge against her and the town's people and two handsome men are doing what they can to woo and protect her. An enjoyable comedy with a great cast - a perfect venue for Debbie Reynolds.
10 people found this helpful

Rosemarie HofmannReviewed in the United States on August 26, 2017
5.0 out of 5 stars
Five Stars
Verified purchase
I love that movie, a greatn performance by Debie and all the cofactors Great love story
2 people found this helpful

J. GunterReviewed in the United States on April 10, 2020
5.0 out of 5 stars
The Second Time Around
Verified purchase
Debbie Reynolds is delightful in this comedy.

John R. SchwartzReviewed in the United States on January 30, 2017
4.0 out of 5 stars
Four Stars
Verified purchase
Always Enjoy A Good Debbie Reynolds flick! Don't ever remember seeing this particular movie, before! DEFINITELY, wasn't Disappointed!😊
See all reviews
Back to top
Get to Know Us
Make Money with Us
Amazon Payment Products
Let Us Help You
EnglishChoose a language for shopping. United StatesChoose a country/region for shopping.
© 1996-2021, Amazon.com, Inc. or its affiliates