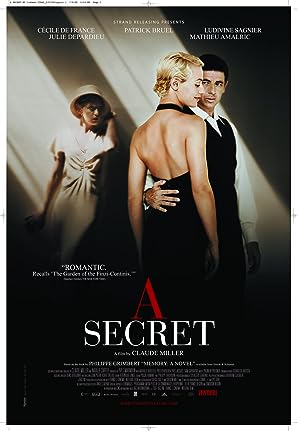 (208)
6.81 h 42 min2008X-Ray18+
A story of passion and guilt during the Nazi occupation of France which unfolds as a young teenager uncovers the truth about his parents' past.

Watch with Strand Releasing
Start your 7-day free trial
Add to
Watchlist
Redeem a gift card or promotion code
By ordering or viewing, you agree to our Terms. Sold by Amazon.com Services LLC.
Write review

zeusReviewed in the United States on February 8, 2013
5.0 out of 5 stars
Suicide by...concentration camp!
Verified purchase
This is a must see movie!!! Great plot, great acting, great direction, and all characters are well developed. Everything in this film is just fabulous.

The movie opens on the everyday life of a Parisian couple with a kid (a boy) after World War II. The boy is narrating the story as we move slowly in the plot. He is not that good in sports while both of his parents are really athletic. This is a significant detail. We feel that something is happening or happened in the past because during the first half hour, the whole plot is slow and puts the spectator in such a "malaise" that you are tempted to fast forward in order to understand what's going on. Don't do that!! Let the characters develop. You will be rewarded!

I was anxious to see what the role is for Ludivine Sagnier. I personally think that she is one of the best actrice worldwide. Period. Finally she appears half way through the movie and her presence is just overwhelming. She takes over the movie and SHE IS the movie all the way to the end.

Watch the movie carefully and you will understand my title. I cannot say more without giving the plot away.

Five stars all the way. One of the best movies ever!!!

Paul KaoReviewed in the United States on October 20, 2013
4.0 out of 5 stars
review of A Secret
Verified purchase
The film is from the point of view of a man remembering when he was a boy who isn't very athletic, but whose mother and father are. As a boy, he imagines he has a brother Simon who is as athletic as he himself is not. In his early teens, the neighbor (played by Julie Depardieu, Gerarad's daughter) tells him the truth where he learns his mother is not his father's first wife and his father had a son Simon by his first wife who was very athletic. It might sound like I'm giving the plot away, but this is not the "secret" of the title. The secret of the title is what happened to the family and friends during World War II. It's a very good movie and I recommend it. It's not a comedy, but a drama with a serious plot.
5 people found this helpful

AngeLightReviewed in the United States on July 11, 2017
5.0 out of 5 stars
Love!!
Verified purchase
I saw this movie for the first time on Netflix and kept it on my Netflix list but it disappeared. I'm glad I was able to purchase it on Amazon. I will watch my personal favourites several times over and in my view it is comparable to the English Patient, albeit minus the breathless landscapes and romantic aerial plane rides. The actors of
A Secret have only themselves against the despair of a holocaust backdrop to entice you and this they do brilliantly.
One person found this helpful

TheizzyReviewed in the United States on May 2, 2013
5.0 out of 5 stars
A remarkable film that will stay with you long after
Verified purchase
This is not a holocaust movie or a movie about victims, though it takes place during the worst times.
It is a sensitive movie about relationship. About friendship. and about making the best of what we are given.
I strongly recommend it. Claude Miller has made a wonderful spectacle. Soli
One person found this helpful

voltaireReviewed in the United States on September 9, 2011
4.0 out of 5 stars
What a secret!
Verified purchase
Un Secret is not just a "holocaust" film. It is a profound journey into a man's search for his identity. In some senses it is reminiscent of the the Oedipus story. Learning who one is sometimes has a high price. In this case, it is the loss of an entire personal history (and the discovery of another).
One person found this helpful

Tn DReviewed in the United States on October 31, 2012
5.0 out of 5 stars
Powerful Movie...Subtle.....Unforgettable....
Verified purchase
This movie will mark you profoundly. Beautifully filmed with soft gentle music this film delivers a powerful message. Holocaust was told implicitly with subtlety, without shocking images of violence, but with such power that the story becomes unforgettable.

MandyReviewed in the United States on November 29, 2017
4.0 out of 5 stars
Four Stars
Verified purchase
Good film although it could show more realism given the horrific situation

Amazon CustomerReviewed in the United States on January 29, 2018
2.0 out of 5 stars
Two Stars
Verified purchase
Decent story, and acting
See all reviews
Back to top
Get to Know Us
Make Money with Us
Amazon Payment Products
Let Us Help You
EnglishChoose a language for shopping. United StatesChoose a country/region for shopping.
© 1996-2022, Amazon.com, Inc. or its affiliates