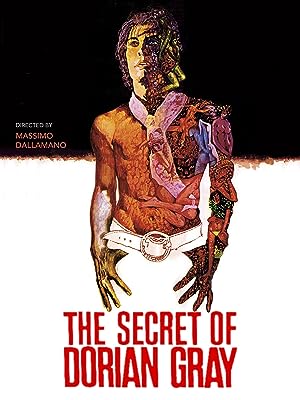 The Secret of Dorian Gray

RANDELReviewed in the United States on September 16, 2019
2.0 out of 5 stars
POOR OSCAR WILDE REDUCED TO EURO-TRASH
Verified purchase
As if Oscar Wilde didn't suffer enough, this third-rate director has turned his DORIAN GRAY into a sleazy excuse to film Helmet Berger either shirtless or riding around in sports cars while dreadful 1960's club music blasts away endlessly. This is a really really bad film! [Some of the sets look like those used in low-budget 1960's TV sit-coms.] And yet (I have to say) the film is closer in spirit to the novel than some of the newer films that have tried to turn the story into a more sensational horror-fest.
7 people found this helpful

4-Legged DefenderReviewed in the United States on October 7, 2011
5.0 out of 5 stars
ALL PROBLEMS RESOLVED!! NO MORE GRIPES!
Verified purchase
[THE SECRET OF DORIAN GRAY - (1970) - Widescreen Presentation - Directed by Massimo Dellamano - Italian with English subtitles] OK gents, it's time to stop moaning about the dvd problems from the first batch, RaroVideo has addressed this issue, and get on with the merits of the movie and the remastered transfer. The picture quality is absolutely gorgeous, the colors rich and vibrant, so much so they pop out at you constantly, the contrast is bold and the aspect ratio appears perfect. It's nothing short of breathtaking for a 'lost' film released for the first time for home consumption in any format.

The film itself is a mod 60's update of Oscar Wilde's famous story (which is better than any theatrical version yet made - the best adaptation is the 1945 version, 'The Picture of Dorian Gray' starring George Sanders IMO), but the swinging sixties London scenario adds a new touch to the tale. Helmut Berger is cast as the foppish pretty boy who never ages, but has a portrait of himself in his attic that doesn't look so good. Swiss sensation Marie Liljedahl ('I, A Woman', 'Inga' and 'The Seduction of Inga') is his aspiring actress girlfriend who is eventually cast aside as Dorian falls prey to those who gradually corrupt his morals as he climbs a social ladder of conceit and decadence. Herbert Lom is his benefactor and initial prime source of corruption, but soon Dorian becomes his own monster, devouring well-known Euro-lovelies Margaret Lee and Maria Rohm, among other various vixens clamoring for a dalliance with Dorian. Director Massimo Dellamano ('What Have You Done To Solange', 'Night Child' and the original 'Devil In The Flesh') creates a hyper-reality and sumptuous visual feast in lieu of any dramatic embellishments to the story, so no major plot surprises are in store for us, yet it still holds a certain fascination for those who enjoy sixties cinema (even though it was made in 1970, it was still the 60's until 1972 - ask anyone who was there or wrote a book on cinema from that era) and European films. The Great Britain/Italy/German co-production is understandably schizophrenic, but this too adds a psychedelic psychosis rather than detracts, at least it did for me.

The highly-touted sexual aspects of this film are quite tame by today's standards and thus were a letdown; after all, what respectable gent wouldn't eagerly eyeball the luscious ladies listed above in their undraped splendor? There is some nudity but precious little for that era of permissiveness. Overall, the film was still 4 stars for me (others may only deem it 3½), but I feel compelled to add the fifth star to counterbalance the many bad reviews the actual film suffered as a result of the initial pressing's defections. Those negative reviews will cost this enjoyable flick many viewers who just see the review stars and aren't aware of the film's unique merits. All fans of a good gaillo and Eurohorror buffs will also enjoy this film, and I hope RaroVideo continues its trend of offering stateside releases of other rare European films in such lavish, remastered presentations.
26 people found this helpful

SeraphimTheOrthodoxReviewed in the United States on November 12, 2019
4.0 out of 5 stars
Go-Go Dorian B Goode!
Verified purchase
Always up for yet another film adaptation of Oscar Wilde's allegedly most disliked work, I've seen FIVE adaptations of The Picture of Dorian Grey and I lay wager there's yet another hiding somewhere. I couldn't say what the worlds most LOVED story is, but I can say w/o reservation there ain't FIVE adaptations to film of it lol. Makes sense to me. Well I was always transfixed by the story and cant wait to see what happen to his portrait in each one. However, being such an enthusiastic fan, I've yet to read the novel and I know I need to lol.
2 people found this helpful

Paul J AmouryReviewed in the United States on March 11, 2022
2.0 out of 5 stars
Worst of teh 70's
Verified purchase
This could have been a good movie. The script seems to flow well and could have been better but it is the style of teh 70's so a bit corny as it is. Some of the filming is good; however, the music and go-go dancing style of the late 60's - early 70's is awful. There is lots of skin shown but again the filming style is not that good and the color comes and goes, so makes it hard to watch. Some of the music it just gruesome, I had to put it on mute.

Chuck SnowReviewed in the United States on May 25, 2011
5.0 out of 5 stars
They fixed it!!!
Verified purchase
October, 2010: This is a complete reassessment of my previous (negative) review about what was a defective product. When I noticed that Amazon (as opposed to the Marketplace) was carrying this DVD again I figured it was safe to re-purchase it, and I was right. Well, fair is fair, I did get an instant refund and a promise for defect correction, thus my "new" review. I will not bother to describe the familiar plot since most folks have surely seen one or more versions of this often told tale.

The print is first rate color and anamorphic, and absolutely tack sharp and at a bargain price to boot ($12-$13). I have bought other Raro Video DVDs and their product merits to be rated right up there with Criterion.

The film itself is a fun 70's romp through a world of "decadence." It still keeps the Victorian belief that sexual promiscuity is "evil." Berger is perfectly cast as the hedonistic Dorian, while Herbert Lom (as usual) steals every scene he's in as the painter of the infamous portrait. The leading lady does not fare as well in a role that has always proven to be quite thankless, while Italian legend, Isa Miranda, shows up to play an "older" rich predator, dripping in diamonds and fancy rags. The film was quite "scandalous" in its day, but by now has lost that "shocking" sting.

The DVD presents this opus in two languages, Italian (the main track), and in English. Since the film takes place mostly in London and the cast is actually speaking English, I found the Italian track distracting, so I switched to English and it worked better for me.

SV AlbatrossReviewed in the United States on June 29, 2022
1.0 out of 5 stars
Awful
Verified purchase
Awful movie, Low budget, not as described in the description but it was on a $.99 so it’s not like I’m out a lot of money. 10 minutes is all I can handle before I turned it off. Very slow and dry

B. WellsReviewed in the United States on September 29, 2011
3.0 out of 5 stars
Picture Perfect (The DVD, That Is)
Verified purchase
After perusing the reviews of other buyers recounting their problems with copies of "Il Dio Chimato Dorian", I was, admittedly, somewhat reluctant to purchase the DVD, even after reading that those problems had been corrected. However, for the price, I decided to take a chance, and I'm glad I did. The quality of the DVD is flawless, with none of the pixillation problems reported in earlier copies. Though stylistically, the film is somewhat dated, reflecting the time period in which it was made (swinging late sixties), the (corrected) digital restoration is amazing.

Aside from updating Oscar Wilde's classic to 1960's London, director Massimo Dallamano doesn't stray too far from the source material, although it may seem like it at times. Helmut Berger, perhaps the most beautiful man ever committed to celluloid, certainly looks the part of the dissolute and ruthless rake, and his performance as Dorian is credible, as well. His descent from callow youth into real evil doesn't seem too difficult a journey with the estimable Herbert Lom (Peter Sellers' nemesis in "The Pink Panther" films) urging him on every step of the way. Marie Lilljedahl makes a lovely impression as the unfortunate actress, Sybil Vane, whose brief screen time is spent, largely, undressed. A larger cast of European stalwarts move in and out of Dorian's orbit (and bed) before he gets his comeuppance in the final scene, which divulges from Wilde's novel.

The problems remaining with the DVD are the problems contained within the movie, itself. At 93 minutes, it still seems too long. There are slow scenes with characters who just aren't that interesting, while other roles should have been expanded; in some cases, the plot builds up the viewer to expect more than what eventually happens, making it a sometimes tedious and disappointing undertaking. Overall, I think "Il Dio Chimato Dorian" is best enjoyed as a period piece (NOT a Victorian period piece) with beautiful looking people doing naughty and, occasionally, unspeakable things to each other, and exhibiting a good deal of skin in the process. I've found much worse ways to spend $12.
5 people found this helpful
See all reviews
Back to top
Get to Know Us
Make Money with Us
Amazon Payment Products
Let Us Help You
EnglishChoose a language for shopping. United StatesChoose a country/region for shopping.
© 1996-2022, Amazon.com, Inc. or its affiliates