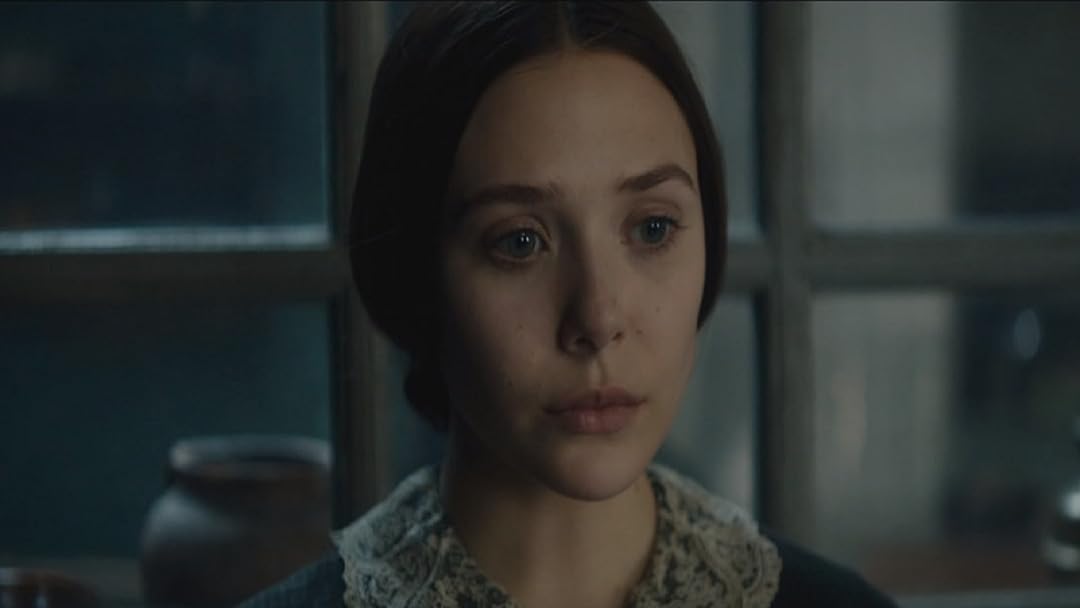 (794)
6.11 h 46 min2014R
Set in the lower echelons of 1860s Paris, Therese Raquin, a sexually repressed, beautiful young woman, is trapped in a loveless marriage to her sickly cousin Camille by her domineering aunt, Madame Raquin.

D. H.Reviewed in the United States on April 13, 2014
5.0 out of 5 stars
A hypnotic, sexy, and unfairly ignored costume drama with an ace cast
Verified purchase
From its first frame onward, In Secret is a Gothic, hypnotic, often sexy, and at times disturbing story of people who, either by choice or because of fate, become imprisoned within negative circumstances and spin further and further out of control. The film opens with a wayward father leaving his daughter, heroine Therese, at the isolated home of his sister and her ill son, Camille. The aunt is portrayed by Jessica Lange with the regal and steely quality in which she now specializes and uses to steal scenes on the television hit American Horror Story. Coming of age, Therese is forced to be at once best friend, guardian angel, and nurse to the wan Camille. Later, she is forced also to be his wife on the eve of the family's move to Paris. There, they purchase an out-of-the-way shop and reunite with a friendly past acquaintance, Laurent. Artistic, confident, and masculine, Laurent is the antithesis of her husband. He and the previously cold and sequestered Therese become clandestine lovers and plot to stay together at any price.

In Secret possesses every ingredient of a top-notch costume drama and erotic suspense film. The performances are engaging and vibrant, which is no surprise since leads Elizabeth Olsen (as the adult Therese) and Oscar Isaac (as Laurent) are among the brightest talents of their generation. She in particular perfectly captures the dynamic of her character, a woman who reveals menacing dimensions of her character out of justified desperation to escape her static domestic existence. Each note of anger, desire, fear, and guilt rings true. This authenticity reveals and animates a century-old story, scandalous in its day, for a jaded modern audience. The production itself is gorgeous in its cobwebs and shadows and stones and general grit, with Hungary and Serbia standing in well for 19th-century France. Call it seductive decay, never more so than during a delirious nocturnal visit to a slaughterhouse. And the plot is rich and told with theatrical flair, from the way the character arcs complicate our initial understanding of each player to a spectacular ending which is haunting and, in a macabre way, satisfying in its ghastly inevitability.

D.H.Reviewed in the United States on December 2, 2020
3.0 out of 5 stars
MEH! NO TIMELINE!
Verified purchase
Everything in this movie happens quickly, and without warning. One moment it's one day, and the next thing you know it's somehow 8 months later?! It's as if they had no experience & decided to stick to the juicy parts & to hell with the rest that holds it together. It also should've came out back in the 90's like it was supposed to be because this is nothing new. It's basically Shakespeare on film. Tom Felton couldnt have been any more of an annoying fairy if he tried, and was clearly going to end up with his mother while secretly carrying on some homosexual relationship. Then there's the "guests" who seem as if they never leave because there's no timeline & considering how all over the place this movie is it definitely needs one. I couldn't even figure out why they were suddenly at each other's throats, and that's because somehow almost a year went by without there ever being a break, or something to let you know that it's a different time. It comes across as a movie full of some seriously disturbed people who are on one helluva emotional rollercoaster, simply because of the seemlessness between timelines. The only reason I finished it is because I had already watched the majority of it, but it's definitely not a movie that will be watched a second time that's for sure.
One person found this helpful

MyOpinionReviewed in the United States on October 7, 2018
4.0 out of 5 stars
An Interesting Drama...placed in mid-19th Century France
Verified purchase
Set in France in the 1860's a young orphan girl is left to grow up in the domineering shadow of her aunt and weak chronically ill cousin, Camille. With little chance of choosing her own destiny, the girl, Therese, is forced into a loveless marriage where she must assume the role of nursemaid to the husband of her aunt's choosing. The family of three relocate to Paris where fate intervenes and Therese finds herself in a reckless affair with artist and family friend, Laurent, under the noses of her aunt and Camille. The remiss relationship leads to irreversible decisions with devastating consequences for all involved.
Stars Elizabeth Olsen, the very talented younger sister of the Olsen twins, Tom Felton of Harry Potter fame for his role as Malfoy, Oscar Isaac, yes, the same man who played Joseph in The Nativity and Jessica Lange who continues to amaze us with her intense diversity of roles and characters. Echoes of "A Place in the Sun" resounded in my mind. Not your typical Victorian-Bella Epoque period film...racy, reflective and regretful...definitely not your typical "3 R's"!
3 people found this helpful

SusanneReviewed in the United States on September 9, 2015
4.0 out of 5 stars
Period Romance With Good Drama
Verified purchase
Very well done. Great acting by Olsen and Isaac, and good chemistry.

I personally believe that Therese and Laurent did love each other. This is made clear in the scene at the park, when Laurent has his head in Therese's lap, as well as the very end. The hatred that manifests later is primarily their self-hatred and guilt projected onto one another.

Imagine how these two feel so trapped, yet so unwilling to do something improper or offensive (by continuing the affair indefinitely or ending Therese's marriage), that they both agree that murder is the best option. That's a pretty stifling culture.

I was thrown off by Laurent's mention of money--especially because a shop-owning family would be considered middle-class, not wealthy--but I believe his guilt causes him to act irrationally, yet in accordance with this self-image of being a thoroughly evil person (Why show any restraint at this point?). Notice how he takes to heavy drinking and sleeping around--behaviors there were no signs of previously.

I had to laugh at one reviewer's claim that the sexual relationship was ridiculous. I agree that the two lovers were highly sexual, but they were pretty young, having an affair (which is inherently exciting, I'm sorry to say), and appeared to be getting together once a day. Not too weird in my book. Maybe in the context of the time, it seems shocking.

I will definitely read the story after having watched this.

Walt KurtzReviewed in the United States on May 22, 2014
5.0 out of 5 stars
Outstanding Film - A bit of a Gem
Verified purchase
In Secret recalls a time when less was more and audiences were not inured to sex and violence as they are today. Yes the core idea of the protagonist marrying her cousin and then taking his best friend as her lover still has a ring of scandal but it is handled gently and sensitively in this film rather than cudgeling the audience with gratuitous baroque abandon.

The standout in the cast is Jessica Lange. Her career renaissance has been a pleasure to observe. She takes some big risks here and they pay off hugely. I am so surprised that her name did not come up in awards season. She should have been on someone's radar.

Oscar Issac is clearly a star on the rise and it show in his portrayal of the brutish Laurent. He is at turns desirable, deceitful, libertine and lover. Matched with Issac is Elizabeth Olsen whose luminous eyes could light the whole interior of Lange's drab shop. Olsen is a talented actress and serves the film well.

Lastly I must mention the supporting players. All are uniformly excellent and it is great to watch skilled character actors ply their craft with such dexterity.

See In Secret. It is a find.
46 people found this helpful

Richard W DowReviewed in the United States on November 9, 2015
4.0 out of 5 stars
It does not disappoint. All actors do superb work here
Verified purchase
The opening credits tell the audience that we are watching an adaptation of an Emile Zola novel. It does not disappoint. All actors do superb work here, with Jessica Lange delivering another astonishing performance. Star-crossed lovers never had it so good - or so bad, once the tables are turned. Every aspect of the characters is fully explored, I think, and as their fates unravel, I found myself caring about them in ways that surprised me. In Zola's world, apparently, there was no sunlight in Paris for anyone, and if the clouds had broken, the people in this novel would have fitted them securely back in the firmament again, on their way to the next compulsive transgression and classic denouement. It's that kind of story, and that kind of movie, done expertly.
2 people found this helpful

MAYA PINIONReviewed in the United States on July 8, 2014
4.0 out of 5 stars
Awesome!!!!(quiet,steady wins the race- bit the boredom kills!)
Verified purchase
Excuse me people, but I find as time goes by-most will not read a review , unless it's titled with the original (awesome ! )
Worth viewing!!! If you're an adolescent who expects shoot em out sex... Harry potter Disneyland adventure----- forget it.
But, if you relish period pieces, unadorned, uncontrollable passions, dependence, love/hate relationships .... Yes... Watch !
Was so surprised this got stinking reviews in a very limited release...
Lange rips ur heart out, Elizabeth is to be pitied like madam bovary---- even the circle of friends was so authentic, u pitied character therese deeply...
Leading a life of " quiet desperation" she clung to the lover like he was a buoy.
Ending was dramatic--- but u get the point.
3 people found this helpful

WilfReviewed in the United States on July 9, 2022
2.0 out of 5 stars
Depressing lust doesn't pay kind of film
Verified purchase
Love period films. Gorgeous scenery and Jessica Lange. The rest, MEH. Every other scene is a couple who appears to be enraptured with the idea of being naughty and getting caught. Voyeuristic and Boring.
See all reviews
Back to top
Get to Know Us
Make Money with Us
Amazon Payment Products
Let Us Help You
EnglishChoose a language for shopping. United StatesChoose a country/region for shopping.
© 1996-2022, Amazon.com, Inc. or its affiliates