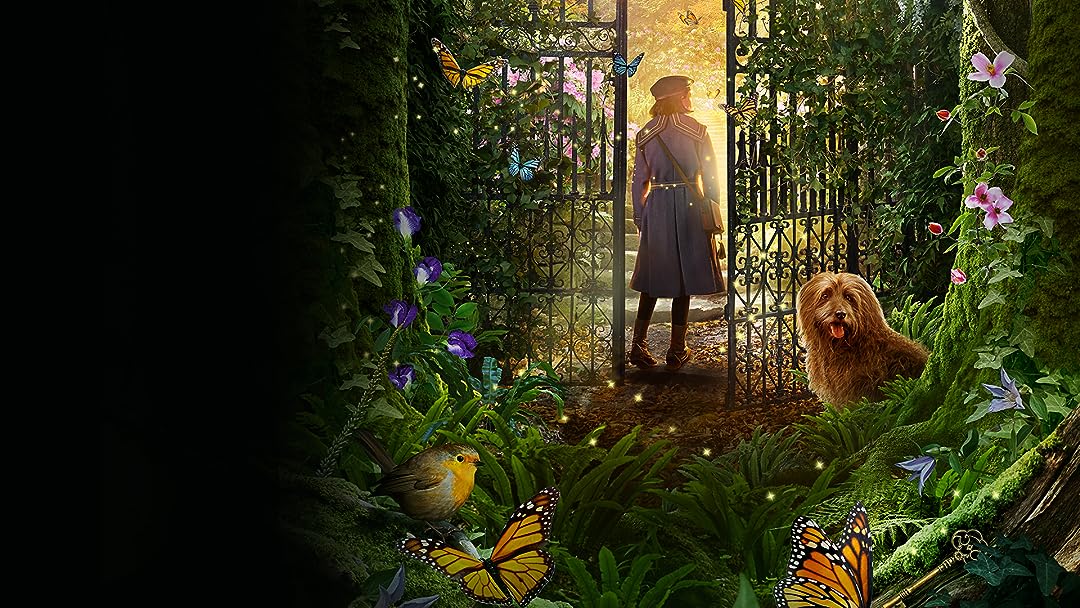 (11,033)
5.61 h 39 min2020X-RayPG
A new take on the beloved classic novel, a young orphan girl who, after being sent to live with her uncle, discovers a magical garden on the grounds of his estate.

BWBReviewed in the United States on August 8, 2020
1.0 out of 5 stars
Let's Keep this Garden a Secret
Verified purchase
This 2020 adaptation of THE SECRET GARDEN will transport you to...absolutely nowhere. A choppy, patched-together plot line, one-dimensional performances by all the child actors, such a lack of character arc that you can't possibly care about or identify with anyone, a complete waste of Colin Firth's abilities, and a 1947 setting that makes zero sense are what lie ahead for the viewer. The director must have had some kind of vision, but we'll never know what it is. The irrelevant, unnecessary add-ons and modifications to the book are countless. If you mute the audio and play the film while listening to music you enjoy, you may feel mildly inspired. In fairness, the cinematography is beautiful. Beyond that, prepare to enter a mysterious world that desperately wants to be magical and inspiring, but falls woefully short of that goal. This garden is best left closed to the public.
136 people found this helpful

TontheosReviewed in the United States on August 12, 2020
1.0 out of 5 stars
Horrible Adaption
Verified purchase
For those who have actually read the book and are looking for a true adaption of the novel, this is NOT it. This movie was so far from the actual story that to even say that it is "loosely based", is a gross understatement. I read this book out loud to my kids for several weeks each night and they were anticipating this release with such eagerness. My five-year old keep on complaining, "Mom, this is not in the book!" Not sure what they were going for here, but definitely a disappointment on every level.
94 people found this helpful

ChrisReviewed in the United States on August 8, 2020
1.0 out of 5 stars
Not as good Not as good as the trailer appeared
Verified purchase
I was looking forward to this version of The Secret Garden for a long time. The trailer looked amazing but as I watched it, I became very disappointed from the start. Perhaps I'm just stuck on the 1993 version with Maggie Smith? I haven't read the book which gives me a dis-advantage but both versions are very different yet similar in parts. I'm not sure how to really describe it? Was the version the correct one from the book? If so, then the 1993 version was much better! This version, I think most of the issue was not being able to connect with the characters? There was a feel of boredom....The music was not connecting with me or the story. The visual effects was of course easy due to the technology that's out today.

Colin Firth, is a great actor and he did well in this however again, there was no mystery, no connection to his character. I don't blame him, I blame the writing. I gave one star for the attempt but I did not personally enjoy this version at all. On a side note for the music....For a magical beautiful story, the music should have been able to touch the viewer in a way that connected emotion to the characters and the story....the music for me failed in that completely. I support the Movie industry but I hated that I spent $20 for this.

Kindle CustomerReviewed in the United States on August 10, 2020
2.0 out of 5 stars
um....no. just...no. just burn it all and keep it burnt down
Verified purchase
That's 20 bucks I will never get back for renting a theatrical release. But I am a sucker for The Secret Garden. As remakes go...so much right...and soooo much wrong. Possibly be best casting was Dickon and Martha...but the writers kinda ruined it. The writers also ruined Mr Craven... in the book and other adaptations you kinda feel a bit sorry for him, you grow to like Mary, you kinda like Colin...you start out liking Martha and Dickon... I got to the end, and didn't like any of them, I mean well cast and played as well as they could with the writing but... urg. I think the movie was mostly to be a CGI show off. The trailer made it seem a lot better. Music...weird, some places it seemed right and went with the movie well and other times it was like, maybe if I was high on drugs this would make sense. Basically the only thing good in the movie is the dog. Its set in 1947...rationing was still on in England, so character getting that deep of a bath...not happening. Of the remakes around the wars, I think Hallmark did it better. I think this would have been a better movie had they not tried to have a fleeting kiss with the book and pretend its "based upon". For those saying 10 yr olds don't talk that way...remember these were kids left on their own with educational books, they're gonna talk older then they are. Anyways, if you don't look at it as a The Secret Garden remake, or even have anything to do with The Secret Garden, i think you'll enjoy the movie...if you go into this as a remake...you're gonna have a bad time. 2 stars, Casting and the Dog. Everything else, burn it all and kept it as ruins.
51 people found this helpful

Amazon CustomerReviewed in the United States on August 8, 2020
5.0 out of 5 stars
Very Inspirational! A movie we need in 2020!
Verified purchase
Excellent movie! My 12 year old told me to leave this review. Left him in years of happiness with it's message of hope, healing and the importance of a positive mental attitude! He has battled depression himself and this movie very much spoke to his soul.
39 people found this helpful

Lyudmyla KolyesnikReviewed in the United States on August 7, 2020
1.0 out of 5 stars
Not worth the money
Verified purchase
Terrible
33 people found this helpful

dawn messmerReviewed in the United States on August 8, 2020
5.0 out of 5 stars
Truly Magical!
Verified purchase
This film captures all the magic and wonder of the original Secret Garden novel and leaves the viewer feeling absolutely transported into the story. The movie itself is positively beautiful and artistic to watch and presents an adaptation of the classic story that is both familiar and full of delightful surprises! The characters which bring this story to life could have jumped right out of the original work, and it was such a joy to see them played with such care and tenderness by very impressive actors! Most importantly, this film kept, at its core, the heartfelt themes of friendship and the healing power of hope which made the novel a classic, and it leaves the viewer uplifted and smiling. Long-time fans will love this truly magical adaptation of the beloved novel, and newcomers will fall in love with this beautiful, classic story brought to life! Absolutely worth the money to rent!
27 people found this helpful

Angela HayesReviewed in the United States on August 7, 2020
5.0 out of 5 stars
So Very Well Done. &lt;3
Verified purchase
The most lovely version of this beloved book! Totally worth the 20 bucks! I was transported. Well Done. <3
25 people found this helpful
See all reviews
Back to top
Get to Know Us
Make Money with Us
Amazon Payment Products
Let Us Help You
EnglishChoose a language for shopping. United StatesChoose a country/region for shopping.
© 1996-2021, Amazon.com, Inc. or its affiliates