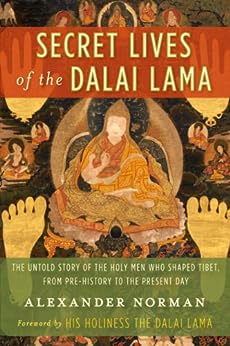 Secret Lives of the Dalai Lama: The Untold Story of the Holy Men Who Shaped Tibet, from Pre-history to the Present Day Kindle Edition

“I commend this book to anyone wishing to deepen their knowledge of Tibetan history and culture.”
– His Holiness the Fourteenth Dalai Lama

“Secret Lives of the Dalai Lama provides the modern reader a most insightful description of Tibetan history and culture. Engaging, accessible, and scrupulously fair in its treatment of the subject, perhaps its greatest merit is that it offers a new and rich way to appreciate the life and work of the present Dalai Lama.”
– Thupten Jinpa, PhD, Tibetan scholar and the principal translator to the Dalai Lama


From the Trade Paperback edition.

ALEXANDER NORMAN has known His Holiness the Dalai Lama since 1988 and has previously worked closely with him on his bestselling books Freedom in Exile and Ethics for the New Millennium. He is currently a member of Blackfriars Hall at the University of Oxford. --This text refers to an alternate kindle_edition edition.

4.3 out of 5 stars
4.3 out of 5
18 global ratings
How are ratings calculated?
To calculate the overall star rating and percentage breakdown by star, we don’t use a simple average. Instead, our system considers things like how recent a review is and if the reviewer bought the item on Amazon. It also analyzes reviews to verify trustworthiness.
Top reviews

Lou Gottlieb
3.0 out of 5 stars A non-spiritual history
Reviewed in the United States on January 22, 2011
Verified Purchase
This book treats Tibetan Buddhism and its spiritual accomplishments and practices in a very cavalier fashion, focusing instead on the military and political history of the leaders of Tibet. It is surprising how many deaths, wars, political intrigues, invasions, etc. Tibet had, but to omit the spiritual is to skew the picture. Even in a conventional historic sense, one has to ask how many countries (China, Russia, etc.) would fare worse in a historical review than Tibet.
Read more
Helpful
Report abuse

Jill
5.0 out of 5 stars wonderful read!
Reviewed in the United States on March 28, 2010
Verified Purchase
This is a wonderful read... I would highly recommend it to anyone interested in buddhism.
Read more
2 people found this helpful
Helpful
Report abuse

Jane Illinger
5.0 out of 5 stars Secret Lives of the Dalai Lama
Reviewed in the United States on April 5, 2010
Verified Purchase
An excellent introduction to the history of Tibetan Buddhism and the god-rulers, the Dalai Lamas.
Read more
2 people found this helpful
Helpful
Report abuse

Brian Griffith
4.0 out of 5 stars The hardball game of leading Tibet
Reviewed in the United States on March 21, 2015
Norman's history honors religious myth as a real force in people's minds, but he also wants to expose the harsh realities of competition for leadership. His saga of Tibet's mythic sages and its 14 Dalai Lamas is roughly as violent as the tale of any other nation. In its juxtaposition of real spirituality with political intrigue, the tale rivals that of the Catholic papacy. And even now, despite the present Dalai Lama's full endorsement for a constitution separating elected political authority from spiritual leadership, the controversy rages on. The very fact that the Dalai Lamas won international admiration as spiritual guides made their patronage a bone of aggressive contention between Mongolian and Chinese warlords. Within Tibet, Norman exposes the competition between sects as an often ruthless struggle for influence, with some sects demanding complete sectarian and ethnic exclusivity toward the "pollution" of outsiders. Norman maintains that this history of struggles ultimately shows the greatness of Tibet's people and their faith, and no doubt he is right. But in showing just how hard the struggle to find and follow a middle path has been, he ends up giving surprisingly little attention to the actual teaching of the Dalai Lamas. Unlike Reginald Ray's "Indestructible Truth," which focuses almost entirely on the evolution of Tibetan spiritual teaching, Norman's story highlights the politics. It's just one side of Tibet's story, but it's part of the reality to be worked through.
Read more
Helpful
Report abuse

M. Bailey
5.0 out of 5 stars A serious history
Reviewed in the United States on February 10, 2012
Despite the title, this is a serious history of the institution of the Dalai Lama, Buddhism in Tibet, and Tibet and its neighbors: three topics inextricably connected.

Beginning with the pre-history of Tibetan myth (that is, myth to non-Tibetans), Norman spends the first half of the book explaining the concept of Chenrezig, the Bodhisattva of Compassion, and his personal interest in Tibet and history of reincarnating in human form throughout Tibet's history. By the second half of the book we reach the 16th century, when Chenrezig's rebirth was formally given the name of Dalai Lama and applied for the first time to the man who became known as the 3rd Dalai Lama. (The two immediately preceding incarnations were retroactively proclaimed as the 1st and 2nd.) Each Dalai Lama is then given a chapter or more depending on his significance, along with detail on his family and background, as well as on the actions of the various Buddhist hierarchs and sects in selecting him as the incarnation, training him, and running the country during his minority. Norman examines the rise and fall of each Dalai Lama's control of the religious and secular institutions of his day and the resulting fortunes of Tibet in relation to its neighbors, especially Mongolia and China. The final chapters bring us up-to-date with the current Dalai Lama and Tibet's ongoing struggle to maintain a presence distinct from that of China.

Footnotes, a 22-page bibliography, and a detailed index are included. The author is a long-time acquaintance of the current Dalai Lama, with whom he has co-authored several books and who wrote the forward to this one. The reader would have been well-served with a few maps, a glossary, and charts showing the succession of Dalai Lamas and their earlier lineage, but even without these I highly recommend this book for anyone with an interest in the Dalai Lama and his religious background, Tibet and her woes, or Tibetan Buddhism in general. It is hugely informative and compulsively readable, honest in its appraisals (the author is quite forthcoming about the personal and professional shortcomings of the incarnations and other main characters), and gives the reader a solid basis for understanding what's happening between Tibet and China.

Rob Fitzgibbon
4.0 out of 5 stars More Borgias than Buddhas
Reviewed in the United States on March 23, 2012
Pros and cons on Alexander Norman's "The Secret Lives of the Dalai Lama"

- The book is a fantastic lesson on the history of Tibet, origins of Tibetan Buddhism and the institution of the Dalai Lama and of course the nation's complicated relations with China

- Excellent coverage of some of the more esoteric points of Buddhist dogma and Tibetan iconography, for example the explanations regarding Abhidharma cosmology and the cult of Dorje Shugden are particularly well done

- Documents how the history of the Dalai Lama is filled with violence, geopolitics, hard-nosed power-grabs and other less enlightened emotions. Folks who prefer their Tibetan Buddhism to be limited to slim volumes of vapid exhortations and comfy meditation cushions will probably take issue with some of the facts presented here. Those with rose-tinted, lotus-shaped glasses - prepare to have them cracked.

- Probably not one of the intentions of the author, but the book really illustrates that the current 14th DL quite well may be the best of the bunch

Cons:
- No maps and no information graphics, so at times its difficult to keep all the locations and the protagonists straight