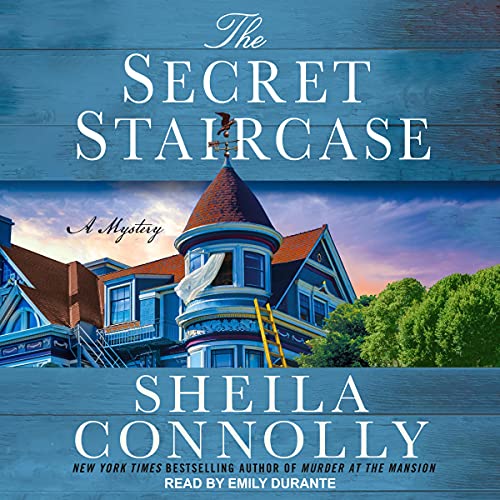 Kate Hamilton is feeling good about her plans to recreate Asheboro, Maryland, as the Victorian town it once was. Even two recent murders aren't enough to discourage her: After she helped to solve them, she put them behind her.

Now comes the time to make real plans, and her first goal is to renovate the Barton Mansion on the outskirts of town. Luckily, it's been maintained in good condition in the century since the wealthy Henry Barton lived and died there. But when the contractor gets started, he discovers a staircase that had been walled in years earlier. And of course, given the way Kate's luck has been going, there's a body on the stairs.

After the first shock, Kate is relieved when the autopsy reveals that the man had died around 1880. Unfortunately, it also reveals that he had not died a natural death - he had been murdered.

So Kate and Carroll Peterson, who Kate had drafted to sort through Henry Barton's papers, start a hunt to identify the man and why he died at the Barton Mansion. But when a second body is found - this time from the present day - Kate realizes that someone may not be so keen on her digging up the past....

Your audiobook is waiting!
Learn more about membership
List Price: $17.49
You Save: $2.19 (13%)
By completing your purchase, you agree to Audible’s Conditions Of Use
Sold and delivered by Audible, an Amazon company

Marivale
5.0 out of 5 stars Satisfying but sad
Reviewed in the United States 🇺🇸 on August 27, 2021
Verified Purchase
I’ve loved all the books Sheila Connelly wrote. Her characters and their stories have always been so well-written and interesting that I can recall each series clearly. I will miss more of her stories but hope her family takes comfort in the pleasure her writing gave to so many people. She lives on in those books and that is a wonderful gift to leave behind.
Read more
10 people found this helpful
Helpful
Report abuse

Linda J. Monfette
5.0 out of 5 stars Well documented and written
Reviewed in the United States 🇺🇸 on September 30, 2021
Verified Purchase
This book combined history with fiction. Sheila likes to spread out her clues to her mysteries. People who like mysteries with factual background will like this story.
Read more
One person found this helpful
Helpful
Report abuse

Jean Marie Kolinofsky
4.0 out of 5 stars An entertaining mystery
Reviewed in the United States 🇺🇸 on August 24, 2021
Asheboro, Maryland is a town that is dying. At one time a factory provided a living for its’ residents. When the factory closed the people looked elsewhere for employment and population dropped. Now the Asheboro Revitalization Project is working to bring tourism to the town by developing it as a Victorian village. This was Kate Hamilton’s suggestion and she has taken on the responsibility of managing the project. Kate grew up in Asheboro but left after high school. With a background of working in the hotel industry, she was called back to the town by an old friend who asked for her help. The centerpiece of her project is the Barton Mansion. Built in the 1800s, it was abandoned after the death of Henry Barton but still has most of the original furnishings. Kate expects problems with restoring plumbing and electricity, but a hidden staircase with a hundred year old body on it is more than she anticipated.

This is the third book in Sheila Connolly’s Victorian Village Mystery series, but she provides enough backstory to enjoy it on its’ own. Kate is assisted by Carroll, who specializes in researching resource collections, and Josh, a history professor from Johns Hopkins University. While they have found letters and articles on Henry Barton and his factory, little is known about his wife Mary. This becomes the center of Carroll’s research while Kate interviews contractors for the restoration of the mansion. She hires Morgan Wheeler who is passionate about the restoration of older homes and is familiar with the mansion. From the first day, however, there is trouble with Morgan’s crew. As if an old body isn’t enough trouble, a second body is soon found at the site. This is a recent death and Kate must clear her crew of suspicion.

Connolly reveals the story of the Barton Mansion and the family that lived there. It is a story of history and heartbreak that also reveals a surprising connection to a current resident of the area. Even though the plot of The Secret Staircase revolves around the mansion’s restoration the town still faces renovation, providing ample opportunity for more mysteries to come. This is more than the revitalization of a dying town. It is also a story that brings a community together and provides a solid mystery. I would like to thank NetGalley and St. Martin’s Press for providing this book for my review.
Read more
Helpful
Report abuse

Anne R. Marshall
4.0 out of 5 stars A big city girl in a small town renovating a Victorian mansion. Lots of history.
Reviewed in the United States 🇺🇸 on August 26, 2021
The Secret Staircase by Sheila Connolly is the third in the Victorian Village Mystery series and the last she wrote before her death (with some help from her daughter). We find ourselves in Asheboro, Maryland toward the beginning of the refurbishment of the home of Henry Barton, which will become a sort of living history museum and meeting place for the community. At the head of this project is Kate, who grew up and then moved away and has now returned to her small town home. She is ready to begin and has gathered her board to layout the steps forward. Her major items are finding a construction company to manage the job and having her researcher find out more of the personal life of Henry, and especially, his wife, Mary. Maybe a book? Carroll has arrived from Philadelphia, having convinced her professor that the research she would do this summer would be worth of college credit, and Kat is about to interview three construction companies. The next couple of weeks were to be epic!

It's a shame this series is over already, almost before it began. Kate is a big city manager learning to function in a small town. That is no easy feat. It is happening, though. Her boyfriend, Josh, is a college professor of history, which helps and she has community support. Many things happened in these few weeks: a hundred year-old body is found plastered into the wall, and a fresh one on the basement steps. Curious things are discovered through diaries, censuses, and old newspapers. As in any genealogical project, things that had been secrets tend to turn up. As in any murder investigation, even the smallest clue might be helpful. The best investigators keep their ears open and have a mind for puzzles. Kate certainly did. This was a lovely little mystery, especially the one about Henry and Mary Barton and their family. The past makes such a difference. We will miss you, Sheila Connolly.

I was invited to read a free e-ARC of The Secret Staircase by Minotaur Books, through Netgalley. All thoughts and opinions are mine. #netgalley #minotaurbooks #thesecretstaircase
Read more
Helpful
Report abuse
See all reviews